Game Informer has been a publication in the gaming section for a long time, somewhere in the neighborhood of 20 years. While their mainstay has been physical publishing of their magazine as well as their website, Game informer is now expanding their digital magazine offering onto Android for tablet owners.

Game Informer covers pretty much the entire gaming industry from consoles to PC and, of course, mobile. Their digital magazine is already available on iOS and now, if you own an Android tablet, you can get hooked up with the publication as well. Before you get all excite and rush out to grab their new app, there are a couple of key points to know.

First, and probably the most important point, is that this digital magazine is for tablets only. Expanding further on that, it is actually for 10″ tablets. If you own a smaller tablet you can get the publication but there is no guarantees that there won’t be any errors or that everything functions properly. Unfortunately that eliminates a rather large chunk of the Android user-base. 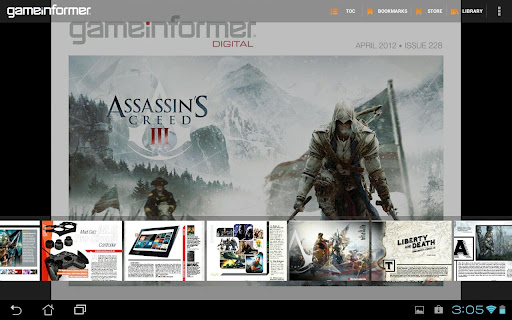 The next point that is also important is that this publication will soon be subscription-based one. While you are able to buy individual issues for $4.99 right now, you can get yourself hooked up in the near future with 12 issues (a whole year) for $19.99. Currently that option is not available but is coming soon. The $19.99/year subscription fee is a much better deal than the $4.99 per issue cost. The per issue cost will be there even when the subscription model is integrated into the app so you are not forced to subscribe, you can stick with just single issues if you want.

Two other issues to be aware of are:

– Screen pops currently do not work on the Android edition, but they are hoping to have an update to address this issue in the coming months.
– There is a bug (which they will also address soon) that only allows you to use a tap event to open the navigation window which can make selecting links a little annoying (in the future it will require pushing on the screen for 2 seconds to bring up the menu as intended). 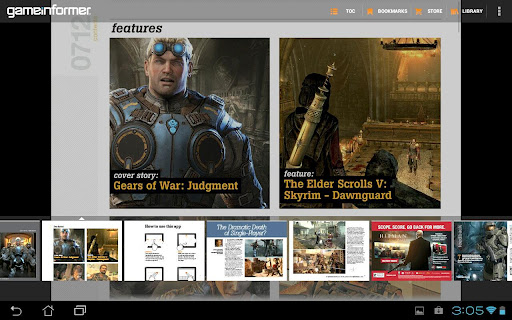 Even with all of the above points mentioned, the Game informer digital magazine looks promising with features such as:

– Embedded movies that you can watch anywhere, plus access to tons of movies online that you can watch from inside the app.
– Links to additional information online that can be viewed inside the app.
– Interactive screenshot galleries and information kiosks (our first issue features monster galleries for Gears of War, interactive E3 Bingo, and an armory for Darksider II’s Death).
– All the information of the print edition redesigned for ease of use on tablet.

Visually the publication looks great and each issue looks to be pretty interactive. The digital magazine will be a full featured digital version of their actual physical magazine, just formatted for use on 10″ Android tablets and more interactive. You can download the Game Informer digital magazine app off of the Google Play store for free.