There happens to be a shortage of tower building sim games on Android, and mobile in general, but there is a new one that has landed on Google Play called Droid Towers. Developed by the appropriately named Happy Droids LLC, Droid Towers is similar to other games of this genre such as Tiny Tower.

Even though it is fairly similar to other games like Tiny Tower, that is mostly in terms of the overall gameplay and goal behind the game. Visually Droid Towers has a bit more modern look to it with it’s 2D visual instead of the more retro look found in Tiny Tower and other similar games. Also the residents of your tower happen to be different colored Androids which is a nice touch. 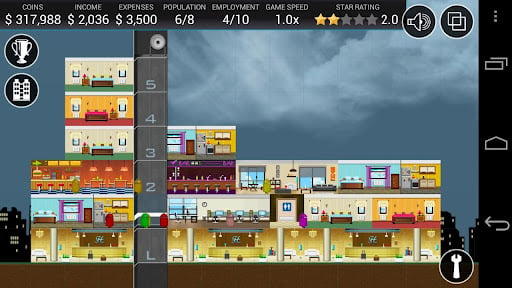 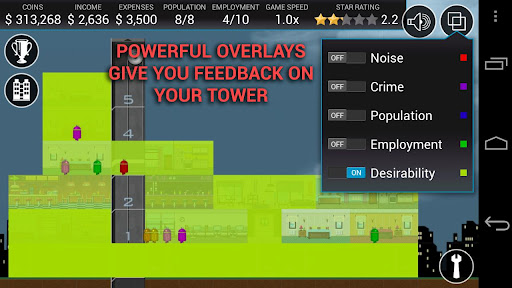 For those of you who haven’t jumped into the skyscraper building sim genre, essentially you will be building your tower in sections. As your tower grows, so does the population inside the tower. Of course you will need different sections that have different features and attractions in order to attract your residents in the first place. There is a bit of strategy involved because you can’t just plop layer after layer down randomly. You do get benefits by planning a bit as some sections benefit other ones if they are close to each other.

Overall this game is pretty solid as it is but with a little extra polish, Droid Towers could be quite the successful game. Either way it is fun to play. You can grab yourself a copy of Droid Towers off of the Google Play store for free and start playing right away. There are no in-game purchases or anything like that aside from the option to buy the unlimited version of the game. You can also play the game in your browser on your PC over at the developer’s website.