Asphalt 7: Heat Review – A Decent Arcade Racer, But We’ve Seen It All

Gameloft’s racing franchise Asphalt has been the mobile equivalent of Need for Speed for a few years now. It is widely regarded as the best arcade racing series available on smartphones and tablets. Launching on Android after almost a month of delay, how does the seventh iteration of this franchise fare? Read on to find out.

There are three game modes: career, quick race and multiplayer (online and local WiFi). In career mode, you play in a multitude of event types and earn cash and stars along the way. Cash is used to purchase better cars and upgrades, while stars are required to unlock more cars and championships. There are also goals to aim for, and upon completion you get a bonus star for each.

Asphalt 7: Heat is just like any other arcade racer in terms of gameplay in general. There’s the Nitro boost, drifts, traffic, knocking down your opponents and reckless street racing action. However, the one thing I find lacking in the gameplay is that the brakes are left fairly untouched. Cars go round 90- degree bends at more than 300 km/h without so much of a problem and this isn’t representative of the way things work in real life. 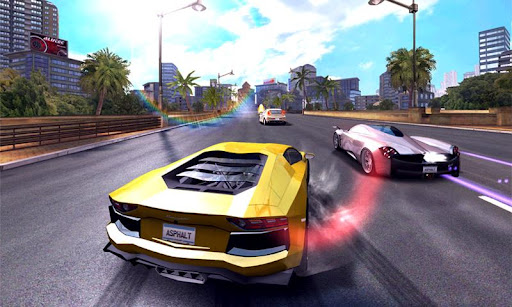 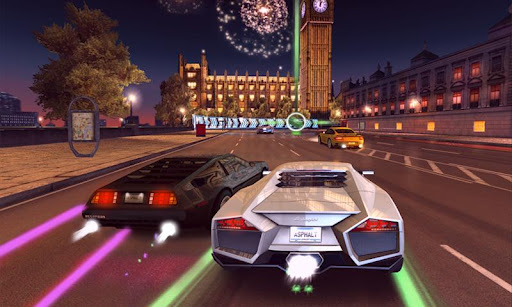 A game like this would be awesome to play against others (up to six people), but sadly the multiplayer is simply not fun as it’s played on a non-level field. While the races are broken down into tiers, this doesn’t help much since if you have the worst car in the tier, you will almost certainly lose. Also, since the races depend less on skill and more on the car’s top speed, there’s not much difference you can make.

Much has been made of regarding Asphalt 7: Heat’s graphics. I tell you what; the graphics are a major disappointment. The texture quality of the buildings and environment is terribly low- resolution. For a game sized at 1.4GB, this is unacceptable. The low-res graphics are most apparent during the pre-race cut-scenes, where close ups of the buildings are shown.

The game doesn’t really look realistic as well. There is a bright and glossy touch to the environment on the whole. Another problem with the graphics is that you can see the game rendering textures in the background while you race and this cheapens the gaming experience. On the whole, I must say a very shoddy job with regards to the game’s graphics by Gameloft, especially since they are known to excel in this area.

By default, Asphalt 7: Heat utilizes tilt-to-steer together with tapping the left side of the screen to brake and the right to use Nitro boost, and the car is set to auto-accelerate. There is another similar option, the difference being you have to manually accelerate using an on-screen pedal. I prefer this second setup since it gives me more control of my car’s acceleration.

For those who don’t fancy tilt-to-steer (and looking like a complete dumbass in public in the process), there is the option to either use an on-screen steering wheel or left/right buttons to steer. The only issue regarding the game’s controls is that on occasions, the car veers to the right of the screen for no obvious reason.

With a selling price of $0.99 for a game of supposedly AAA quality, it would be obvious that this game employs IAPs. The good news is that IAPs are really not necessary here. Everything can be earned in-game, and IAPs are merely a shortcut to success for the lazy. Anyway, you wouldn’t want to spend on the IAPs as they are ridiculously over-priced. For example, to purchase four stars (which you can otherwise earn through one race), the cost is $1.99.

Asphalt 7: Heat puts an emphasis on social sharing via Facebook. It’s fine if they do it once in a while, but this happens after every single race and is very annoying (the sponsored products before each race is equally annoying). The best solution I found is to link a secondary Facebook account and be done with it. Heck, you earn $5,000 in-game cash for sharing each time, and it’s not hard since you just have to top on a button.

Another thing is that the game has a poor UI. A lot of time is wasted just navigating around the interface. In a world where time is of the essence, this is simply bad. Additionally, unlike other racing games, the car stats (top speed, handling etc.) are not presented in a table format. Instead, they are displayed in a rotating text format. This makes stats comparison a headache, and thereby complicates the whole upgrade process.

For a game which promised so much, Asphalt 7: Heat delivers very little. The game doesn’t bring anything new to the table. It’s pretty much a case of ‘seen it, done it’. The graphics, which would otherwise have been a major selling point, is sub-par. Having said that, it’s a decently OK arcade racer and I see no harm done in purchasing it off Google Play especially since it only costs a buck.

Note: Game reviewed on an Acer Iconia Tab A510, which isn’t officially supported by Gameloft. After buying it I had to side-load it to make it work. Anyway, the game runs OK and all issues raised above affect officially supported devices. Interestingly, a lot of Play Store reviews mention the game lagging on supported devices such as the Nexus 7 and Galaxy SIII. I face no such issue on my tablet. I can only hope Gameloft adds my device to the supported list since it obviously works just fine.