Vector Unit are no strangers to the Android gaming world. They have had two hit games previously, namely the graphically-awesome Riptide GP and the moonshine-smuggling Shine Runner. Now, they’ve got a third game added to their arsenal, Beach Buggy Blitz. Racing a buggy on a beach (yes, they still haven’t completely left the water) sounds awesome, but how does it turn out actually?

Beach Buggy Blitz is not the normal kind of racing game where you go up against a few opponents for a certain number of laps. Instead, it’s classified as an endless-racer – think of it as an endless-runner on four wheels. You start off with 30 seconds and race against the clock. The moment you run out of time, the game’s over. Your goal, quite obviously, is to get as far in as you can.

There are checkpoints every few hundred metres that increase your spare time. Along the way, there are obstacles such as palm trees, giant crabs and large boulders that will slow your progress. Of course, the further in you progress, the harder things get. But the rewards increase as well. Coins are scattered along the trail, and these come in rows of ones at first, before increasing to twos and then threes later on.

For those who want to take this game a little more seriously, there are numerous objectives to aim for. There’s also a statistics page that tracks your progress in detail. The coins that are earned in-game can be spent on buying and upgrading vehicles, power ups, characters and gadgets (read: cheats).

In terms of the game’s visuals, I see a lot of parallels between Beach Buggy Blitz and Shine Runner. The cartoonish art-style is distinctly similar, and the environments are equally destructible (though you get penalised heavily here if you go crash-happy). And then of course there’s the signature water splash effect that Vector Unit should have patented by now.

That’s not to say the developers haven’t innovated, as there’s new additions like the dynamic headlights that kick in as you enter caves. The game’s environment procedurally changes as you get further in – it always starts off with the beach, but there are other areas like the swamp and volcano as well. It’s also worth noting that there is no one fixed trail. Instead, the trail is randomly stitched together each time you play.

Controls wise, Vector Unit has provided all the options available – there’s tilt-to-steer, two variations of on-screen touch controls and gamepad support. In that sense, they’ve got everyone covered and nobody is likely to be found whining that there’s no gamepad support for example. I personally prefer tilt-to-steer because it feels natural that way, unless I’m in public of course. The only other thing besides steering that you need to pay attention to is the brakes, which are located at the bottom of the screen. 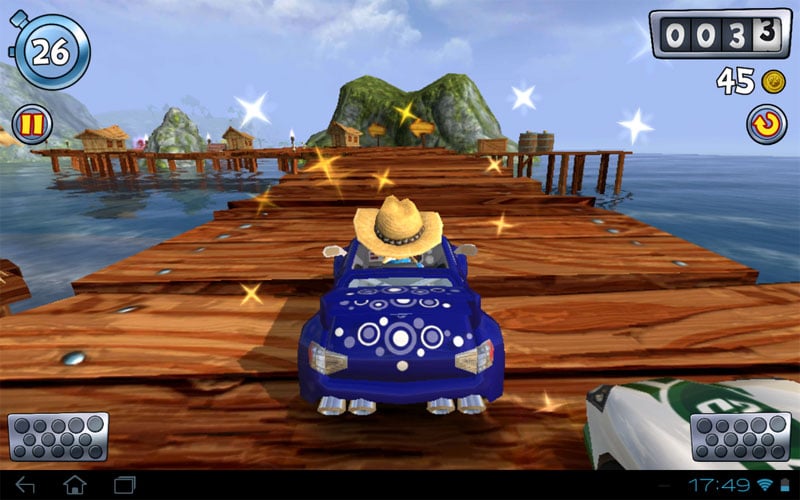 The developers have decided to test out the ‘freemium’ waters with Beach Buggy Blitz, and as such it contains IAPs to buy additional coins. Thankfully, the freemium model implemented here doesn’t turn me off –it’s neither intrusive nor necessary. You just have to play through the game like how you should and unlock stuff as you go. If you decide to dive in and splash some cash, you’d be happy to know that they’re not ridiculously priced (no $99 option, the max is $9.99).

Beach Buggy Blitz is a beautifully designed game. The graphics and game physics are spot on. The freemium doesn’t suck. The controls are impeccable. More importantly, it’s a casual game at its core that you can pick up and play at any time. Beating your previous high-score never gets old, and the fact that each time the trail is different adds some variety.

Having said all of that, I feel it would’ve been better to make this a light-hearted racing game a la Mario Kart, and have the ‘endless racer’ as an additional mode to increase replay value. After all, everything they needed to make that happen is already there in the game. Still, Beach Buggy Blitz is fun and addicting, and at the low price of free, there’s no reason not to try this on your Tegra device (other devices will be supported in about a month’s time).