Bad Piggies Review: Start thinking of ways to get the pigs to the eggs

Rovio, once known solely for their Angry Birds games which involved slinging birds into pigs (or in one case, cages), has now diversified its gaming portfolio. Their previous game, Amazing Alex, was a puzzler which required you to come up with crazy contraptions to solve simple tasks. Now, they’ve married the antagonists from the Angry Birds universe with the puzzling and contraption-heavy nature of Amazing Alex to come up with Bad Piggies.

The gameplay builds on a lot from Amazing Alex, where basically you are given a set of tools to reach the end-point. In this case, the tools at your disposal are used to create a vehicle to take the green pigs to their destination. What are the pigs after? Bird eggs. There are a variety of objects available (33 in all) at your disposal to build the perfect vehicle – among others, there are fan propellers, balloons, boosters and wheels. You’d need to assemble these objects in a grid before setting your creation in motion.

In classic Rovio fashion, there are 3 stars to be earned in every level. You get one star for reaching the end, and another two more for completing certain objectives like finishing under 5 seconds or completing a level without using a wheel. Rovio has also reinvented the wheel here slightly – all 3 stars don’t need to be earned in one play. In any case, getting 3 stars in one go is usually not possible due to the nature of the objectives. 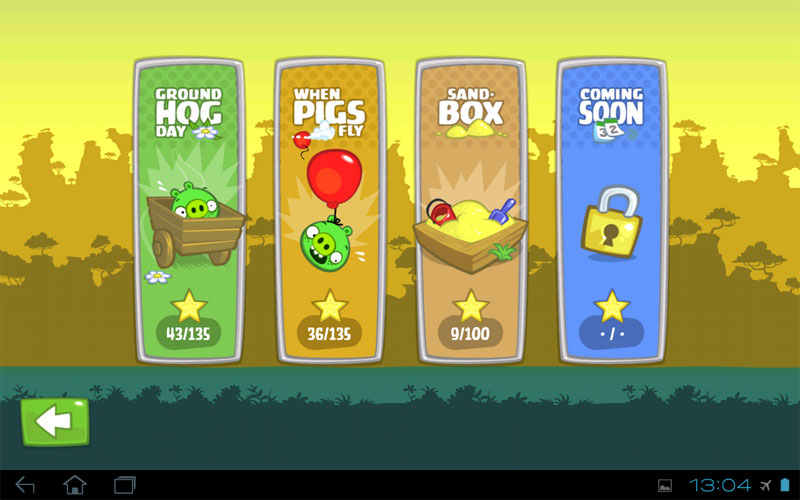 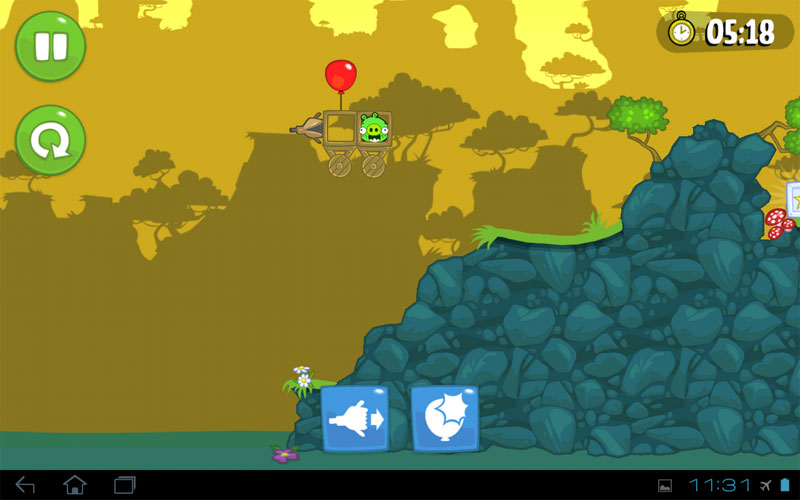 Let me warn gamers looking for something casual and easy beforehand though – Bad Piggies is no easy game. It involves a lot of physics concepts like gravity, weight, acceleration and load distribution. And even if you think you know these concepts, there is a lot of trial and error (read: frustration) involved, especially after getting beyond the initial levels. You’d also have to think out of the box – conventional designs might not work at times. Instead, simply blasting a TNT explosive beside the pig might get it to the finishing point.

The load distribution is my favorite element of the game – placing the pig at the front, middle or back for example can yield starkly different results. With the number of tools available, figuring out how they work exactly may be a stretch, so there’s is a manual book with diagrams and sketching that can help you out. If you still find the going to be tough, you can splash some cash and buy ‘mechanics’ that will design for you the best vehicle to get through the level. 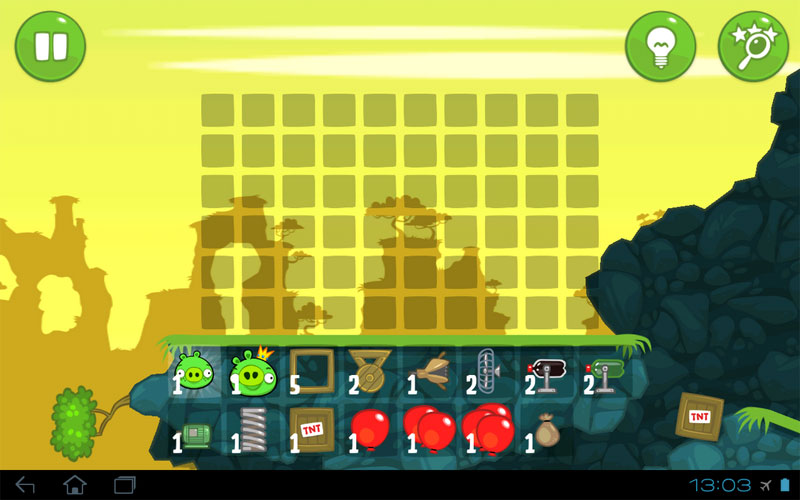 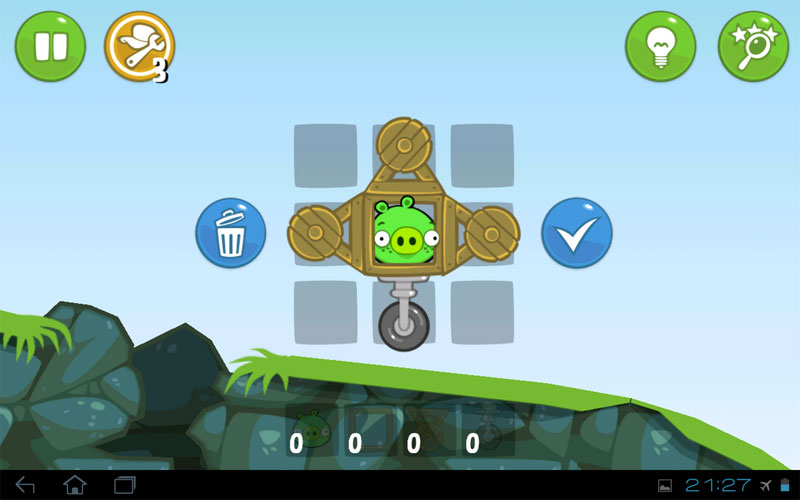 One of the game’s flaws is that unlike Amazing Alex, repeating one arrangement many times will yield you many different results. In Amazing Alex, repeating the same arrangement infinite times will yield the exact same result. This shows that the game’s physics engine is not set in stone. While this ultimately doesn’t affect the gameplay much, it throws in an unnecessary element of luck to the game.

Bad Piggies’ graphics lends a lot from the Angry Birds universe. Of course, the pigs are there, but the art style, color schemes are all similar – people who’ve played any Angry Birds game will instantly resonate with them. The game’s soundtrack is cheery and slightly on the kiddy side of things. Don’t let the childish nature of the game’s graphics and sound fool you though, because as mentioned above Bad Piggies is anything but a children’s game. Most adults will struggle with it. Heck, I’m also struggling at it. 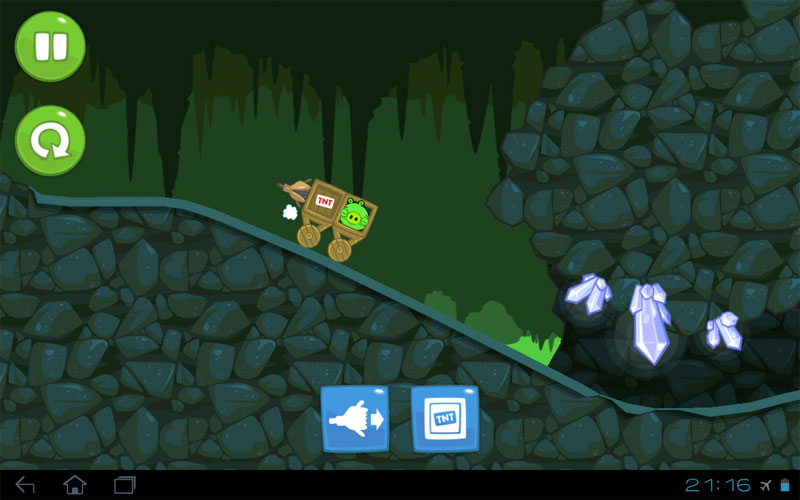 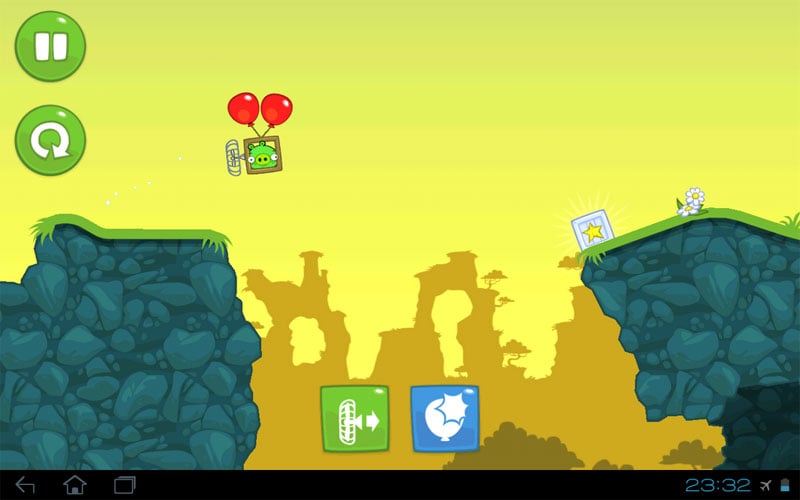 Content wise, there is a lot for those who persevere. The game’s primary mode is divided into two sections – one focusing on building ground vehicles and another focusing on creating flying machines. Then there’s a sandbox mode which affords you a lot room to test out your skills. The sandbox world is much larger and the selection of objects is greater too. There is one special sandbox mode which you can unlock if you’re good enough to get the 10 skulls hidden throughout the game.

Bad Piggies is much more fun as compared to Amazing Alex since you’re given more freedom to work with your designs and the gameplay is more dynamic. But at the same time, it is also more difficult. If anything, it is this difficulty that will ultimately put off gamers. Sure, things stay fairly simple at the beginning, but the latter stages require lots of serious thinking and tweaking.

Those who like building stuff, testing their creativity and have an interest in the subject of physics will probably come to like the game, but for everyone else the game gets difficult or frustrating enough that you’d just lose interest and not bother playing it anymore. If you’re on the fence not knowing which side you’re on, just download the game off Google Play. You’ve got nothing to lose after all as it is free (ad-supported of course).