At some point, you’ve probably dreamed of living the life of a subway-surfing, graffiti-spraying, boombox-toting, hoverboard riding kid. Living life on the edge and running from the law. Jumping over trains is your 9-to-5. Every day, 24/7, making your living off of coins you find laying all over the railways. It’s a pretty humble lifestyle, but because because you’re the definition of “Cool”, you can handle it, right? Who are you kidding, of course you can. You’re no match for that cop and his dog. Why? Because you’re a Subway Surfer. Okay, that’s kind of a grittier take on the super-colorful, hyper-stylized world of Subway Surfers, but if you’ve ever fantasized about subway-surfing, this game is for you. And if you haven’t guessed the title by now, the game I’m talking about is Subway Surfers.

Developed by Kiloo and Sybo games and released for Android and iOS in 2012. Subway Surfers is a 3rd person endless runner – not unlike Temple Run. But unlike a lot of the Temple Run “Clones”  out there, Subway Surfers uses a slightly different and more addictive approach to the 3rd-person endless runner. You see, Subway Surfers uses an incentive-based mission system for progression. There’s a Daily Challenge for you to complete, which has you finding and collecting letters that spell that day’s word, there are missions where you have to collect…say, 500 coins (The number varies) or even missions that have you aiming to collect 1000 coins in a single run. Also, there are a few power-ups to collect to help you avoid trains, like a Jetpack or Super Sneakers. Those elements mixed with a highly addictive gameplay style make for a very engrossing (and time consuming) game. 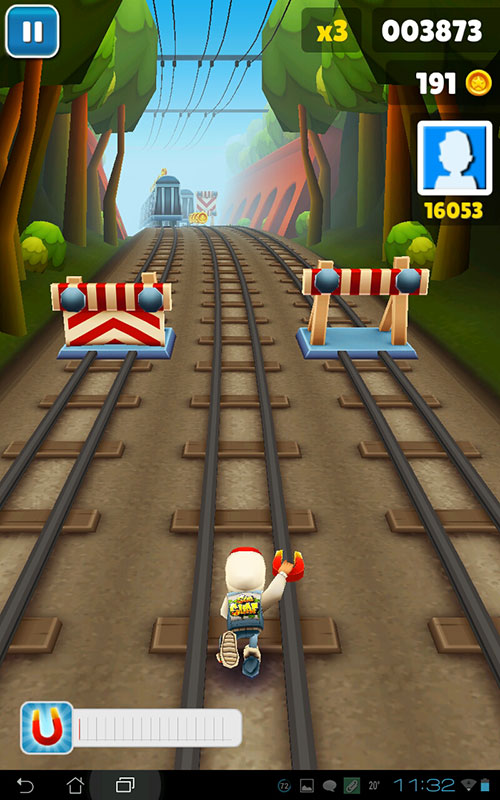 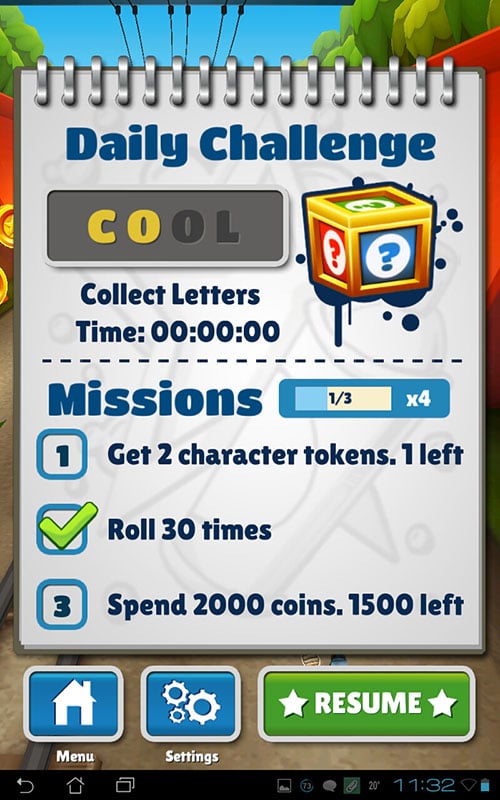 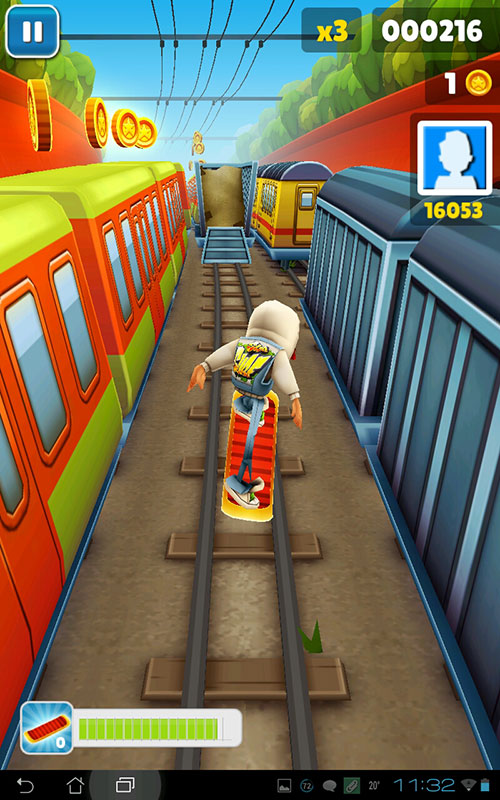 At the beginning of Subway Surfers, you have one character: Jake – from the behind-the-back, 3rd-person perspective. You control Jake using a few gestures. Swiping left-to-right controls which lane you jump between, swiping upward makes Jake jump, a downward swipe makes Jake do a tumble roll – to slide under objects, and there’s the double-tap, which allows Jake to use his hoverboard – which makes him invincible for a short period of time. If you swipe into a train or a wall, the policeman and his dog will get closer to you and if you make a bad swipe from there, it’s all over. He catches you and you’re sent back to your starting position. This may sound aggravating on paper, but in practice it’s actually a nice touch to be able to make a mistake before being caught. Or getting hit by a train, your choice.

Like I said earlier, Subway Surfers is a very, very colorful game. The trees are green, the sky is blue and the trains color scheme consists mostly of yellow and red. The game looks like a cartoon in the best way. And like a cartoon, there is a large cast of 10 characters – each unlocked in a different way. The first few you can unlock using coins, but the last 3 characters you unlock using items from the mystery boxes that you pick up on the tracks. I have probably spent…I don’t know the literal amount, but it’s almost certainly more time that I should have trying to unlock some of these characters. Hours upon hours grinding the railways for coins at mystery boxes, just for the chance at finding that third red beanie to unlock a certain character. Like gambling, it’s a really addicting system, but with this game using an IAP model, it could be a problem for some.

More on the IAP, there is an in-game store where you can buy items and power-ups to help you – using your hard earned coins, or you could straight up buy them through the Google Play store. There are three amounts of coins you can buy with real money, 7500 coins for 99c, 45000 coins for 4.99 and 180000 coins for 19.99. I did try to buy coins through the Play store, but they actually arrived, so I say you should probably avoid purchasing coins (I made that mistake twice). Using your in-game coins you can buy, a two levels of head starts – the more expensive one allows you to have a greater head start and a pass to skip the 1st mission. You can also upgrade your Jetpack, Super Sneakers, Coin Magnet and the 2X multiplier. It’s a feature that ends up being more useful than you think.

Like most other score-driven games, Subway Surfers also includes a few social features like Facebook integration, which allows you to brag to your friends, receive free coins and use a leaderboard. There are also a few trophies for you to collect, which provides a fun distraction. I don’t have much to say about the music in Subway Surfers. It’s fun for a little, but after a while it grates on your nerves with the same looping music.

All-in-all, Subway Surfers stands out because it takes a very popular and established formula and iterates on it in a few important ways. The mission system is varied enough to provide you with a reason to keep coming back to the game, the characters are fun, quirky and charming and the additions that Kiloo and Sybo have added to the gameplay, really make it something special and it is definitely a game that deserves a spot in your games folder (or however else you organize your games/apps)