While October 29th is only five days away, which is when Google will be having an event in New York which everyone is pretty much guess will be the official announcement of the Nexus 4 device, probably something to do with Android 4.2 and even possibly the Nexus 10 tablet. One thing is for certain, something with a Nexus will be involved.

Since we pretty much know all the specs about the upcoming LG Nexus 4 which we are pretty sure will be officially announced on October 29th, 2012, we might as well take a look at what the final design will most likely be for this new Nexus device. To recap, incase you missed the specs for the Nexus 4, it will be sporting a quad-core 1.5 GHz Qualcomm APQ8064 Snapdragon processor, a 4.7-inch running at 1280 x 768 resolution, 2GB RAM, 16GB storage, an 8-megapixel rear-facing camera along with a 1.3-megapixel front-facing camera, and finally a 2100mAh battery. 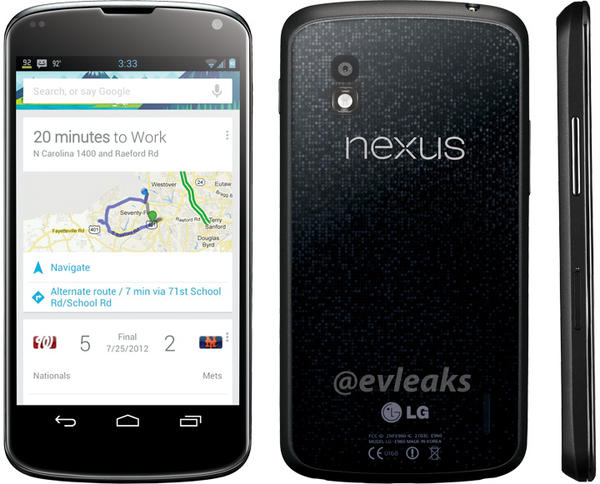 The new render, as seen above, come courtesy of @evleaks once again which seem to be doing quite well when it comes to dishing out information regarding this new Nexus device. So, now for the question of the day, are you going to be picking up one of these LF Nexus 4 devices when they become available in a few days?