Death Dome, by Glu Mobile, is not really anything surprising. We’ve seen this same cycle play out before in all sorts of genres. One or two titles come out and create a demand for a certain style and we get to witness a parade of clones, games that attempt to not only copy the original success of those earlier titles but that often add nothing to the genre. Many gamers buy these copycat titles and relish in what is essentially more of the same thing, feeding the parade. It’s not that I mind players or developers who enjoy copycats and repeated mechanics. As long as everyone is having fun then all is good. The problem comes in when we have a harder time finding original content thanks to games like Death Dome taking up space on virtual shelf of the Play store.

Death Dome is set in some sort of post apocalyptic world, an endless Hellscape that is populated by massive, brutish zombie-like ghouls and creeps. We are cast in the roll of a unrealistically-clad female warrior who must fight her way throu….ZZzzzzZZZ. Oops, sorry… it put me to sleep even when writing about it.

How do we fight these massive baddies and hulking monsters? Well, if you’ve played Infinity Blade on iOS or any other game that uses the same technique for fighting, you’ve played Death Dome. There’s nothing wrong with the combat mechanic; it mostly works well on a handheld device except when it demands the same dexterity as a desktop game, but it’s just a mechanic and no game should be based solely around that mechanic anymore. 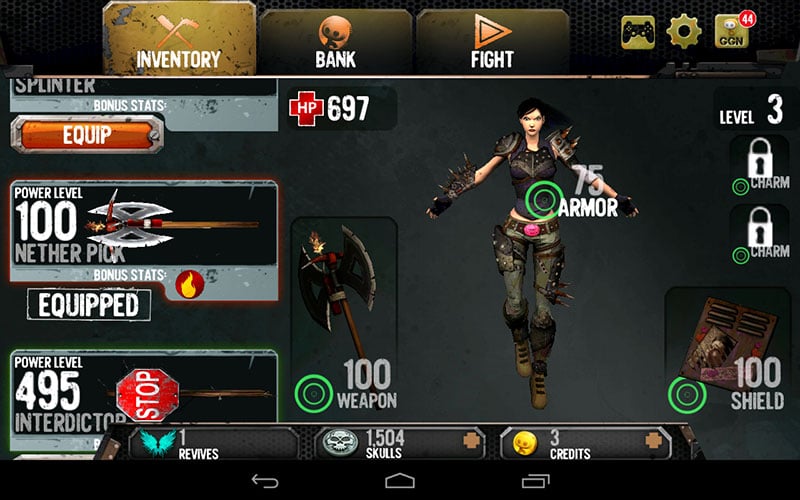 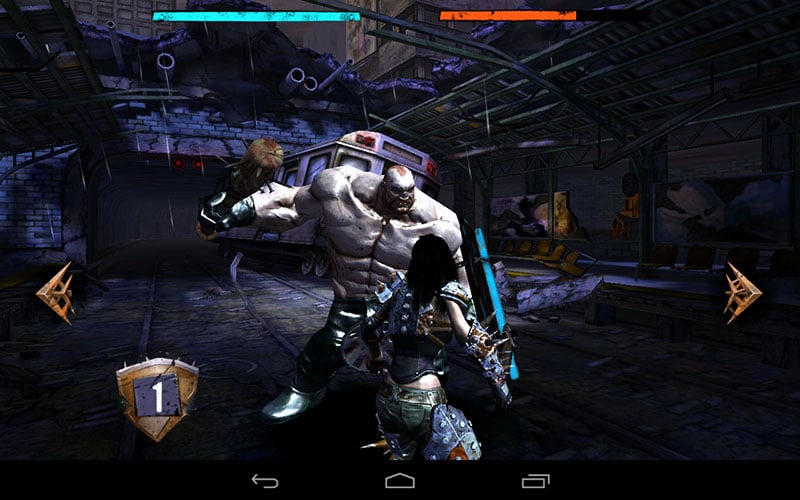 I joined my first few fights and immediately knew that the game would be something I’d quickly forget. It looks great in many ways, but the characters and art design have been used in some way so many times before the game just blends into my memory. The combat was fresh back then, but now it feels more like playing a game made for a young child, an advanced game of whack-a-mole. Here comes the hit… DODGE NOW! Here comes a headbutt… BLOCK NOW! Want some variety in your gameplay? Great, there’s a scavenging mini-game! But wait, it’s basically tapping on the screen several times and the rewards are basically tiny.

Look, we’re going to see more bad games than good ones. This should not be surprising for Android gamers. The good news is that these silly titles do not place much demand on our pocketbook. And, as much as I would love to tell you to skip this one, I still say grab it and see for yourself… we’re not talking about a 60 dollar box. But, if you don’t like it, feel free to fill out a review that says so. Make it constructive, but it’s the least you can do.

Having said all of that, if you like action games that require sometimes split-second timing and that look pretty fantastic (especially on the newer devices) than go for Death Dome. The combat is interesting in the way it ties directly into a player’s reaction time and the way enemies give sometimes subtle clues as to what they are going to do next, but it’s only interesting if you’ve never really seen it before. The early levels can be a bit too challenging, as well, and there is no real smooth curve of challenge.

I burned my way through the first few enemies only to hit a brick wall. Oh, I could have played the more challenging level over and over until I beat it, but most of the time I just set my Google Nexus 7 down and walked away. I like a challenge, but not one that comes from an otherwise unoriginal, boring game. This new swath of killer-looking games is great for the mobile market, but only if we get better games out of it. The action-based combat of Death Dome was once innovative and exciting but now should only be used as part of a larger, more original concept. Death Dome feels small and too familiar to be fun.