Ok, so the zombies are taking over a post-apocalyptic world, and for some reason the army has chosen you to do certain small-level tasks while they fight with the zombies on the main battlefront. This is the premise for the story mode of the game, where you are given mission briefings by the army to do things like rescue survivors, take down zombie bosses and clear out an area of zombies.

The way you go about killing the zombies is obviously the lure of this game. Take the vehicle that you have and mow down the zombies, like a grass-cutter cutting grass. To add to mindless zombie slaying action by ramming into them, you get to have a wide-array of weapons like machine guns, flamethrowers and bombs. Even the types of vehicles at your disposal are great – a limo, firetruck and army tank. And there’s nitro boost added in for good measure as well. 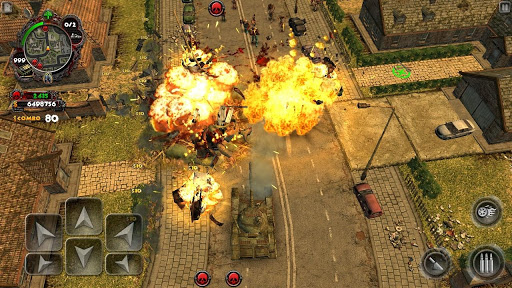 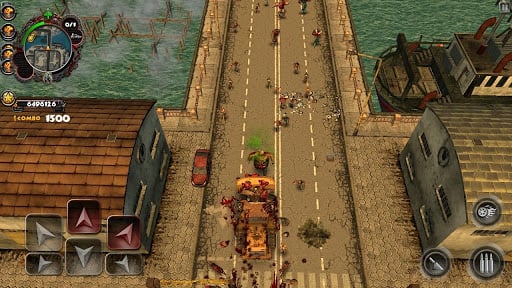 Aside from the story-driven primary game mode that has voice-acting for the mission briefings and some simple cutscenes, there are two other modes – Blood Race and Slaughter. These modes add a lot more value to the core game. Blood Race essentially has you playing in tournaments made up of three disciplines – race, endurance and elimination. Slaughter on the other hand allows you to mow down zombies like there’s no tomorrow. You can continue playing until the zombies have fully destroyed your car.

By now it’s apparent the game has a lot to offer, content wise. But well, the means to enjoy all these content – the controls that is – are poorly implemented. And by poorly, I mean very. There are two different on-screen control mechanisms – one of which has a virtual d-pad and the other buttons – to steer and accelerate the car. Yes, you read that correctly – the developers have combined steering with accelerating the car, and the result is awful.

The whole system is unnecessarily complicated. And whatever joy one could have obtained by playing the game is undone by the fact that no matter what, you’d end up crashing into walls or barrier every other second. And this is beyond frustrating. The only consolation here is that alternative controls (keyboard and gamepad) are offered. 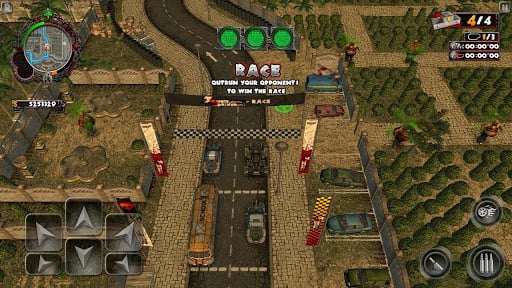 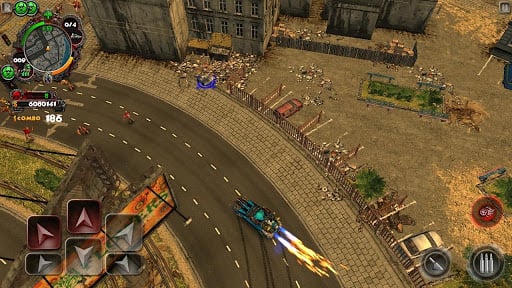 You will be able to notice a huge difference in the ability to take control of the vehicles the moment you pair a gamepad. I’m never one who connects my gamepad to my tablet to play games, simply because I believe touchscreen games are meant to be, well, played by touching the screen. It’s almost as if the developers were playing this game all the way through with physical controllers and didn’t give any thought to the virtual ones

Still, even with a physical controller, things aren’t perfect. For one, the cars’ motions are very stiff while cornering. Also, the car reacts to the controller input in a jerky manner. I believe the developers have to come up with a better solution for on-screen controls. Maybe play around with tilt motion, and set the cars to auto-accelerate.

Zombie Driver THD’s graphics are solid, though not mind-blowing or anything of that sort. There is a fair amount of destructible objects in the environment. For zombie blood lovers, you’ll be happy to know there’s a fair amount of blood splatter present here. My one problem is that the graphics are a little on the dull side of things, and on a personal level, I don’t dig the top-down view that the game has. The sound effects and soundtrack are not particularly outstanding either, but they get the job done here nevertheless.

It might be worth getting Zombie Driver THD if you like the premise of the game AND if you have a physical controller available. Otherwise, just forget about it. The experience with and without a controller is nights and days apart. My sincere advice to you if you plan on playing this using the touchscreen controls is to stay away until the developers can provide a more touch-friendly control interface.