Action Adventure game Bloom hits up Kickstarter, will be for OUYA when the console arrives

A new Action Adventure game has hit up Kickstarter in the hopes of getting funding to help get completed. Developed by Studio Fawn, Bloom is  great looking Unity3D built action adventure game with RPG elements layered onto it for a little extra depth. Currently Bloom is slated for release on PC, Mac and Xbox but when OUYA arrives it will be made available for that console as well since it is being made with Unity3D which allows the developers to launch the game on multiple platforms with very little effort or change.

So what is Bloom? Well Bloom is an action adventure game with an isometric viewpoint and RPG mechanics layered over it such as levels up your character and gaining new skills as you progress through the game. This is a fantasy themed game where the forces of nature are battling it out with the forces of the re-emerging technology of the past. You’ll be playing as a survivor who is trying to survive and who’s people are innately connected with nature and its power. The developers have made a pretty unique ability system that allows one action to do multiple tasks depending on the situation. For example, shooting an arrow at an enemy will cause damage to that enemy but in a different situation, shooting that arrow could perform a different action such as delivering a message over a long distance. 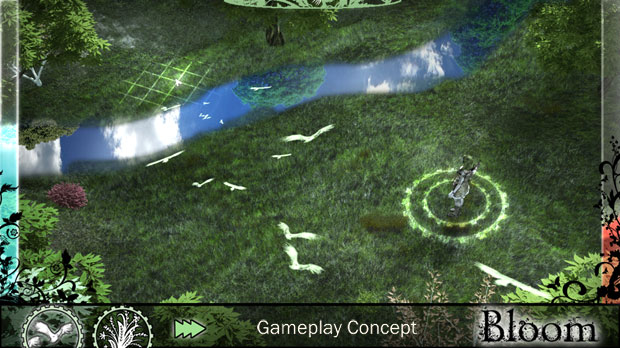 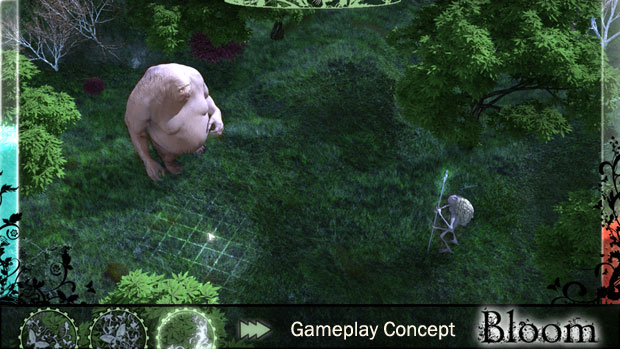 This was done so players could have a lot of choices and strategies available to them while not overwhelming them with huge menus listing various tasks they could perform with a single action. Basically making the game very deep in possibilities without making it overly complicated. Combat is done in real-time and is very strategy focused. It isn’t so much about mashing a button to beat an enemy but figuring out creative ways to beat them. If your weapon is a bow and arrow, how do you defeat a creature that can’t be hurt by arrows? Scenarios like that will happen and the game is meant to challenge you to figure out the solution while not dieing. Enemies will also adjust their tactics as the game progresses so you’ll have to keep figuring out new plans of attack.

Since you’re nature-based, the environment also holds bonuses and special powers for you to utilize as well as advantages in combat. For an action adventure game, Bloom is very strategic and almost sounds like an RTS game even though it isn’t. Visually the game looks pretty solid from the preliminary screenshots released so far. It definitely looks like it takes some inspiration from previous isometric action adventure games such as the Diablo series.

For those of you interested in helping get this game to OUYA, or any other platform you might play it on, head over to their Kickstarter page and drop a couple of bucks to help out. As for Android phones or tablets, right now it seems like this game will be strictly console and PC based, so OUYA is the only Android device slated for Bloom to be released on. However, since it is being developed on Unity3D, there is always the chance we could see a mobile version arrive for Android. If that happens it would most likely be for tablets only we are guessing.