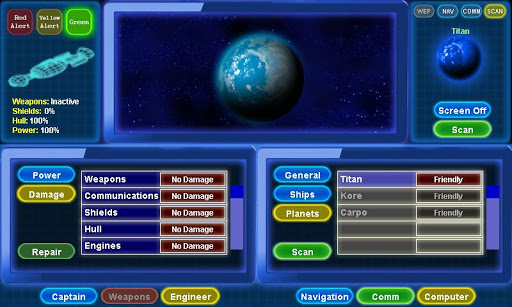 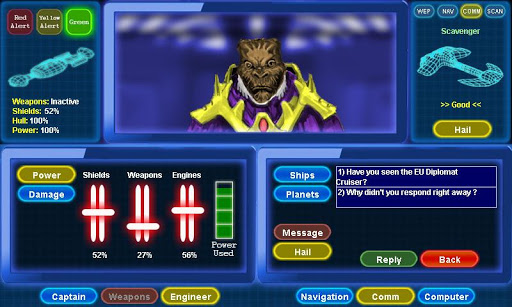 This particular space sim game is more of a menu drive title but not in the style of games such as Mafia Wars. By menu driven we mean more screen/monitor based then actually moving around little pixel people on your ship, similar to games like Uplink. However, everything is animated and not simply a drop-down menu, giving Bridge Captain more of a point-and-click adventure game feel to it.

As the story goes, you are the captain of a Earth United Space Vessel and your mission is to search unregulated space for a ship that has gone missing. In your journey to find the mission ship, you will have to make choices on how you go about handling each situation that arises while looking for said ship, whether it is to fight, bribe, barter or interrogate your way around the system. Your piloting system lets you handle all the functions of your ship from controlling it to weapons, navigation, engineering, and scanning.

Bridge Captain was actually created for Ludum Dare, the indie game development contest that challenges indie devs to make a full game in 30 days. This means as of right now, the content is a bit sparse and getting through the game won’t take too long. However, the developer is gearing up to release a new update that will bring more content to the game. If you’re up for it, you can give it a whirl by downloading the game off of Google Play for $1.00. One thing to note, even though this game is available for phones, it was designed with tablets in mind.

Thanks to Alexander B. for the tip!