There are not many extreme sports games in the Play store that can even get close to what you can get on the consoles. Mike V Skateboard Party tries to correct that with a game that boast impressive graphics, simple touch controls and 4 reasonably sized levels to explore. So lets get on with this review.

When you first start you get the usual options, Career, Free skate and Skate shop. So lets start with the career mode. Well you get 2 minutes to skate around trying to complete ‘achievements’. These range from high scores to finding hidden items to combo targets. This is again nothing new. You get 5 achievements which you have to complete on each level, which can all be done on your first try once you get used to the controls. to complete career mode it takes around an hour, which is short for any game but for a paid game its even worse. 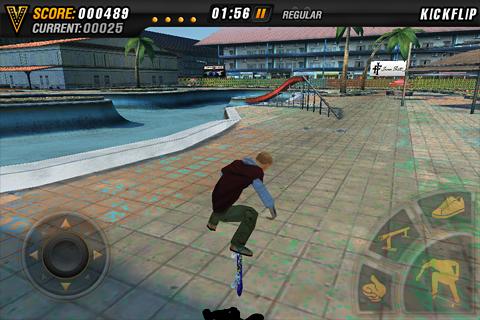 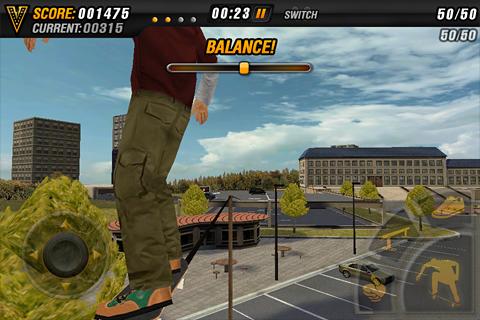 Free skate is the usual pick a skatepark and skate around in it. I have to admit doing this has eaten up more than a few hours, but again i was hoping for a little more. This may be the most unoriginal game (thats not made by Gameloft) I have played on Android.

The Shop is where the IAPs rear their ugly head with 2 extra skateparks which you have to buy to play. I understand that developers need support to improve their games but when you are only given 4 skateparks originally, it seems a little cheeky asking for more money to unlock the additional ones.

The controls work well on a tablet, but on a phone it can get difficult as the buttons are very close together and mid combo you may find yourself hitting the flip trick button instead of the grind one effectively ending your combo with a face plant.

Although unoriginal, many will get some fun from this game, but almost a year on from original release, its still only got 4 unlockable skateparks, annoying IAPs and a control scheme that will frustrate. Half decent graphics don’t save this game.