Future Shooter is a futuristic 2D side-scrolling Beat-em up from Dancing Cat Development and released for Android in 2012. The game takes place in 2842 and you play the role of main enforcer for your gang. Your gang’s operations are being disrupted by the other gangs, and as main enforcer, you take charge of the situation. Future Shooter is your standard side-scrolling street brawler, but this time it’s set in the future. In the game, you have four classes to choose from: Punk, Ninja, Cyborg, and Soldier – one from each gang. All of these classes look different, but essentially play the same.

All classes start with the same three basic weapon types: A knife, a pistol, and an automatic weapon – you can purchase more as you progress through the campaign. The pistol and the machine gun have limited ammo and enemies drop extra ammunition, so you’ll have to play wisely. 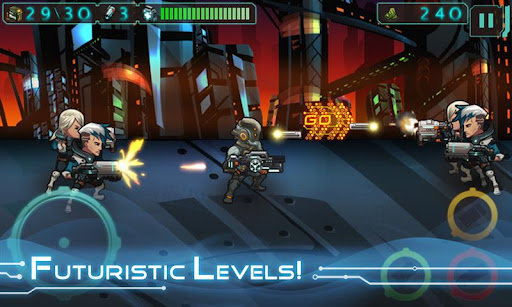 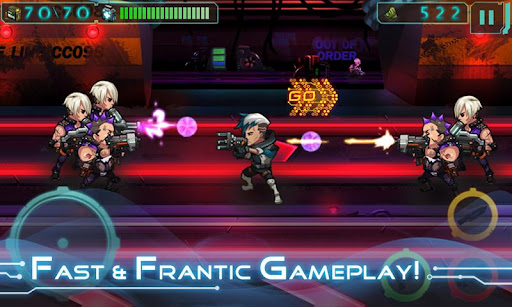 Each character’s artwork is well done and distinctive. The visuals are sharp and fluid – but they don’t scale well to a larger screen. The controls are Xperia Play optimized, and the audio sounds great. The music is has a mysterious, futuristic tone to it that compliments the game nicely. Each weapon has distinguishes itself from another with very satisfying sounds. The pistol is faster and sounds smaller, while the automatic weapons are heavier and sound satisfying.

The gameplay has three levels of difficulty, and the stages take place on a two dimensional field. You move in all directions, killing enemies, shooting down sentries, and avoiding mines and moving right to reach the end of the stage. Each stage’s enemies and weapons are randomly generated – meaning no two levels are alike. The game’s stages take a longer than they should to complete – or at least felt that way. There isn’t much in the way of variety. While the game’s art is pretty, the stage’s designs are relatively dull and lifeless, and because you only fight one of each gang (or enemy type) per stage – each gang sharing one character model, it can get pretty monotonous and it ends up feeling like a grind.

Future Shooter is not a bad game per se, but the stages’ designs are dull and drag on longer than they should for a mobile game. The sound is great and the visuals look even better, though. At $0.99, Future Shooter’s price lends itself well to an impulse purchase, but be wary, your mileage with the game will be limited.