Lost Souls Review: A familiar trip through a beautiful landscape

Let’s be honest, OK? If you’ve played one of these casual, hidden-item, Big Fish-style games you’ve really played them all. Well, sort of. While I’ve become very good at pointing out how many titles repeat the same designs over and over, and how this repetition has begun to wear even my battle-hardened gamer senses down, I still keep in mind that some genres will always be what they are… that’s what makes them genres. Sci-fi will probably always have spaceships and robots, Westerns will have cowboys on horseback and fantasy will keep it up with swords, dragons or orcs. It’s just how it is a lot of the time.

Lost Souls comes from the casual adventure genre. Within you will find games that take you through a story a little bit at a time, asking you to solve puzzles and crack mysteries. It’s generally easy stuff although most of the titles have a “hard” mode that doesn’t hand out hints as often. I’ve noticed that the fun behind the hidden-object/soft adventure genre is not in the challenge level, but in the details of the stories and the wonders of what I assume to be hand-painted (probably by an outsourced artist in some little known country) artwork. The journey is truly the treasure in this genre. When I play one of these type of games, I do so to relax, not to get wound up in glorious, bloody action.

Lost Souls starts off by quickly explaining how your child has been sucked away, deep into some mysterious land of paintings by an evil necromancer type. It’s a story we’ve seen elements of before, a clever tale that makes segmented gameplay believable. After all, the painting of your child (which represents his capture) must be rejoined in order to get the child back. The individuals pieces of the painting were spread out into other paintings and you, of course, need to journey into the individual paintings in the hopes of solving casual puzzles to gain another piece of your child. I haven’t finished the game yet but I assume they will all come together in the end. I’ve yet to play an adventure game that ended with a dead child. 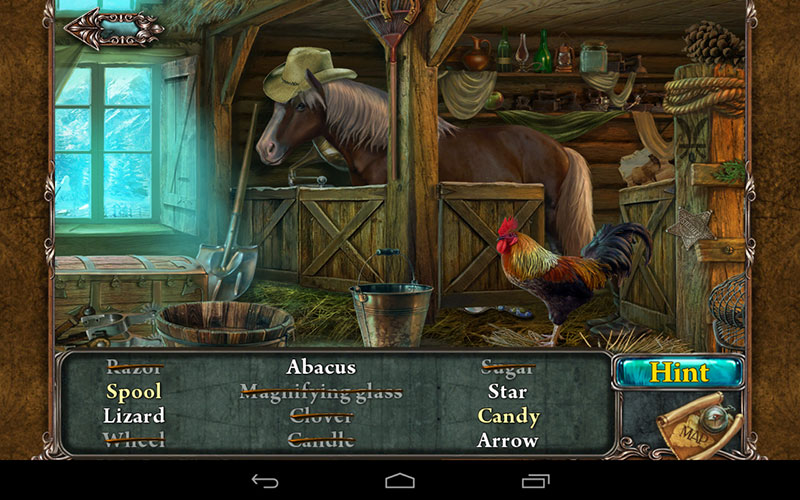 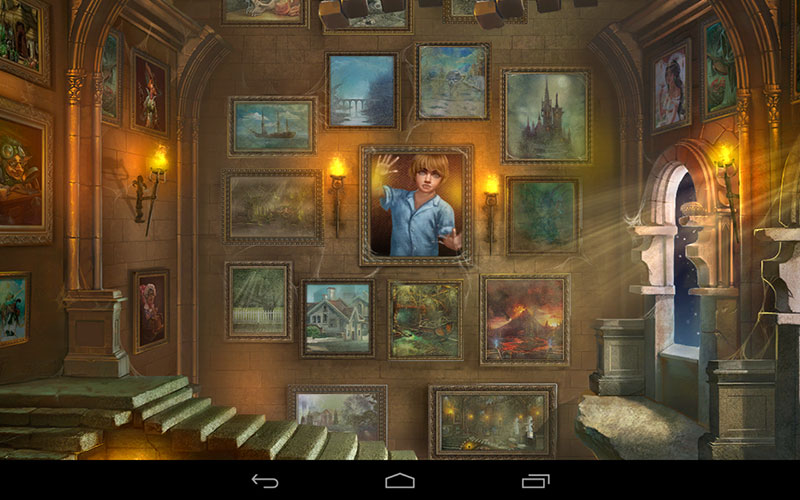 The puzzles can sometimes provide a bit of a challenge, but more often than not a player who has played even one or two of these type of games before will recognize the patterns. You grab an item in one scene and it seems to have no use, so you know that holding onto it will help you solve a puzzle later. If you run into what seems like a dead-end, you know that soon enough you will find the missing piece. There’s no real suspense in most of the light-adventure games I have played, but I’m not sure they’re really meant to be suspenseful. Instead they are taking us into a easy-to-follow fairy tale, a more linear choose-your-own adventure book. You do remember those books, right?

A lot of the fun from a game like Lost Souls is found in the interaction between you and the device you’re playing on. An Android tablet or phone is used in almost every way when playing a game like Lost Souls. You’ll swipe, brush, touch, poke, break and drag-and-drop to solve puzzles. It will all take on a very organic feel because you are actually physically interacting with the game instead of just pressing a few buttons to issue commands or swiping occasionally to cast a spell. Adventure games have probably been one of the best genres for the mobile market, thanks to this needed interaction that shows off a touchscreen’s capabilities.

It’s hard to review a game like Lost Souls without giving away story spoilers, but even if I did tell you exactly what happened you probably would not be surprised. As I mentioned, the story is really not as important as how the game flows, the quality of the artwork and music and if the game provides enough twists on this very popular genre to make it more fun than familiar. Unfortunately, I haven’t seen much in Lost Souls that makes it stick out from the pack. There are a few simple puzzles that I haven’t seen before but generally it’s a game of same old gameplay. Fortunately it’s relaxing gameplay and can be enjoyed in chunks. Play a little while sitting in bed at night, work through a puzzle or two while you eat breakfast… Lost Souls won’t mind. The characters are pretty forgettable but everything is done well enough to enjoy.

So, should you pick up Lost Souls? Sure, if you enjoy light adventure and casual puzzle-based gameplay. I can say the same for literally scores of other titles, though, and can easily recommend others that actually innovate more within the genre. Still, Lost Souls is free to download and you get a lot of gameplay for the price. Just be aware that it does move fast and you might burn through the game in no time.