Superbrothers: Swords and Sworcery EP Review – An otherworldly experience but a frustrating game

Let me get this off my chest first – I am no fan of 8-bit, pixel art games. As such, I ignored Superbrothers: Swords & Sworcery EP when it got released on the iPad over a year and a half ago. I still ignored it when it came out on the Humble Bundle for Android 4 recently. However, once it got a proper release on Google Play, I decided to finally take up the game, see what all the hype is about and then do a review. So, here I am now. How did I find the game?

Sworcery is a weird game, simply put. Not just weird in fact, but eerie, otherworldly and the likes of it all at the same time. It is classified as a point and click adventure game, but it really isn’t a point and click adventure game outright. There is no incessant clicking here and there. The clicking is minimum, and in fact you can control the character’s movement by merely tapping and holding in the desired direction on the screen.

In Sworcery, you play as a girl who’s on a “woeful errand”. She’s equipped with a sword to fight battles and sworcery to solve the mysteries of the land. Eventually, she must return the Megatome to the top of a mountain to put evil to rest for once and for all. All the quests you go on in the game is geared towards that one goal. There are a few other characters in the game that will help you out (albeit very vaguely) in your quest. 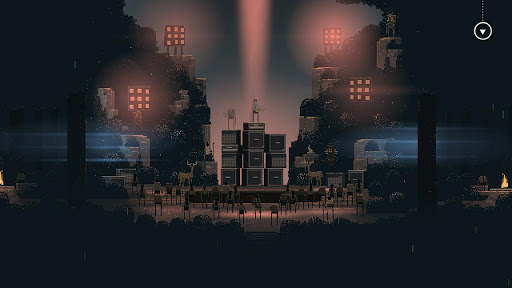 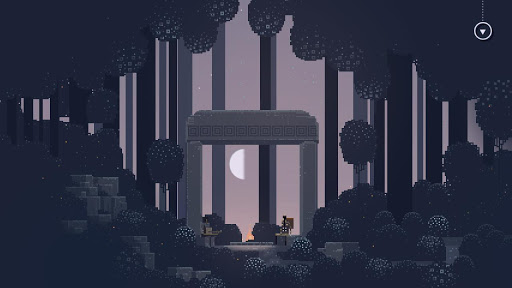 So remember I said I dislike pixel art above? Guess what – I actually liked it in this game! The pixel art doesn’t seem like a limitation, but instead it allows you to imagine more of the world. I especially liked the reflection on the water that can be found in a few different locations in the game.

Now, what really defines this game is its soundtrack. To be honest, Sworcery would be quite the dud without the soundtrack. A sublime blend of meditative, psychedelic, soothing and mellow tunes is what allows it to provide players with an otherworldly experience. At times, when the gameplay was a letdown, you’d still want to stay on the game just to listen to the soundtrack.

Ok, so we know Sworcery delivers on every level as promised in the audio-visual department, but what about the actual gameplay itself? I tell you what, this is where the game falls short of eternal greatness. It starts of fairly well. I like how you aren’t given a tutorial, and instead have to figure out things from the very beginning. As vague it may be, you are encouraged to explore. And it felt good to see what you had in mind was actually the correct way to move forward.

However, this is the very element of the game that works against it. Early on, when you’re supposed to awaken the sprites, you’d come across eight sheep in a meadow. I was actually stuck here for quite some time, and I got so pissed I went and looked up the solution on the Internet. I don’t quite remember doing this for a mobile game ever before. Anyway, I never understood why the sheep had to be clicked in such an order to release the sprite.

From here, what I did learn though was whenever you had to free a sprite, just tap or swipe all over the screen and eventually you’ll get to a solution. That sucks, because there is no actual element of solving a puzzle of some sort, just sheer luck.

Another undoing of the game – and this became apparent after the halfway stage – is that you end up travelling a lot from one corner to another of the world after trying to figure out what exactly you’re supposed to do next. It isn’t very big and takes just a few minutes, but the fact that you pass through those exact same locations time and time again made the game quite a borefest.

Repetition also makes up a lot of the gameplay later on. The first “boss fight” was actually awesome. It was almost a rhythm-based fight more than anything. But sadly, the second and third ones followed too closely to the first fight, and I found that a bit cheap. Also, whatever other fights you encounter in the game basically follow one same format.

Make no mistake, I am not saying Swords and Sworcery is a bad game – it is just that the gameplay aspect of it leaves a lot to be desired. Many people would also come to loathe it after a while as everything is so vague in the game (though this same vagueness may actually appeal to some too). Solving the “puzzles” has no proper reasoning. Traveling aimlessly from corner to corner makes the game a chore.

Still, whatever said and done, there is precisely no game out there that delivers the same experience as Superbrothers: Swords and Sworcery EP. The minimalist graphics and especially amazing (there’s no one word to really describe it accurately) music makes this something you have to try out. I had to force myself to finish the game, and you may have to do so too, but I implore you to try out this game nonetheless to see its sheer uniqueness for yourself.