So what you get when you mix Humans, Elves Dwarfs, Golems, and an ancient Evil? You get RPG Symphony of the Origin. This Kemco game is set in a period where Humans, Elves and Dwarves have banned together to fight Evils from the Earth-depths. You play as Ryle, a young apprentice swordsman whose parents were killed in an attack by the Evils.

Update December 6th, 2013 2:14pm PST: Symphony of Origin is now also available on Amazon’s App Store for $3.99. The marketplace link to it has been added below.

Shortly into the story the castle is attacked and during the attack Ryle finds a Golem underground that was built to fight the Evils. Ryle and the Golem are sent on a journey to meet the Elves and Dwarves of the kingdoms and find a way to fight the Evils. On their journey they will meet interesting new characters from different regions all with their own agendas and problems to solve along the way. 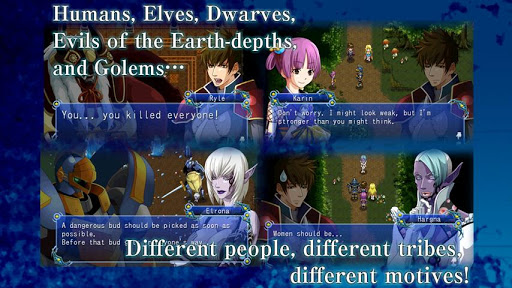 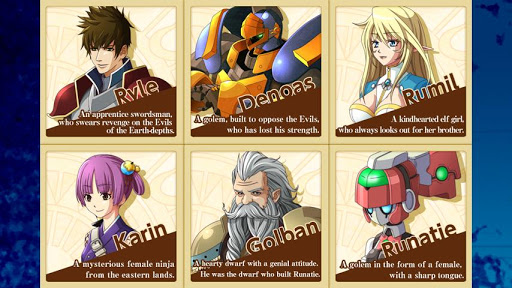 The interesting part about Symphony of the Origin is that it features smooth animation and dramatic voice effects during the battle which help make the battles seem more alive. The characters are voice acted so from time-to-time on and off the battle field you will hear them saying things which is a nice touch and makes the experience a little more richer then the average 2D RPG.

Monsters in combat will also feature weak points or can have pieces of gear damaged or destroyed. For example you might encounter a creature with heavy armor, attack the armor point and not the creature and the armor might fall off changing his appearance and making him weaker to attacks, however he might be less weighed down now and have faster attacks also. The other nice part is that you will physically see the difference in what the character looks like between him wearing the armor and it being destroyed. 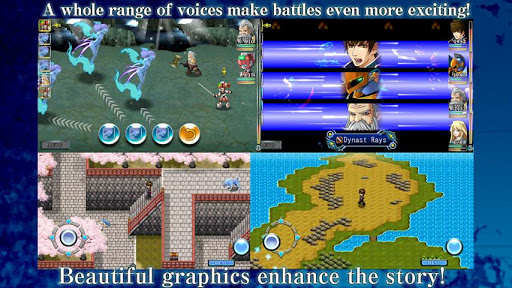 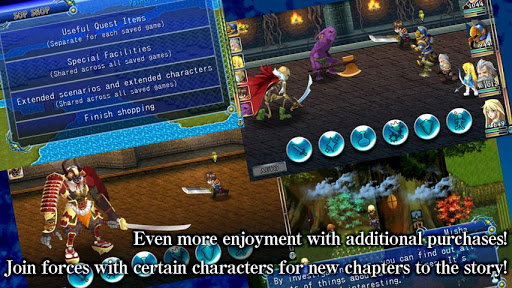 Customization is a key player here as well, and you’ll have tons of stuff to customize weapons, skills and magic by combining different parts. You can also have the ability to reinforce weapons at the Weapon shop or upgrade them to make them more powerful than before. There is also something called Merit Points which you can use to strengthen different statuses and these you can change at anytime.

All in all there is something for everyone in this game. You have a fantasy setting with Humans and Elves and Dwarfs. You have great sound effects and spoken voice and you have characters that you can develop as well as so far a good story. Check out the game on the Play Store. It might set you back $3.99 but it seems like there is a good amount of content to warrant the price.