Wind Up Knight was one of my favorite games released on Android in 2011. Hence, it came as no surprise that I was very much looking forward to what would come out next from the minds behind Robot Invader. Well, that “next” is here in the form of Rise of the Blobs. This is basically a cross between Tetris and a match-3 puzzler, a far cry from the demanding precision platformer that Wind Up Knight was. In any case, is it good? Read on to find out.

As the name of the game may have already suggested, colorful blobs rise from the ground and your job is to prevent these from reaching a marshmallow stranded at the top of the tower. How you go about doing that is simple – the marshmallow throws down fruits one after another, and you have to spin around and match that fruit to its colored blob. To eliminate said blob, you tap on it to pop it. When you pop it, you also eliminate other blobs of the same color that are adjacent to it. 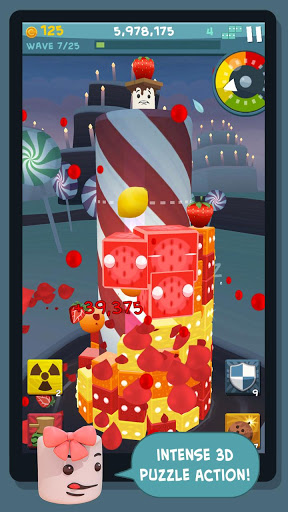 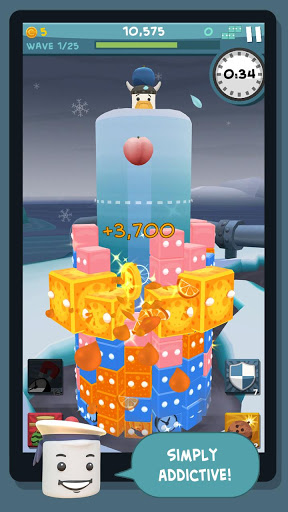 So basically, on the “normal” mode, you have to stay out for as long as possible and avoid the blobs from reaching all the way to the top. At the same time, you’ll want to rake up as many large combo chains as possible as this will contribute to your score. You’ll have somewhat pricey power-ups at your disposal and also are able to purchase perks that would make your job of keeping the blobs away a tad easier.

There are a further three more game modes that you can unlock – they play out basically in the same manner but have different objectives – one is time based where you collect clocks to prolong the game, another requires you to eliminate ticking time bombs and the final one has four (instead of three) colored blobs in which you can match the colors in a certain pattern to earn bonus points. In all of the modes above, the pace of the game procedurally increases.

As you level up, you also unlock new locations. The locations here are vibrant and are among the standout features of Rise of the Blobs. However, leveling up is a mysteriously slow affair. I had to play for over two hours to unlock the second location, which required me to be Level 2. The next one is at Level 5, which should take a further three hours or more to unlock. Of course, you could skip through all this by unlocking everything with a hefty amount of coins (25,000 of them to be exact). 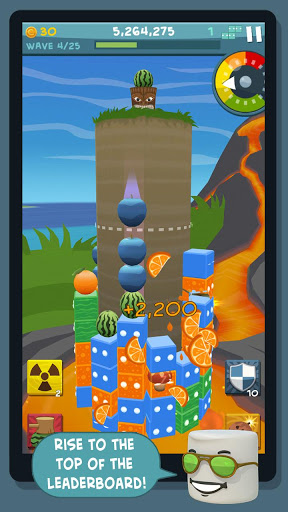 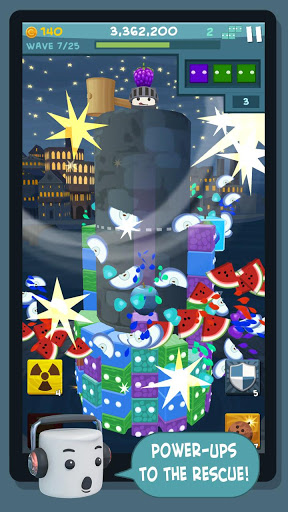 The biggest problem with Rise of the Blobs is that it simply isn’t rewarding enough. You have objectives to complete which ultimately earn you decent rewards, but these come in batches of three – so if you get stuck at one you either pay a few thousand coins to skip or well, remain stuck. It would have been better to have rolling objectives instead, and that would definitely make the game more engaging and liven up things a bit.

Aside from that, the repercussions of this being free are clear to see by the extremely slow rate at which you earn coins. On average, after doing some early upgrades, I’d be lucky to even get 100 coins per game. The lowest upgrade tiers for each perk costs 7500 coins, and this quickly increases to 2,000 and then 5,000 and so on, and this is the same with the cost of upgrades for power ups.

Additionally, purchasing the one-time-use power ups is a costly affair too, at 500 a pop. Power ups are actually an important aspect of the game as they spruce up the gameplay, but unless you pony up for more coins via an in-app purchase, you’ll have to be extremely frugal with the limited power-ups you get as rewards from within the game.

There is no denying that Rise of the Blobs screams polish and brings something relatively original to the table, but the brilliant underlying concept is screwed up by emphasizing in-app purchases too much if you want to reap the optimum level of enjoyment. Without using power-ups for example, the gameplay gets boring pretty fast. Nevertheless, Rise of the Blobs is decent enough to warrant a download, but be warned that you should keep your expectation levels for this one in check.