It’s hard to describe exactly what Elder Sign: Omens is about. It’s basically a board game in which you and a group of adventurers — either NPC or ones controlled by friends — attempt to solve mysteries before you go mad. Really, if you are familiar with Lovecraft and all of that mumbo jumbo about crazy gods and the end of the world (which I am not) then you will know what I’m talking about.

I am familiar with Fantasy Flight Games, however, and Elder Sign: Omens is one of their attempts at bringing a popular board game to mobile. I’d say they mostly succeeded; the handheld experience feels very boardgame-ish, and the beautiful artwork and lovely music and sound effects round it up to something good. 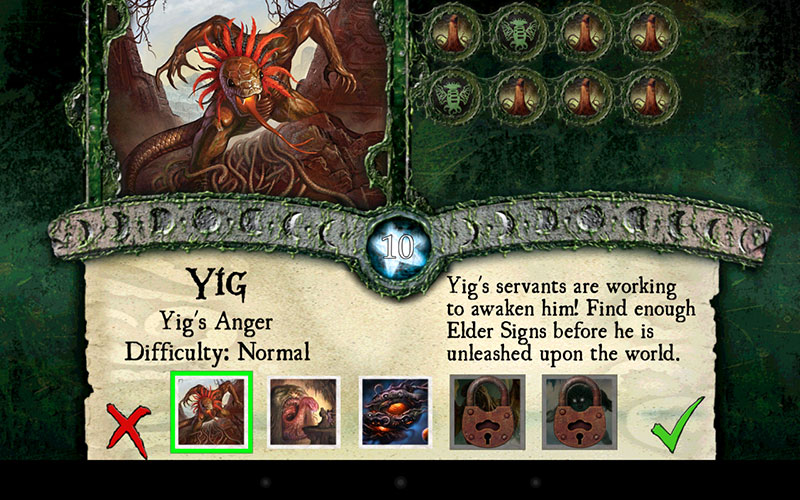 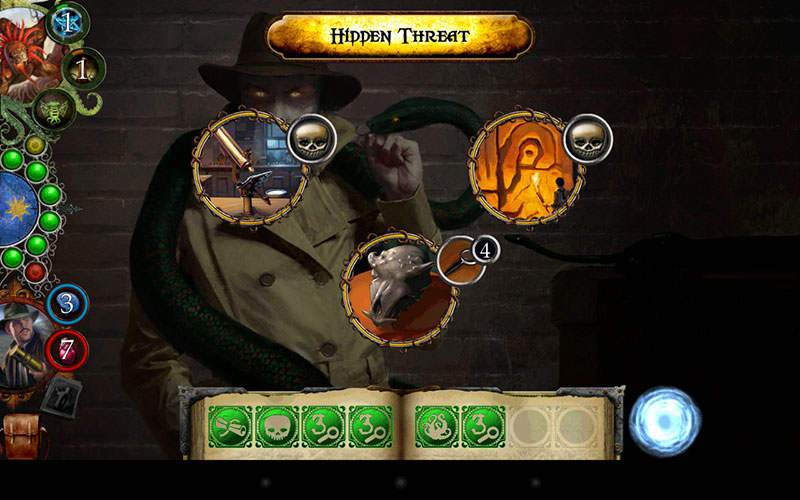 I wish I could explain exactly how the game works, but again it’s hard to without actually showing you. Each member of your hand-picked team has his or her strong points, and you try to assemble a team that can work together best in order to solve mysteries. How do you actually solve mysteries? When you first begin to play it really seems as though everything is left to chance. You are handed several different icons and need to match those icons to unlock different parts of the greater mystery, but whether or not you get the icon you need is a result of chance. The game is sometimes cruel in the way it gives you icons that you might not need, so you have to approach it with the understanding that you will lose many of the battles in the greater war. In fact, I’ve yet to do very well in the game but its seemingly simple gameplay keeps pulling me in and the ability to pause or save a game makes it easier to pick up where I left off.

The artwork is great and its simple execution means that you’ll probably be able to play this one on a variety of devices. I’m all for fancy animations and graphics that push my Nexus 7 to overheating, but I’d rather have good gameplay over graphics any day. Elder Sign: Omens is a recreation of a board game, so fans of dice rolling and strategy will feel at home. You can play solo if you want but you can also pass and play to a group of friends, each one representing a different member of the four person investigation team. I have no friends, unfortunately, but I still had a good time trying to figure out which character would help me out the most. You can make up your team of 1 to 4 investigators, and as each character takes his or her turn rolling the dice you will either succeed in matching symbols to unlock mysteries or you will fail, adding to damage or possibly losing some sanity. If you’re not careful you will gain Doom points. These points accrue and at midnight each night the tally is taken; if they fill up a dozen slots the great Azathoth wakes up, causes world destruction and sends you to crazy town.

There are a few bonuses and items that act as buffs in the game. If you succeed you can gain these helpful items. At first you will probably fail as much as you win, but the items can often make the difference. That’s more of the strategy half of the game showing; knowing when to use items, which items to use and how to outfit your investigation team.

The embedded tutorials that come with the game made me wish that more titles used a similar system. As you first step into sections of the game, you are given the choice to watch a tutorial video. Sure, the videos pack a good deal of information into only a few minutes and it can be often be confusing to take it all in, but these are videos we’re talking about. Name the last title that gave you helpful tutorials in video form. The transition from video to gameplay is seamless, so you’re not opening a browser window or having to look up pages of wiki articles to understand how to play.

All of the helpful tutorials won’t make it crystal clear, however. The fact is that you are going to fail more often than not until it all sinks in. At the point I am at in the game I am still feeling the sting of failure and the crush of madness more than I would like, but the game is fun enough to encourage me to keep trying. Does this mean that non-board game fans will enjoy Elder Sign: Omens? It’s possible that unless you enjoy strategy and puzzles you will find yourself skipping this one or asking for a refund from the Play store, but I would encourage you to stick around and keep plugging away at it. If you’re lucky, you might even defeat a monster or two, but only after several failed attempts.

That’s half of the fun, though, isn’t it?