HeroCraft has released a new casual puzzle game onto Google Play called Catch the Candy which also happens to be on sale to celebrate the game’s launch onto Android. Originally Catch the Candy started off as an online flash game which has not been ported over to Android so you can continue feeding your little blue creature candy.

As you may be guessing from what you’ve read already, your goal is to get your little blue creature to eat the piece of candy in each stage. This can be done either by getting your little blue creature to the candy or by getting the candy over to him. You will have to utilize his sticky slingshot arm in order to move him around each stage, overcoming obstacles and other hazards so he gets his candy. 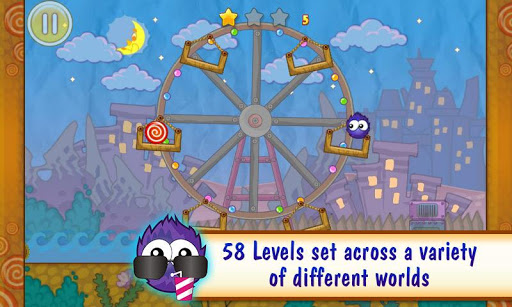 Some objects can be moved as well such as crates that can fill in gaps in the ground. A lot of the objects, whether you have to overcome them or move them, are physics-based so you’ll need to take that into account when trying to solve each stage.

Catch the Candy is currently on sale for $0.99 to celebrate the launching of the game. The sale is only for a limited time so if you’re looking for a new, slightly casual, puzzle game to try out then you might want to check out Catch the Candy.