From the makers of Doodle Grub comes a new announcement about a new game that will be heading our way soon called The Sandbox. Fans of pixel art are going to find their own personal little heaven with this game as players will be able to create worlds that will be completely in pixel art. You will also be able to destroy worlds in a blaze of pixel art chaotic glory as well.

This game is currently available for iOS devices and has garnered itself about 2.1 million players worldwide since its release. In terms of a sandbox style of game, this one lets you create pretty much anything and everything you could want in your pixel universe. When we say everything we really mean everything, right down to the background music. 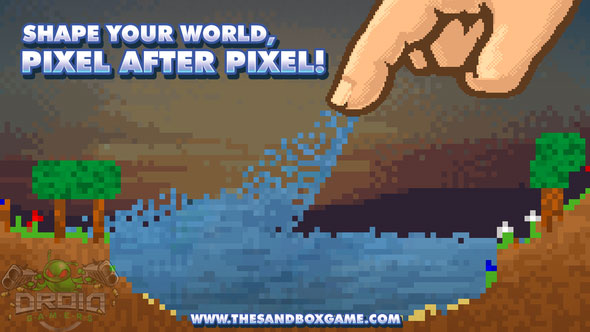 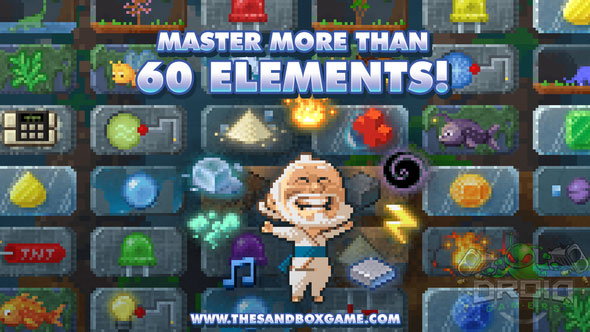 – 88 elements in total to experiment
– 5 exciting campaigns — a whopping 70 game levels in all!
– Already 160.000 worlds shared in the Online Gallery to explore!
– Millions of possibilities. Infinite landscape designs. Countless different chemical reactions. Nothing is beyond your reach!
– Embrace your inner Pixel Artist to create or recreate amazing masterpieces
– Compose your very own chiptunes melodies within the game
– Bring life to your creations and watch them evolve, eat, reproduce and die
– Recreate the Jurassic Period with giant dinosaurs and volcanoes! Protect your dinosaurs from extinction or recreate the BIG BANG and make them disappear!
– Utilize our new Blueprints and add awesome real-life wonders to your worlds: the Eiffel Tower, Chichen Itza, the Pyramids, the Leaning Tower of Pisa, the Statue of Liberty — even a Pagoda!
– TNT and C4 are now available! Wreak havoc with powerful explosions!
– Deep-sea fish and fireflies come to life before your very eyes!
– Create amazing chain reactions with several sensor types, including liquid, light and temperature!
– New ways to acquire FREE Mana, such as watching videos clips or many more!
– Create your universe and then share it in The Sandbox’s Online Gallery
– Browse the gallery to see other players’ creations
– Rate other players’ worlds and add elements too

Interestingly enough, there are campaigns in this game, five in total to be exact, which contains 70 levels in all to play through. If playing the game that way isn’t your fancy, you can just build worlds and destroy other ones instead. This is probably one of the most detailed sandbox games available for mobile considering just how much you can build and create including elements like background music and so on.

So when can we get our hands on all of this pixel goodness? Well luckily we won’t have to wait too long as Pixowl plans to launch the game onto Google Play by the end of this month. In the meantime, time to start figuring out what you want to build… or destroy. The only difference between the Android version and the iOS version will be the inclusion of Humans. The Android version won’t be coming with Humans at launch but it will be added shortly after in an update.