nVidia today decided to come out an officially announce the other chipset we’ve known up to now as Project Grey. We have reported on the Tegra 4 series having two chipsets for awhile now, one being codenamed Wayne (normal Tegra 4) and the other being Grey. Well Grey is now officially known as Tegra 4i and it is nVidia’s first integrated LTE Tegra processor.

As most hardware enthusiasts know by now, Tegra 4 chips sport Cortex A-15 CPU cores but the Tegra 4i actually comes with something called the Cortex-A9 R4 which is labeled on the lovely slide below as clocking in at 2.3Ghz. According to nVidia, the Tegra 41 delivers more power than its closest competitor, the Snapdragon 800, but at half the size. 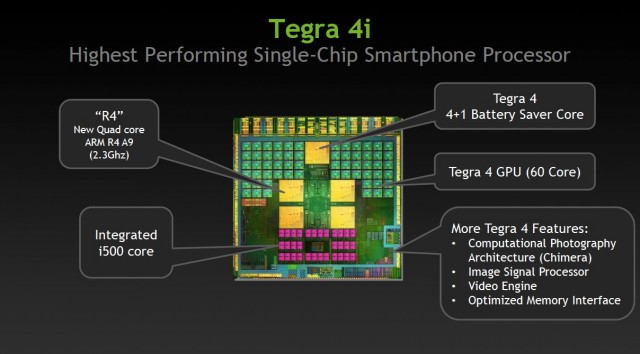 nVidia has a rather in-depth blog post regarding the Tegra 4i and i500 LTE modem for those of you who like to dig deeper into these things.