Jetpack Jinx is a game that we’re all familiar with. You control your cute little character as it jumps up, and up, and up and try to keep it going until he simply cannot go up anymore. The gems you collect as you rise keep you going like a sort of perpetual motion machine, but the fun often turns into frustration. Is it fun to attempt to best your own score by continually making your character jump higher and higher? Sure, in a primitive sort of way, sort of like playing with jacks or climbing a tree. The problem is that, thanks to today’s bloated market, I have no idea if this game was made for children or just for incredibly stoned adults.

Either way, I don’t care. I’m not a child and certainly haven’t smoked pot in a long, long time but still found myself getting into the base fun that Jetpack Jinx offers. I don’t care what my score it, seriously. I couldn’t care less if my score was 1,000,000 or 200… I was busy enough watching the pretty colors fly by. Occasionally I would grab a helmet from the sky and ram my way through all sorts of things, and then I would get a big jetpack thing and it would shoot me through screenfuls of colorful gems and then I would fall way down and then… 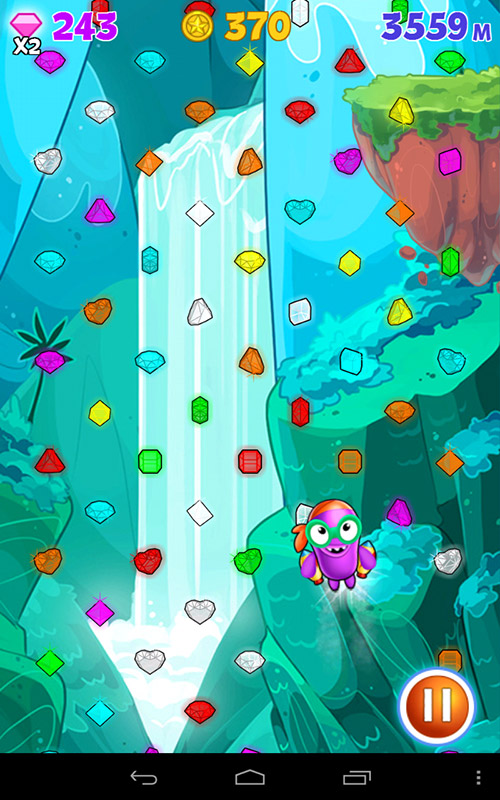 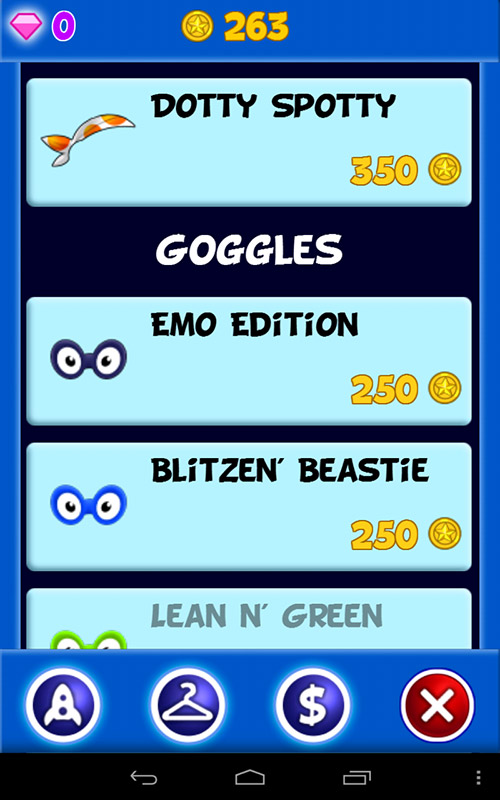 …well, you get the point. It’s actually nice to play a game that acts, well, like a game. Or at least an activity. I’ve come across so many titles lately that call themselves “epic adventures” or something filled with “massive battles” but that turn out to be flat one-button snoozefests that I’ve become a bitter old gamer well ahead of schedule. Jetpack Jinx is just what it says it is: a fun thing to play with. And, get this: there are no ads, it’s free to download and the developers, Bubblegum Interactive, seem to make money on the game by selling buffs and fluff-stuff. I wasn’t hit with an ad wall or annoying pop-up once. Yes, I know… unreal. We’re used to games that offer a free client but force us to watch ads, download additional games or content for free goods, or literally make us stop playing until we buy something. Of course I have absolutely zero issues with a developer who wants to make money, but tricking players or forcing players into a purchase feels a bit like being caught off guard by one of those pollsters at the mall. It’s generally harmless but annoying. Games should not feel like an annoying guy with a clipboard.

As much basic human fun that I had with Jetpack Jinx, there are a few issues that can luckily be fixed… just for me. First, if you get into a cool rhythm and find yourself collecting more bright gems than you ever thought possible, a banner can suddenly appear at the top of the client that lets you know just how wonderfully you are playing. Great! A banner that covers up the top of the screen, that area that you rely on to tell you what’s coming next. It actually makes it harder to play at the exact time you do not need it be any harder.

The game’s controls can be tweaked a bit as well. Your character can run off of one edge and will come back from the other. When you couple this odd behavior with controls that are a bit too sensitive, you’ll find yourself back in frustrating territory. It’s unfortunate that the game’s controls aren’t as smooth as butter because the entire game is based on controls. The artwork is cute enough and once things get going and you find yourself in the zone of gem-collection perfection you’ll be having a good time, but then one little twitch in your arm sends your character falling to the ground or an annoying banner pops up and cramps your style.

Those are minor gripes, though. The cash-shop is cute and the game truly seems free (I keep waiting for that to change) and it’s the perfect title to give to your 10 year-old nephew so he can show you how bad you are at it. I’d easily recommend it; I mean, it’s free and runs on all of my devices smoothly. I’d like to see a patch or two to smooth the controls and would love to see those banners move to the bottom of the client. Other than that, Jetpack Jinx is goofy fun.