Back near the end of February we talked about a new rhythm-based game that the folks over at Crescent Moon Games were getting ready to publish called Zen Training. As you probably already know about Crescent Moon Games, they don’t publish anything unless it is a good quality game which usually is also pretty unique. Zen Training falls right into that category as it is a bit of a different type of rhythm-based game.

Zen Training puts players in a zen garden which has a tree in the middle of it. This tree is pretty special and is surrounded by five stones with runes carved into them as well as having a specific color for each stone. Based on the idea of Order and Chaos (not the MMO, more like Ying/Yang), players will have to maintain the balance of Order and Chaos which is done by matching the stones that surround the tree with the runes that fall from said tree. 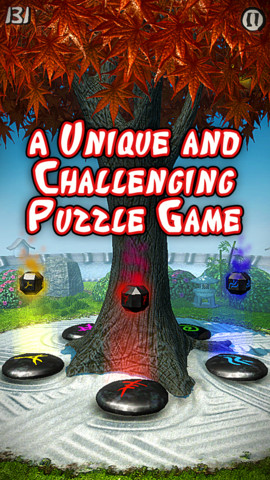 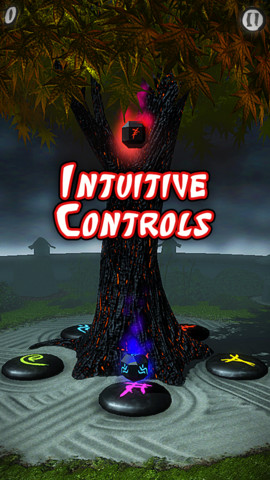 – High quality 3d Graphics: Push your device to the max with fully 3d graphics and dynamic environments.
– Intuitive Controls: It can be played with just one finger.
– Addictive Gameplay: Challenge yourself and others to get the best score on infinite game levels.
– Funny Bonus Levels: Five different bonus levels to achieve more points and much more fun.
– Charming Soundtrack: Live a totally immersive experience with zen music and sounds that change together with graphics and mood.
– Social Features: Share your results and challenge your Facebook and Twitter friends.

There is literally no end to this game as there are infinite game levels to play. That means you just keep on going until you screw up enough times to end the round. Bonus levels are available as well to find which offer up even more ways to earn points and an overall higher score.

If you’re up for playing a bit more of a relaxing rhythm-based game then you might want to check out Zen Training. You can snag yourself a copy of this game off of the Google Play store for a mere $0.99.