Do EA microtransactions really push it that far?

I downloaded Real Racing 3 by game giant EA in the hopes of enjoying a bit of “real” racing. Usually every racing title I experience is cartoony or over-the-top, and I was in the mood for a game that made me feel more, I don’t know, real. The game cost nothing so I had no excuse to try it out. We’ve talked about it on the site before but I was eager to see just what all of the fuss (much of which I found out about later) was about. Being that EA had recently ran into more drama than they could possibly ever want when Sim City’s servers blew up, I was even more eager to see how they fared in the mobile market. I normally skip their games and go for Gameloft when I want a larger, shinier title.

Within a few minutes I was sucked in. The game is fantastic. Sure, the graphics are a bit jagged and tuned down from most games you’ll find on a console or PC, but on the smaller screen of my phone (which is at the same resolution as my Nexus 7 tablet) the visuals are crisp and lovely. Remember, this is a “real” racing game, meaning that turning and braking feels more like you are controlling a real car, as though anyone who might be reading this right now has ever experienced that feeling.

Soon enough I ran into problems; my car was broke down thanks to my aggressive driving style. See, I prefer to just push my way through the crowds of other cars until I hit the front of the line. It’s a delicately obnoxious operation and can result in much of my winnings being spent on repairs, but the extra experience I get from winning feels oh so good. Repairs be damned.

The drama kicks in when a repair takes actual “real” time to complete. Most of the time it was only five or so minutes for me, but I wonder how bad it gets as players become much more skilled and compete in tougher races. I Googled the game and found plenty of sqwaking and moaning about the fact that EA would dare to put these type of microtransactions in their game instead of charging for everything outright or, as some idiots put it, giving the game away for free. Yes, some people literally feel as though the game should be literally free in every aspect of the word. 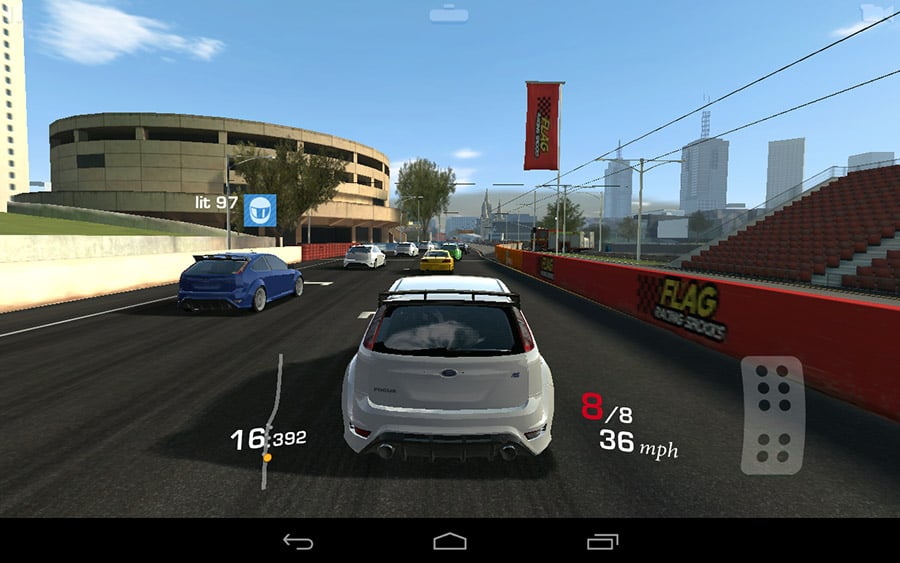 It is a sneaky way to make money but I haven’t once had my fun smashed by having to wait for repairs. I would either throw down the two gold to finish the repair instantly (a lot of that gold I earned while racing) or just put the game down and do something else. I found that my habit of playing multiple games at once works great with today’s freemium market; this means that if I run into an empty energy pool or lengthy repair I can simply play something else. I must be crazy, though, because the drama that comes from EA-type microtransactions makes it seem like the world is coming to an end. Yet, the games and the company continue to make money. A lot of money.

Would it honestly be better if EA charged five or ten bucks for the game outright, skipping the in-game purchases? Remember, the mobile market is still relatively new and players still tend to think that mobile games should be cheap or free. Perhaps it’s the smaller screens, but even mobile fanatics sometimes lean towards thinking that mobile is not yet at the level to ask for money upfront. I beg to differ; mobile’s quality is not only there but it continues to grow, and it grows at a pace unlike any other market has seen before. The devices are becoming more powerful at lightning speed and the games feature AAA artwork and top-notch gameplay. So, why doesn’t a massive company like EA just ask for a purchase price and skip the microtransactions? It wouldn’t work, that’s why.

I’d rather pay a few bucks occasionally (and that IS all it comes down to most of the time) and have the ability to try the game out for absolutely no money than have to pay five or ten dollars for a game that might just be a piece of crap. Also, I like the fact that the mobile market allows those players who haven’t much to spare to play the games as well. Sure, the market is so full of cruddy games that it can be mind-boggling but it’s so rare that we have to even pay a dime to try them out… in the process we find some real gems. It’s brilliant and the player has more power now than ever. If this freedom of choice means that we occasionally have to wait five or even 20 minutes for a repair to complete, or need to throw down five bucks every dozen races than the world of mobile gaming is in a great place.

Real Racing 3 is great fun. It’s made by a great, big “evil” company but I could not care less. Mobile gaming is the cheapest way to get the most fun out of the most convenient and powerful devices, thanks in large part to the successful giants like EA.

What do you think, does EA push it too far with in-game purchases?