Gameloft’s been enjoying success for quite a long time, but many would say that the success is due to the developer’s ability to copy or clone other successful titles. There is a lot of truth to that statement, but lately the company has really become known for making just damn good quality games. Their titles range from strategy city-builders to shooters to mystery puzzlers, providing enough entertainment for everyone.

I’ve always enjoyed some of their titles but didn’t really find myself completely loving one of their titles until I came across Zombiewood, a new dual-stick shooter that places the player in the shoes of a grungy stuntman type, tasked with running and gunning his way through literally hundreds of zombies at a time.

First, the game looks awesome. It’s so stylized and goofy that I can almost forgive much of the typical borderline sleazy and sexist imagery that permeates games with heroes like the one in this game. In fact, it’s hard not to smile when you are blasting your way through mountains of zombies in a non-stop storm of bullets and explosions. Environments are destructible and you will often find yourself facing down giant zombies with what seems to be lasers coming out of their eyes. Don’t get me wrong, none of this is new or innovative… we’ve seen shooters and especially dual-sticks for a while now (Hell, since I was a kid even) but this is just done so well. It looks so good, and feels so smooth. 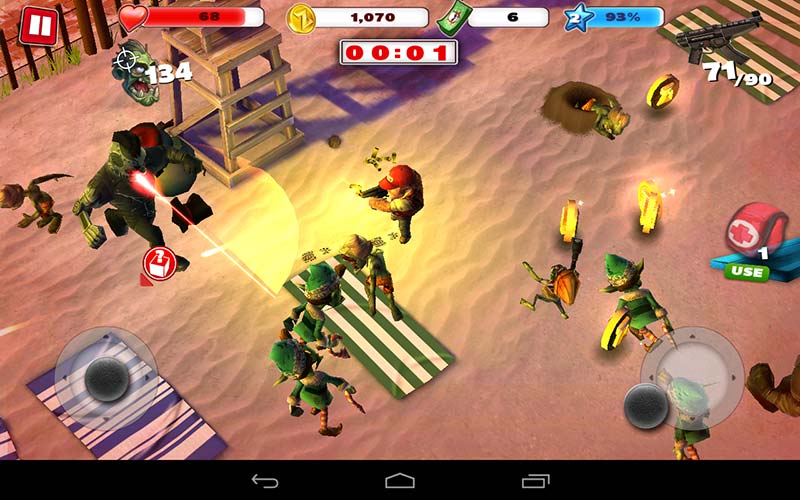 Occasionally when a scene would become a bit too noisy and packed with the undead I would notice barely a stutter on my Nexus 7 tablet, but I would swear that the braniacs over at Gameloft must actually test the games they make on different devices! I know, I know… it’s shocking to think that a developer might very well be doing something that seems so incredibly obvious, but developers are known to get stuck in a tunnel, testing games only on the equipment they have around the office which leads to possible issues upon release. Gameloft is the McDonalds of game-making; you know what to expect and you know how it’s going to feel.

I will complain a bit about how sludgy the controls seemed to feel after I played for a while. I don’t know if it was the result of a memory issue, or with my tablet becoming bogged down and not responding as fast as I would like or if it was simply a matter of my thumbs becoming sticky with sweat or, you know, chip grease. Either way, it’s not a major issue but one that does have me looking for a good snap-on or Bluetooth controller. Hmm, who could I ask for such advice? (looks at the editor.) 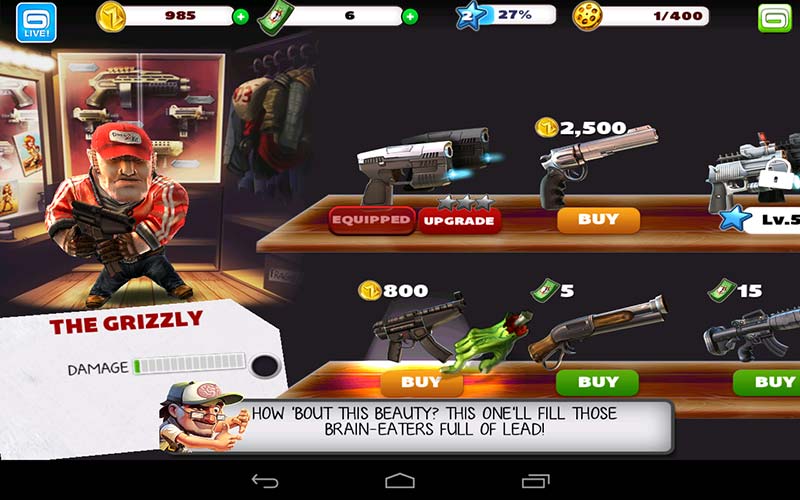 Zombiewood provides a lot of free content but does insist on spamming you with offers for better weapons or even for other Gameloft downloads. I don’t mind it, really, but it does get annoying when you accidentally click on a pop-up or a market invitation and find yourself backtracking. I mean, sure, offer players new and better weaponry but please… don’t do it so often. It’s simply annoying. I will gladly throw some money into the shop for a title of this quality, but I will literally go out of my way to ignore those pop-ups because they annoy the hell out of me. The truth is that these pop-ups, like advertisements on television, do work when the person who sees them is in that particular market. I just happen to rarely be in the market for any of the items that pop-up.

Zombiewood is sort of gross, a bit sexist in that 70s movie way, non-stop, hilarious, fantastic looking, easy to play and figure out and sometimes very challenging while still being fun. Would I recommend it to you? Of course I would, and I would recommend keeping it on your device because it’s perfect for grabbing once in a while to play through a mission or two. Remember, Hollywood won’t save itself and there are always more zombies to shoot!