Driven by the need to “enable gamers to get the best gam­ing exper­i­ence possible,” the original Phonejoy was generally well-received but was based on existing industrial design. Discontent however with the mobility of the original model, Phonejoy Solutions looked to Kickstarter to raise the necessary $50,000 fund the Phonejoy’s successor, the Play, an expandable Bluetooth controller for iOS, Android, and PCs. January 3rd, 2013 – a mere 28 days after going live on the site. Phonejoy successfully funded the device, surpassing their intended $50,000 goal and raising $69,859, becoming the highest-funded Kickstarter project out of Hong Kong. 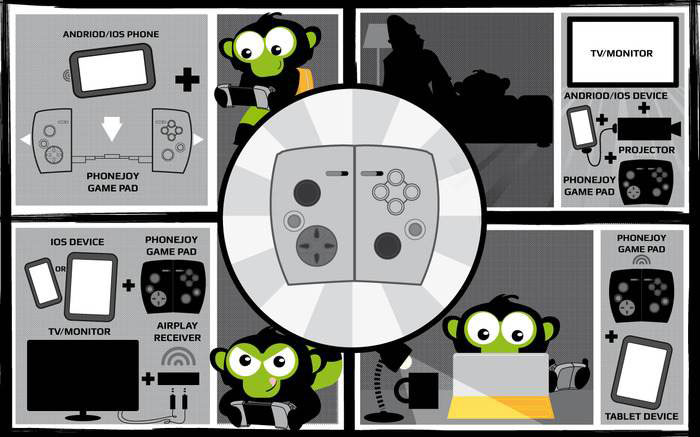 We have all used handhelds such as the Gameboy, Sega Gamegear and Sony’s PSP and others before and these devices all have great ergonomics in common, and this was our biggest inspiration, I believe. – Phonejoy

Phonejoy Solutions had a booth at CES, demonstrating the Play with working prototypes in a handful of user-voted colors, three of which: Red, White and Black, were final.

“We initially wanted to make the PhoneJoy PLAY just in jet black. But when prototyping we noticed, that with the emergence of white phones, not every user would be happy to match their white phone with a black colored gamepad. So shortly after we made a white sample and everyone loved the color and we were set on definitely producing a black as well as white version,” Martin Kessler, co-founder and CEO of Phonejoy Solutions told DroidGamers, “the third color – Berry Red – which has been chosen last month by our Kickstarter backer offers a great alternative choice to the rather conservative choices of white and black.”

DroidGamers: Were you influenced or inspired by handheld devices like the Gameboy Color or Neo Geo Pocket color when designing the device? And did device colors play a role in the design of the Play?

Martin Kessler: We were inspired by a number of factors, we have all used handhelds such as the Gameboy, Sega Gamegear, Sony’s PSP and others before and these devices all have great ergonomics in common, and this was our biggest inspiration, I believe. Most other gamepads for phones were simply too small, which made your hands feels cramped together and quickly uncomfortable after a prolonged gaming session. What we wanted to design was a game controller that a) suits nearly any phone, b) is relatively small sized and can be easily stashed away and c) still offers all controls needed for core games as well as ergonomics for longer gaming sessions.

Even among among more established and technically impressive devices like the MOGA Pro and Nvidia Shield being shown at CES 2013, the Phonejoy Play stood out to me because of its variety of colors. Trying to deconstruct just what I found so appealing about the set of colors that make up the Phonejoy Play, I found that it’s hard to describe the appeal of it without comparing it to past handhelds.

DroidGamers: The Play feels delightfully nostalgic. It brings back memories of Nintendo’s“Play It Loud!” and “Who Are You” marketing campaigns, where the ads’ focus lied on the Gameboy and the colors it was offered in. I associate these colors with a certain influential period of time and aesthetic – similar to what the Phonejoy Play incited for me.

Martin Kessler: In theory, we’d like to offer all sorts of colors, just like the Gameboy Color used to. But economically speaking, we are not in a position to do so at this point as a small start-up.

DroidGamers: To play a video game on a modern smartphone is to play a videogame on a characterless, colorless black slab; it’s near-invisible – which is a far cry from the outlandish and cartoon color combinations of handhelds from the Gameboy-era.

Martin Kessler: We intentionally did not design the PLAY as a too colourful game controller, because we believe it may not match the often pure and aesthetic looks of modern phones, so in that sense the design was also very well inspired by phones, as they will primarily connected to the PhoneJoy PLAY.

Touching on the “Pure and aesthetic looks of modern phones” that Kessler mentioned, designing around that one unified, anemic aesthetic that most modern smartphones share. It’s industrial, defined and overall… Kind of boring. For all the 3DS and Vita’s (relative) minimalism and sleekness, they still manage to include some degree of visual whimsy – the 3DS’ layered cake coloring scheme and the Vita’s back touch (Motorola Charm, anyone?) There’s a stigma against colors being associated with childishness or immaturity – similar to how screen size is equated to quality. The argument holds water, but I can’t be the only one calling for some degree of visual diversity here? Maybe it’s an Android thing. Windows Phone 8 devices aren’t afraid to stray from conventional color schemes. With the HTC 8X and Nokia Lumia line, color is as ingrained in Windows Phone 8’s identity as its live tiles (or using color as as identity)

Or it could be a western thing.

A look on Japanese wireless carriers, NTT Docomo or Softbank’s (Pantone 6,“25 colors to choose from”) or KDDI show much more colors than the stark shades/variations of black and white of T-Mobile or AT&T. Maybe it’s due to the multiple functionality of these devices – you wouldn’t want your gaming device to be the same color as your e-reader or work device. Or it may be the homogenization of smartphone design as a result of the pure saturation of mobile devices. I just don’t consider Amber Brown or Garnet Red particularly exciting colors. 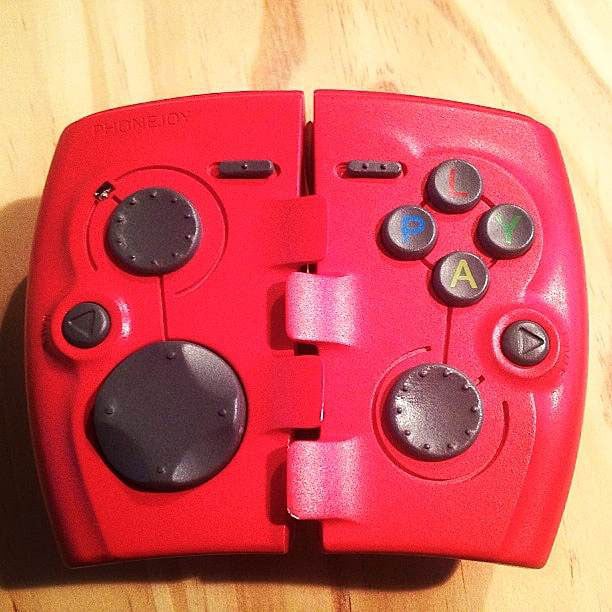 DroidGamers: What do you think about the lack of color in modern devices (smartphones, tablets, laptops)? Do colors even make sense with screen sizes growing and bezels shrinking (for example, Windows Phone 8 devices come in colors, but the majority of Android phones come in shades of Black, White, Grey and Red)

Martin Kessler: Well, making varying colors for one device surely adds costs, so I can understand that many opt for rather conservative colors or just shades of black and grey. Laptops, tablets as well as phones also need to appeal to a much greater demographic (i.e. from old to young, both genders, etc.), whereas our users belong to a much younger demographic aged 12 to 35. However, what we have noticed in terms of phones, tablets as well as laptops, is that many users actually opt for a case or, in the case of laptop, stickers in order to personalize their devices.

For a small gamepad, especially for an expandable one such as the PhoneJoy PLAY, it is however much harder to pull of such a feat. Anyways, I think there’s a good reason why you can buy game controllers, handhelds and consoles in all kinds of colors. Some even spend more than $200 to have their Xbox controller airbrushed and modded (see ControllerPlus for instance).” and “We think that that a game controller is a very personal device that not only needs to be functional but also needs to a great look and feel.

DroidGamers: Alongside ergonomics, practicality and good design, visually, how important of a role do you think color plays?

Martin Kessler: Color and design in general matters a great deal to us, because we see a gamepad as not just a functional device that solves a problem, but also a life-style accessory that needs to match its users own preferences and style. In the end, nobody wants to be seen on the subway with an ugly-looking gamepad, right?

DroidGamers: What do you think about mobile gaming controllers/accessories? Do you think that is the future of mobile gaming, or do you think that it’s an interim solution – that there’s more from touchscreen a that we haven’t wrapped our heads around yet. Or maybe even a modular future – where a mobile device could act as, say, a television remote, authentication device and game controller, and it has peripherals – much like the Phonejoy Play – to accomplish those goals and stretch the functionality of a device.

Martin Kessler: That’s surely a difficult question. I think phones are certainly becoming a central media device that – apart from their primary communication function – can do a little bit of everything, from web browsing, photo shooting, music & video playback to gaming. I think you can see fewer and fewer people who buy a point and shoot camera, mp3 players, and even handhelds for gaming. However, a lot of people will still have their dedicated stereo set, DSLR camera and consoles, which will needless to say be always better than a phone at what they do. The beauty however is that everyone will have a phone, so these features can be enjoyed by a much greater amount of users, users who do not want (or can afford) to spend extra money on dedicated devices for these functionalities.

Nowadays, even some basic Android phones can be already used for some decent gaming. The only problem I see is that of the touch screen. Touch really works great for some games that have been made with a touch screen in mind, but it does not really work great for porting more complexconsole titles to mobile phones. That is because some of these games require greater precision unless you prefer to heavily rely on features such as auto-aim when playing Modern Combat for instance. Other games such as RPGs and action adventures make use of multiple action buttons, which take away a lot of screen real-estate and aren’t necessarily easy accessible. Some games such as Bladeslinger and Infinity Blade have tried to work around this issue by relying on gestures, which works a whole lot better than virtual buttons, but they still take away having to rely on one’s to dexterity in order to truly master a game. In short, we at PhoneJoy believe that the touch screen is not the answer for core gaming.

There’s less of a solid definition for what is considered a ‘core’ game on mobile devices. The “beauty” in everyone owning a phone is the element that complicates things most. Having a phone act as the lynchpin – one whose importance is always growing – and creating products and experiences around that is a tough thing to do. There are all these fresh and disparate ideas floating around, even though we’ve yet to see what sticks. I think companies like Phonejoy Solutions, companies who can successfully refine and execute an idea and see it through to production are the ones who will come out successful. Platform-agnosticism is the way to go.

DroidGamers: If possible, when will the Phonejoy Play ship to Kickstarter backers and when will non-backers be able to purchase the Play.

Martin Kessler: There is no definite release date as of yet for retail or online. On the Kickstarter front we have nearly finished the tool making, but we had some setbacks with our Bluetooth module manufacturer, as well as getting the PLAY MFi certified – which would allow proper game controls on iOS – has been quite an effort due to Apple’s notorious secrecy and strict requirements. But we are getting there, however it will likely take us a little longer than the initial April estimate. It is not ideal, but we really want to get this one right. There are already too many half-baked gamepads out there.

Thank you to Martin Kessler for taking the time to answer these questions.