There are a couple of games that will be arriving for Playstation Mobile in the near future. The two titles slated for release onto Playstation Mobile were both part of a recent indie game jam and are called Oh Deer! and Gunhouse, both of which will be released by Necrosoft soon. So what exactly are these two games about?

We will start off with Gunhouse which, as you probably didn’t guess, is about a house made of guns. Players will use this ‘house’ in order to defend orphans from alien invaders which is done by redirecting the guns the house is made up of and arranging puzzle pieces within the house. Definitely something a bit on the stranger side of things in terms of concept. 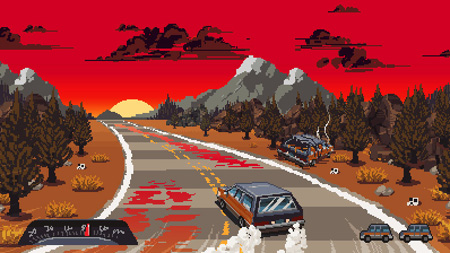 Oh Deer! on the other hand is a retro driving game that was inspired by games like Outrun. As you might of figured out by the name, you will be using your stationwagon in this game to hit as many deer as possible while driving. We are sure PETA will have something to say about this, they always do.

A few interesting facts about Oh Deer! though have come to light, some of the visuals were done by Mojang’s Junkboy while the soundtrack was worked on by Streets of Rage 2 and 3 composer Motohiro Kawashima who Necrosoft managed to get out of retirement for a moment.

Both games will be available ‘soon’ for Playstation Mobile compatible devices. No word on pricing just yet.