The Yesterday Review: Yesterday is never too late for a good adventure

Yesterday is a new point-and-click, click-to-move or click-and-hold-and-select adventure game (whatever the kids say these days) by Pendulo Studios that has been out for a while but is new to me. It instantly felt like a newer adventure game, a genre that many gamers remember only from the late 80s or 90s. I have really enjoyed watching the mobile market work hand-in-hand with the point-and-click adventure world and hope to see more blockbusters like Yesterday come out. The game might be short-ish, only spanning several hours (or several days if you play at the glacial pace I do) but it packs in almost too many details and intense moments.

The game immediately starts off on a violent foot, mentioning Satanic rituals, the homeless, insanity and sexuality. I must admit, however, that whenever a game tries to be “serious”, I sort of tune out. I want a serious story and I truly wish games were more dramatic during this time of silly games that rule the market, but there’s a fine line between being serious and just seeming cheesy. Yesterday generally toes the line successfully, but characters like a perverted hotel clerk who want to watch your character have sex just make it feel a bit like watching Porkies again — at my age. 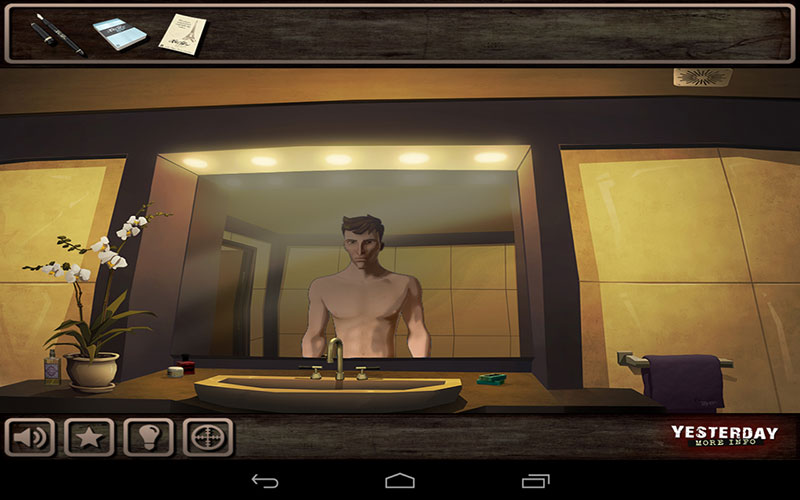 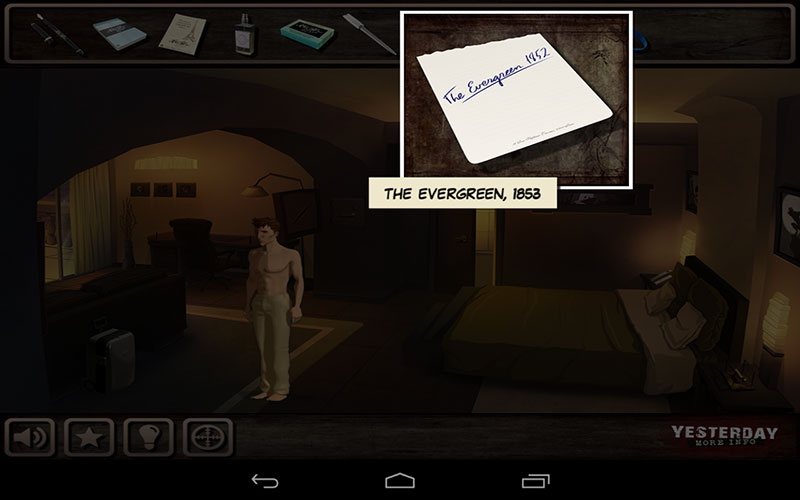 The artwork sort of toes a similar line. The environments look great and I absolutely love the UI and how simply and smoothly combining items works, but sometimes the more primitive animations make the characters feel hollow and weak. Luckily, the story is packed with enough intrigue for a mini-series and gives the game heft. Almost every scene leads to a frustrating moment, a moment when I would become confused and just be forced to set the game down to think about what to do next. When I figured the puzzle out, though, I felt a bit stupid but happy at the same time. A puzzle-based adventure game works wonderfully when it makes you smile one moment, grimace the next and want to throw it out the window after that. In lieu of making the player a literal part of the world, a good adventure title like Yesterday can at least make you feel some of the emotions that the characters do. I definitely felt as though I had lost my memory and was in real occasional danger.

The presence of Satanic rituals and other real-life scary things gives the game an edge, but I could do without many of the attempts to spell things out to the player. Sure, we’re on the case to solve a mystery, but a lot of the chatter between characters felt heavy and unnecessary and slowed things down a bit. There are some clues within those interactions, of course, but a lot of the time I was able to skip the longer, boring bits and still solve puzzles. One of the mistakes that mysteries or thrillers often make is to be too noisy. It’s very possible to be quiet and intense at the same time, although I could see less text equaling a much shorter game. So what, though? Without half of the goofy text I would have been sucked in that much more, no matter how short it was.

The puzzles are where the game shines, although they are not always as frustrating as I seemed to paint them. A lot of the time they are perfectly balanced to keep you on your toes while allowing you to skip the hint button. I had more than a few moments when I would actually make a noise of excitement when I discovered the answer. That rarely happens in adventure games for me. Even with all of the mistakes in Yesterday, the developers sure made the challenge level almost perfect. I have been playing all sorts of games long enough to know just how hard that balance is to achieve.

Yesterday is grand and I hope it encourages more games like it. We need games that suck you into a story instead of push you through a series of mechanics. Get Yesterday, enjoy it. Just keep it away from your kids.