The Neo Geo Pocket isn’t remembered for being the technically superior subordinate. It was remembered for the games. Though there were only a handful of NGPC games – around 85 or so released, dwarfed by the Gameboy’s library – the few that were there stood out as showcases of smart game design. Some of SNK’s technical fighters and more visual games like King of Fighters and Metal Slug came to the system in recognizable form. It was commendable having games that ran on, what was essentially, an arcade architecture be recognizable – and perhaps more importantly, playable – on a 16 bit handheld with only two buttons.

With Gunslugs, OrangePixel has inadvertently recreated that experience, for me. It artfully picks up subtleties in what makes a game like this feel and play exceptionally well.

Released for Android and iOS in January 2013, Gunslugs is an action-platforming game by independent developer OrangePixel, in the vein of shoot-em-up classics such as Contra or Metal Slug. While Gunslugs takes cues from those titles, it does not depend on them; it adds and subtracts elements where necessary and creates a fun, fast, and arcade-like experience all of its own.

In Gunslugs you play as one of 6 expendable, 80’s action movie-themed characters tasked with taking down the evil Black Duck Army, in turn, saving the world. The plot of Gunslugs is as shallow as the action movies it’s inspired by, but that’s okay. Any amount of story Gunslugs feeds you with is just an agent to propel you though the game’s multiple stages – whose difficulty scales accordingly.

The easiest gameplay comparisons to draw are that of 80’s/90’s shooters like Metal Slug, Gunstar Heroes or Contra. In its fast paced, side-scrolling, linear levels, 8-bit Bullet casings fly off; pixels of blood burst from wounded assailants as you fight your way to the rendezvous point.

There are six procedurally generated locales – a plane yard, a jungle, Siberia, Egypt and Hell – in which you enter Black Duck buildings, setting off a beacon and jumping from its crumbling remains. At the end of each stage, a helicopter flys you to the next area.

For all intents and purposes, Gunslugs is an arcade game, and it feels like it. Your single life and randomly generated stages really adds to the game’s coin-op-sans-coin-op gameplay. It successfully recreates the feeling of urgency that you get when playing an arcade game; you’re on your last coin, you’ve gotten a little further than you did before and you’re holding onto your last sliver of health, all in the hopes of reaching the end of a stage and besting your previous score. 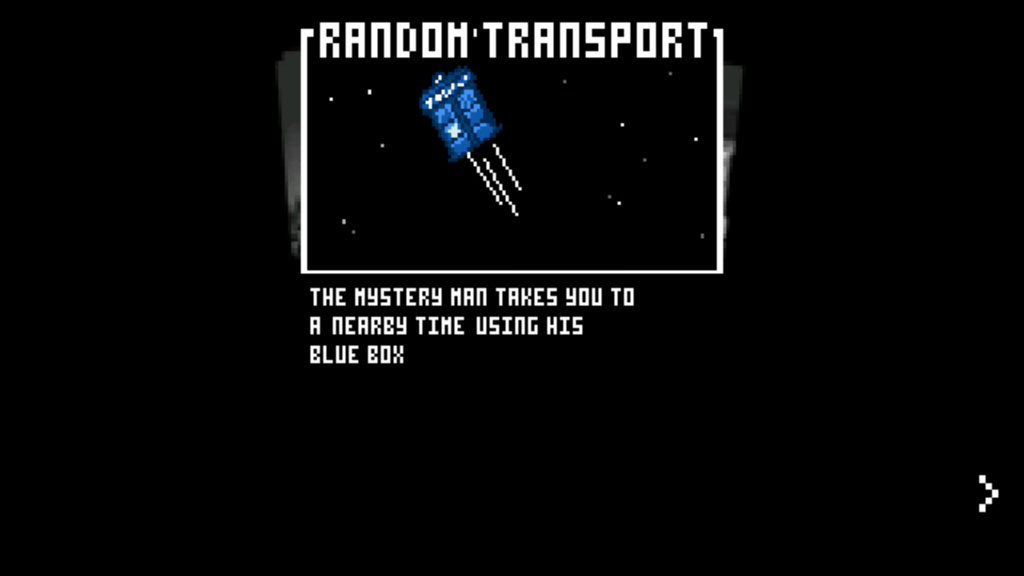 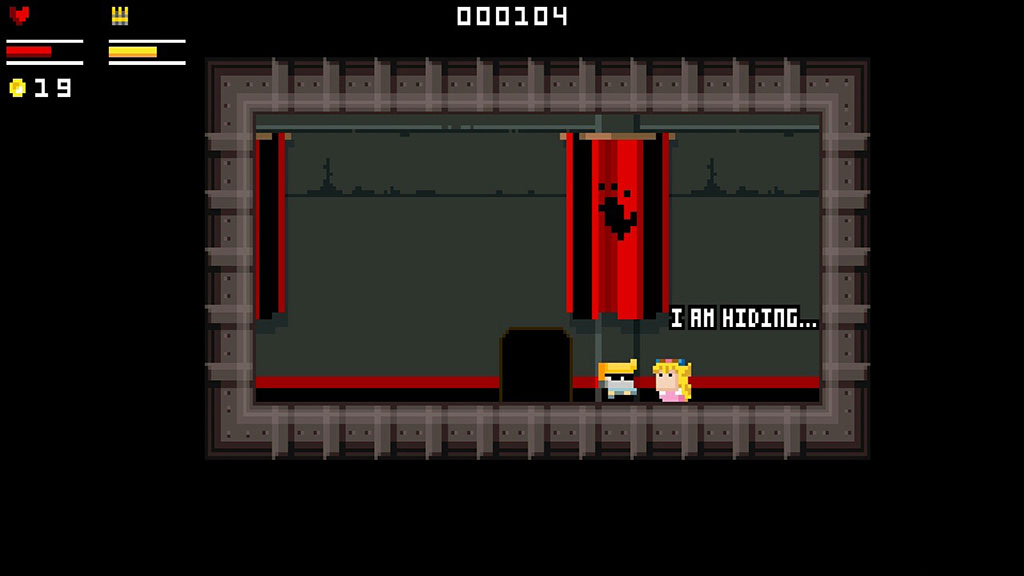 Gunslugs has a real sense of humor – much of which comes from its references. Certain video game tropes are picked fun at, visual references are plenty, at one point, you find a character strongly resembling Princess Peach and she gives you coins, telling you “I am hiding”, and proceeds to shower you in golden coins, which are the game’s currency.

The game’s music is done by musician Gavin Harrison, who also did music for other OrangePixel games. In game, the tunes are catchy and accompany the action nicely. They’re distinct and melodic – certainly my favorite OrangePixel soundtrack to date.

There are a variety of control options in Gunslugs. The touch controls are customizable, there’s MOGA support, works with the Green Throttle controller – there are even keyboard controls, which worked well on my Asus Transformer Prime. I’m not sure how difficult it is to implement these methods, but I appreciate the amount of time put into it. Gunslugs is one of the few mobile games I regularly play on my TV via HDMI and it feels completely comfortable there. 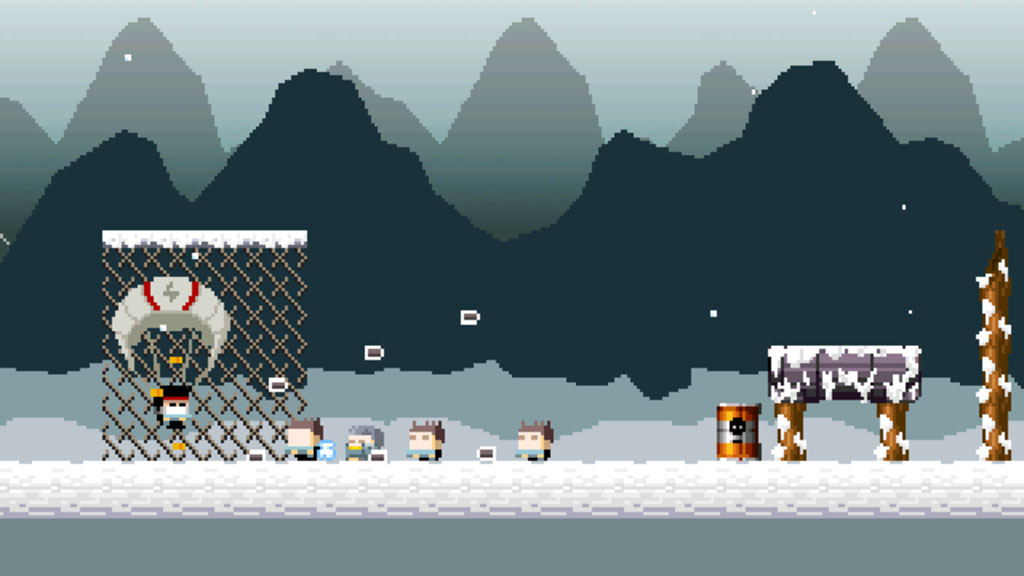 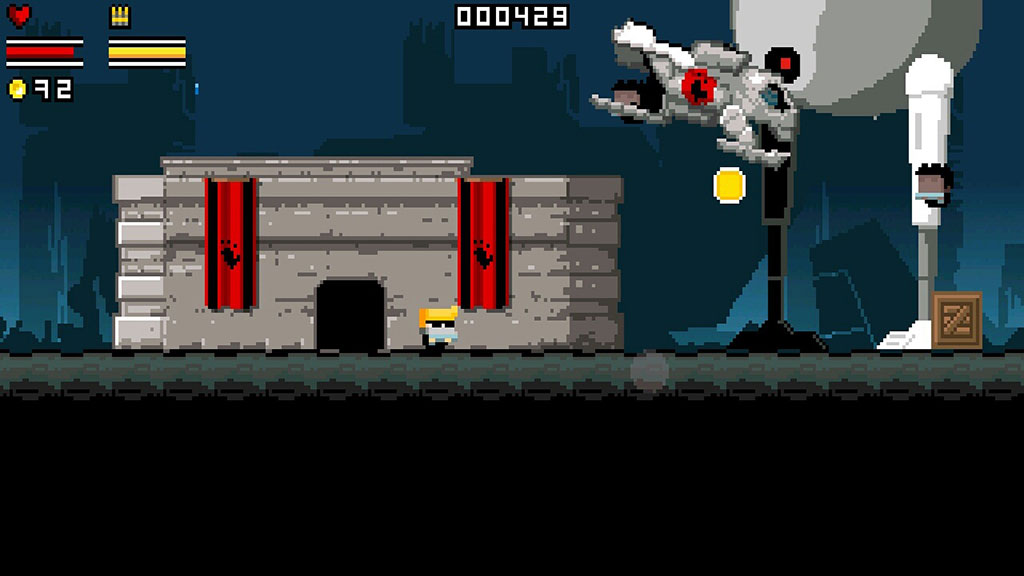 I appreciate all of the things the larger, more expansive games do. But Gunslugs shows how well a traditional, singularly focused game can successfully executed on a touch screen. It is a cohesive whole.

I don’t want to constantly compare Gunslugs to SNK’s Metal Slug series, but the inferences are so apt that it’s hard not to. OrangePixel is like the SNK of mobile gaming; Attention to detail, tight and responsive gameplay that feels great, beautiful artwork and music. As a retro game; it stands out for being playable. There is a mastery of touch-based 2d games on display here. In my opinion, Gunslugs is the best OrangePixel title to date.

There is a free version on the Play Store, but phase that out of your mind. Spend the $1.49 and buy it.