Carmageddon Review: Running over people, lots and lots of people

Carmageddon is a PC classic from the glory days of the vehicular combat genre. Even among a crowded market with games like Twisted Metal and Vigilante 8, Carmageddon stood out with how it approached combat, its use of black comedy and the sheer amount of gore. But how well does this PC game from 1997 port to Android?

A Unique Approach to Vehicular Combat

Anyone familiar with other vehicular combat games will notice that Carmageddon has a different style. For one, combat is performed completely by ramming your enemies. There are no machine guns, rocket launchers, mortars, etc. Think of it as a demolition derby with a violent twist. Also, each event can be won by one of three ways: destroying each of your opponents’ vehicles, legitimately completing the race, or mowing down all of the pedestrians.

As far as driving games go, everything is pretty standard. Gas, brake and handbrake are by default digital buttons on the right side of the screen, while steering left and right are digital buttons on the left. Controls can be customized though, allowing for tilt steering, tilt gas and brake, etc. It even allows you to move the digital button according to your preference. You can easily mix and match to find what is right for you. Overall the controls feel pretty natural, with the exception of some odd physics in certain situations. Occasionally you may find yourself positioned just perfectly on an incline, or in a body of water, at which point you may have to finagle with the controls a bit to get back on track. 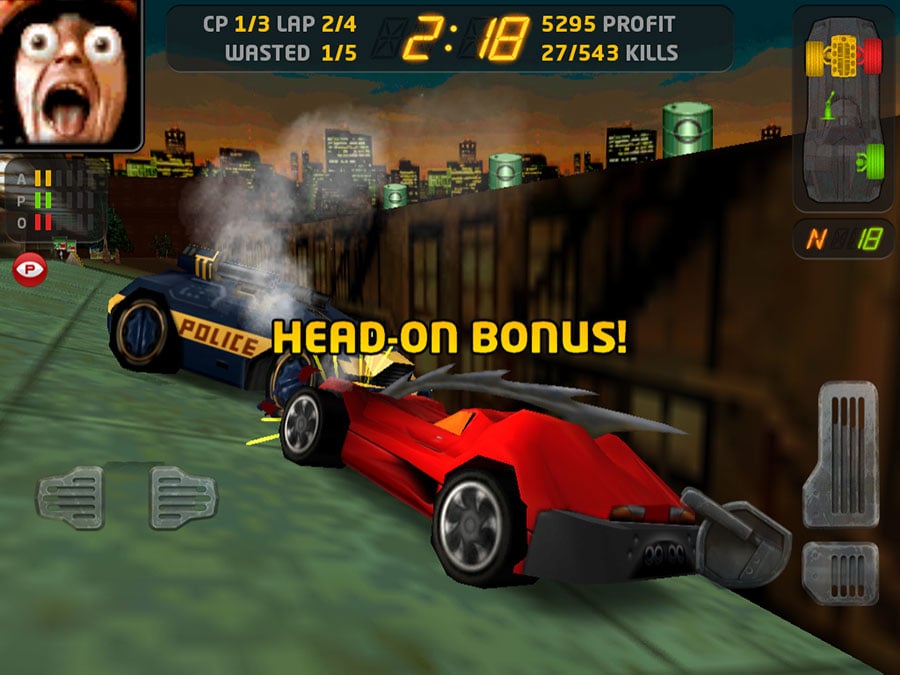 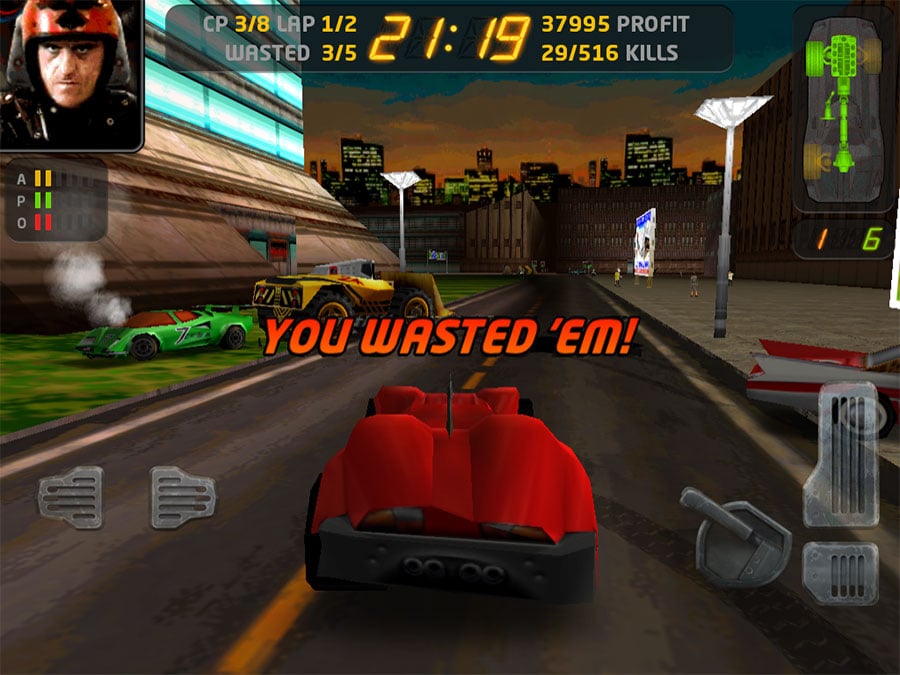 Each event has six contestants including yourself, giving the event a good amount of challenge while keeping it short enough to play in spurts on the go. Each opponent (28 total) has a unique vehicle with its own strengths and weaknesses, with opponents becoming stronger as you progress through the game. Each vehicle can be unlocked by destroying it in an event, as long as the vehicle is marked as steal-able. To steal a stronger vehicle, you must first unlock the weaker ones before it.

Hundreds of pedestrians are littered throughout each event. They make an entertaining distraction if they get in your way while trying to hunt down your opponents, but they also make for the most challenging way to beat an event. The game keeps up with whether you beat each event by racing, elimination, or pedestrian hunting. Perfectionists will likely want to complete all three goals on each event and trying to hunt down hundreds of pedestrians on each level is certainly a lofty goal.

Gameplay here is pretty unique for an Android game. Remember, the PC original has a rather large following, which is a testament to the quality of the game. Carmageddon is meant to satisfy that virtual urge to destroy cars, to turn around and drive the wrong way on the race track in order to hit a car head on, and to mow down bystanders. And it fulfills that urge. 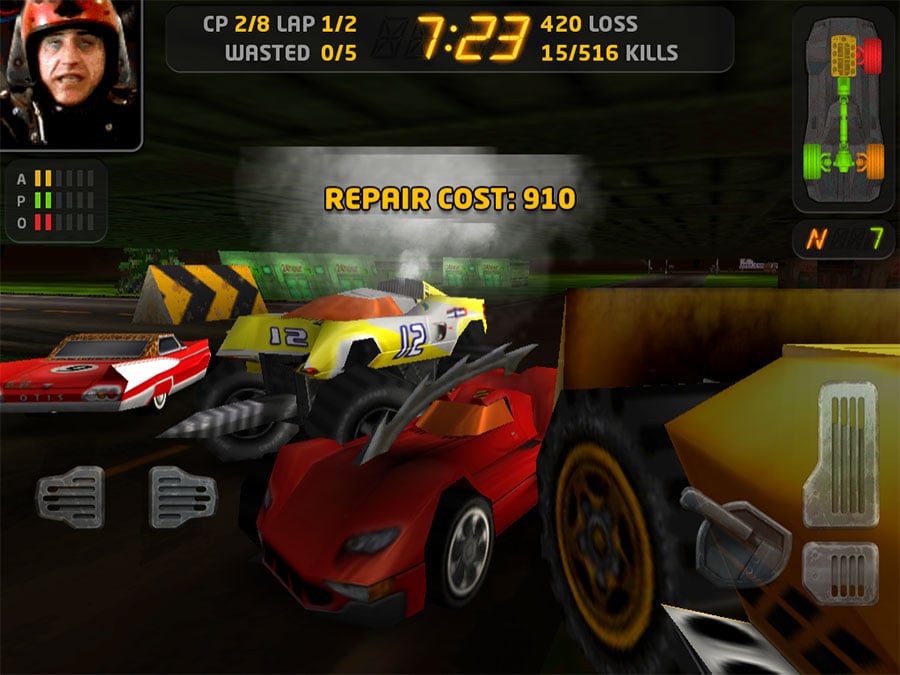 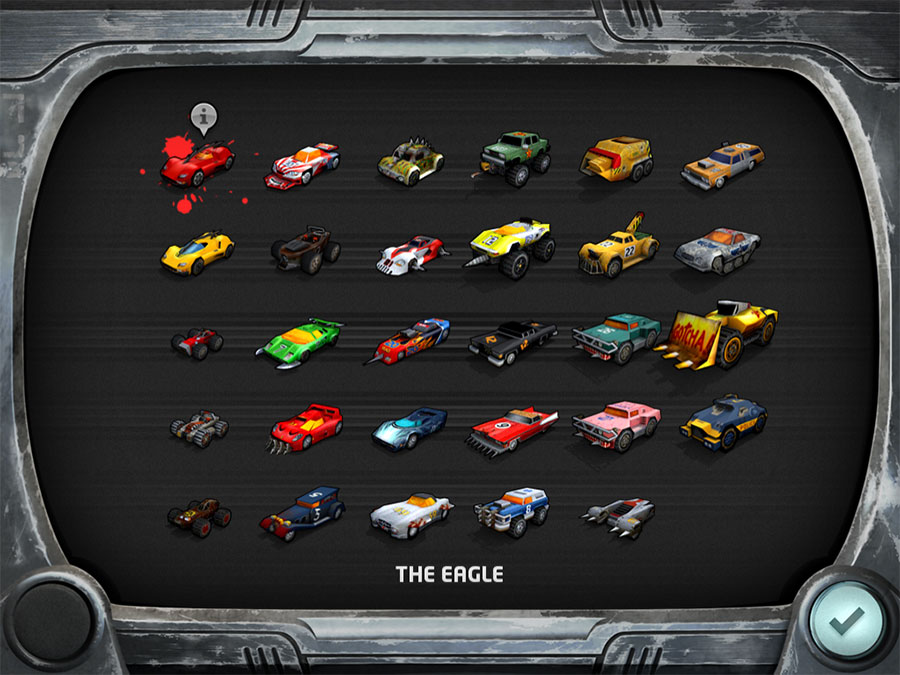 The graphics have held up surprisingly well for a game from 1997. However, one look at the textures of the game environments really confirm its age. The vehicles and pedestrians are fine though. Vehicle damage is pretty good; consistent enough to know that you are dealing damage to your opponents. The biggest annoyance for me was the driver cam in the upper-left corner, which shows the driver’s reactions of everything that’s happening. This got old very quickly, and thankfully there is an option to turn it off.

Audio in the game is fine but not great, if a little repetitive. Again, the driver mumbling in the driver cam is very annoying, but can be turned off. An instrumental metal soundtrack fits the carnage well, although you may need to adjust the game’s sound settings to enjoy it. Other sound effects of the car engine, crashes, announcer and pedestrians are all good.

Carmageddon is nostalgic for me, so I was absolutely thrilled to see it on the Android market. Objectively though, this is a 15-year-old game that some people have never heard of. Those who know about it probably downloaded the game as soon as they heard that it had been ported to Android. Those who haven’t owe it to themselves to give it a try. If you like classic vehicular combat games such as Vigilante 8, if you like racing games in general, or if you like a bit of gore in your racing games, go ahead and download the free version and give it a try. The free version is essentially a demo and offers one car and one event. I think you will find that Carmageddon fulfills a deep need to smash things that few games on Android satisfy.