EA has begun revealing details about the next installment into their FIFA series of games. Officially called FIFA 14, the game has had quite the overhaul apparently in terms of its development. For starters the controls have been reworked that are better suited for playing the game on touchscreen devices. Players will now be able to just touch the screen to select players, tap to pass and defend, swipe to shoot.

As with most FIFA titles, players will have a plethora of options when it comes to choosing teams, players and stadiums to play in. In total you will have 34 stadiums to choose from and playing with one of the over 600 teams from over 30 leagues. The game has also been translated into five languages which is a first for the series. When FIFA 14 launches it will be available in English, French, German, Italian and Spanish. 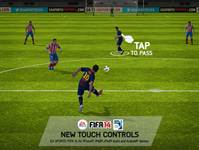 As for when FIFA 14 will land on Google Play, right now EA has a slated time of this Fall. Until then here are two incredible small screenshots for you to try and look at while you wait for the game.