While the GameCircle service was limited to games purchased through Amazon’s AppStore, you now don’t need to have an Amazon device in order to use it anymore nor do you have to use a game purchased through Amazon to access it. This is because Amazon has expanded the service so it can be used by any Android device. So if you have access to Amazon’s AppStore but own a non-Amazon branded device, you’re now able to use GameCircle. Don’t have access to Amazon games but want to use GameCircle, that is totally fine as well. 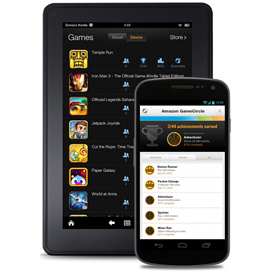 This move is pretty much a direct shot at their competition which is Google Play Games service. However, in the world of politics that happens between competitors, this would simply be labeled as the next logical step in expanding Amazon’s GameCircle service. The service has also been upgraded in order to pull this off with some new features which includes automatically resolving data conflicts between mobile devices and the cloud, queuing updates to support offline operation, and offering a simple interface that can be integrated in minutes.

Whether you submit your game to Amazon or Google, customers will benefit from the GameCircle experience. In addition, Whispersync has been dramatically improved. The result: Your customers’ game data will automatically sync across devices—even if they play your game while temporarily offline—and you can concentrate on using the data instead of persisting it. You’re not locked in, though; you retain ownership and can always get a copy of the data you store. – from the Amazon blog post

The SDK is available for anyone who wishes to integrate Amazon’s GameCircle service into their games and is free to download off the Amazon Developer site.