Like we briefly mentioned in our last post a few moments ago, Archos has made the GamePad 2 an official thing now which is about time since we got to play with an early prototype at CES 2013 and it was also basically outted thanks to an FCC filing back in August of this year. So what can you expect in terms of hardware for their second gen gaming tablet?

Stuffed into the 7″ GamePad 2 is a 1.6GHz quad-core A9 chipset which is paired up with a quad-core graphics processor, the Mali 400 GPU. To keep up with that there happens to be 2GB of RAM that comes along with this tablet. Visuals will be seen through the 7″ HD screen that will be running at 1280×800. There is also the usual front-facing camera that most tablets have as well. 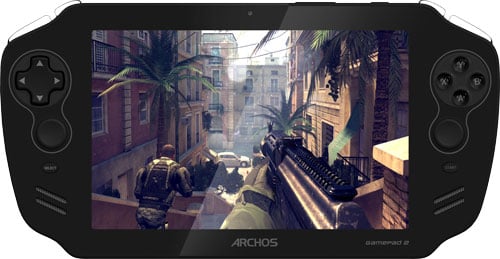 In terms of storage the GamePad 2 will have two models available – 8GB and a 16GB model. While this seems a bit small for this day and age you do have a MicroSD card slot for extra space. You also will have all the physical gaming controls you would expect to find built into this tablet and hopefully the thumb joysticks aren’t as resistant and stiff as they were when we tried it last. It does come with software that will let you map your physical gaming controls to how you want them which is a nice feature to have.

Lastly, the GamePad 2 will come with Android 4.2 out of the box along with Google Play anGamePad Game Zone installed as well. The Archos GamePad2 will begin to hit store shelves near the end of October and will run for around $245. You’ll also get those two free games from Gameloft when you pick one of these tablets up.