Black Friday is almost upon us (November 29th, 2013 for those of you who may have forgotten) and as always this means people are out hunting for all the best deals that they can find. When it comes to Android products, there’s a plethora of deals to be had not only on Black Friday but on Thanksgiving Thursday, Cyber Monday and over the weekend as well.

So like we try to do every year, we’ve collected as many of the Android related deals that we could find for this Black Friday. Some sales will begin on Thanksgiving Thursday as well and, of course, all of these items listed here are subject to the usual ‘while supplies last’ rule. Some of these may also be time limited offers and various other factors could apply as well such as in-store pick-up only. We’ve tried to make sure that all the important details are here so you’re as informed as we can possibly get you. That way you can just worry about getting the gear you want for the best prices.

We will be making a list for Cyber Monday in a separate post but don’t be surprised if some of these deals for Black Friday end up on that list as well. We’ve divided this up by retailer for better organization.

Nvidia is hosting a sale for what they are calling the ‘Ultimate Nvidia Shield Bundle’ this Black Friday. Right now details are unknown but what we have gathered from the landing page for this sale, the Nvidia Shield will be bundled with a hard case for the portable Android gaming system as well as something related to Batman. 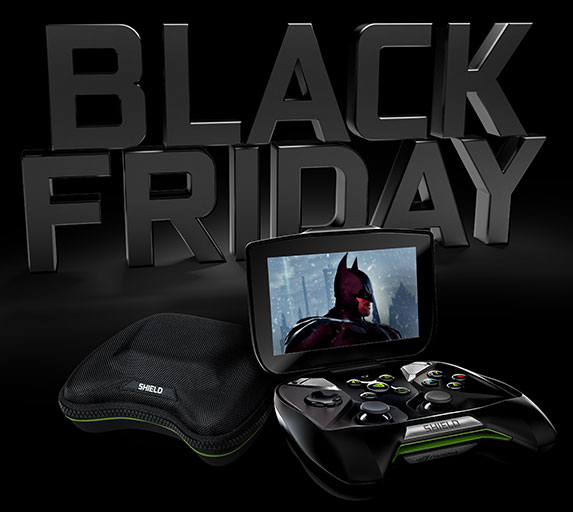 This sale starts at 9pm PST on November 29th, 2013 and will actually last the entire weekend, ending on December 2nd, 2013. The landing page will update at 9pm PST with details about the bundle. We will do the same here as well.

As everyone knows Amazon sells just about everything you could want and Black Friday, along with the weekend and Cyber Monday, usually has a lot of products on sale for rather steep discounts. While it would be almost impossible to list everything on sale over on Amazon during the next few days, we do suggest that you check out a few specific categories if you’re looking to score a good deal on Android devices and gaming gear.

– Samsung has a lot of their Galaxy Tab 3 tablets on sale this weekend starting right now. This includes both 7″ and 10.1″ sizes with at least $100 off each model. Other brands are also discounted a good amount.

– Almost all unlocked Android phones are currently on sale for this Black Friday weekend. Most brands are available such as Samsung, HTC, Sony and more.

Amazon will be announcing a slew of additional products on sale when Black Friday actually hits as well as Cyber Monday. We’ll try to keep up with a more specific list of the better deals available on Amazon over the next few days. You can also keep an eye on things for up-to-the-minute updates on new items going on sale over the next few days at Amazon’s official Black Friday hub.

Best Buy will actually be starting their yearly Dorrbuster Deals on Thanksgiving Thursday at 6pm which is great if you don’t actually have plans for eating Thanksgiving dinner with family and feel like battling the mob that will be there at your local Best Buy. You can preview most of the deal that will be available on Best Buy Black Friday/Doorbuster landing page.

However, here are some of the Android-based deals to look forward to that have been announced so far:

Of course you can dig through everything Best Buy has to offer through their Black Friday hub.

Where To Look For More Black Friday Deals Easily

This is obviously just a small list of retailers and products that will be on sale on Black Friday and over the weekend, some even starting on Thursday like Best Buy’s Doorbusters. You can pick up a pattern regarding some of the products and brands going on sale such as Samsung Galaxy Tabs all being discounted by at least $100 at most place. However, there’s plenty of retailers out there not covered here.

In order to better organize yourself, here are some sites and applications you can use to find even more deals this holiday weekend.

BlackFriday.com – One of the best sites to find Black Friday deals and flyers for just about every major retailers out there.

If you spot any deals that are amazing and haven’t been posted anywhere including here, definitely leave a comment down below with the product, price and link to it so everyone can take advantage of it. We’ll be getting our Cyber Monday deals list underway soon and should have that posted by Sunday unless we’ve eaten too much food.