If you take a look at Dungeon Keeper on Android you will find plenty of 4 and 5 star reviews for what should be a great game from Electronic Arts. Taking a look at all the ratings the game has, you would think it was the next best thing since sliced bread. However taking a little closer of a look at these ratings and how they have come about and you might think differently.

While the game is already getting a good beating by EA’s setup of in-app purchases where you can barely do anything without having to spend gems to speed things up. Literally, there isn’t much that is done in Dungeon Keeper that doesn’t offer up some sort of speed-up perk if you spend gems on it. Of course these aren’t mandatory purchases that you need to make but your gameplay almost slows to a crawl if you don’t at least take advantage of some of those perks.

To state something first, there is nothing wrong at all with offering up a free-to-play game if the IAPs are done right. This varies for each game but there is some common sense involved.

So EA has lathered the game with ‘optional’ IAPs, that isn’t really anything new although the extent of it is pretty impressive to say the least. Knowing the Android community and how outspoken it is, especially when confronted with a ‘free-to-play’ game wit a ridiculous amount of IAPs like this, it makes you wonder about all the positive ratings the game is getting. 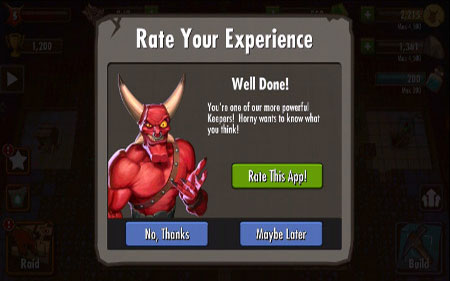 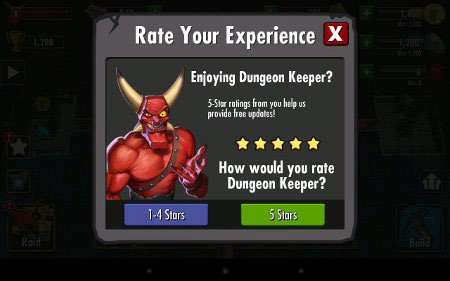 iOS rating screen on left, Android on the right

Some of these ratings are legit for sure. Some people enjoy the game even with the ridiculous amount of IAPs involved. However there is probably a good amount of those ratings being done by mistake or just to have the friendly reminder screen that will keep popping up to go away. In fact there is a big difference between the ‘rate me’ screen that iOS players see versus what Android gamers will encounter.

The iOS version just has your standard ‘Please Rate The Game’ screen pop up with the options for rating the app, asking to be reminded later, or telling EA to stop bugging you to rate the game. The Android version on the other hand gives you two options, rate the game between 1-4 stars or give it a 5-star rating. Clicking on the 5-star rating will take you to the game’s official listing where you can rate it whatever you want. Click the other button and you get invited to email EA with some advice on what they could do to get your 5 star rating.

Now granted you aren’t required to give the game a 5-star rating when you hit that button but there is a good chance a fair amount of people just end up giving the game 5-stars to stop the notifications or even by complete mistake. To have the game remind you later, you’ll have to do 2-steps: click the 1-4 star button then click ‘not now’ when asked to email EA. 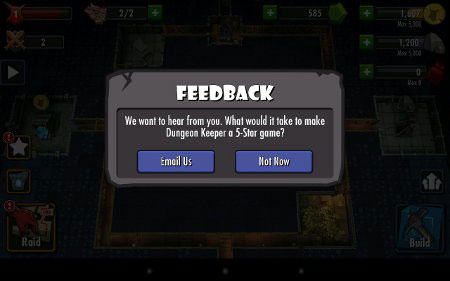 There is apparently no option to disable the pop-up window asking for ratings on Android altogether. According to EA Mythic’s Jeff Skalski who spoke to TabTimes, he defended this entire process by stating the following:

One of the important data points we’re looking at is our store ratings and downloads. At the time of this interview, App Store ratings currently sit at 4 out of 5 stars and Google Play ratings sit at 4.5 out of 5 stars.

The entire thing looks shady as hell, almost hindering people to leave high ratings for the game whether they want to or not by making it very difficult to get rid of the pop-ups without having to rate it. Top that off with the ridiculous IAPs and you’ve got a potentially great game pretty much ruined.

Websites Referenced: TabTimes (for the quote) | PocketGamer (for screenshots)