Everyone likes to try their hand at creating content for a game that they are playing and generally this only happens when you have a level generator or something similar available when the game is released. An upcoming roguelike game called #Dungeon that will let you generate levels for the game using Twitter as your level generating engine.

It is actually a pretty ingenious way to add social interaction to a game while offering up the ability to generate content while being interactive with the game on Twitter. Before we get into that though, a little about this game. As we mentioned, #Dungeon will be a roguelike game which means content will be randomly generated as you crawl through the dungeons with each gameplay session. The game itself looks like it was influenced by another game called Binding of Isaac which we are sure a few of you have heard of or played. 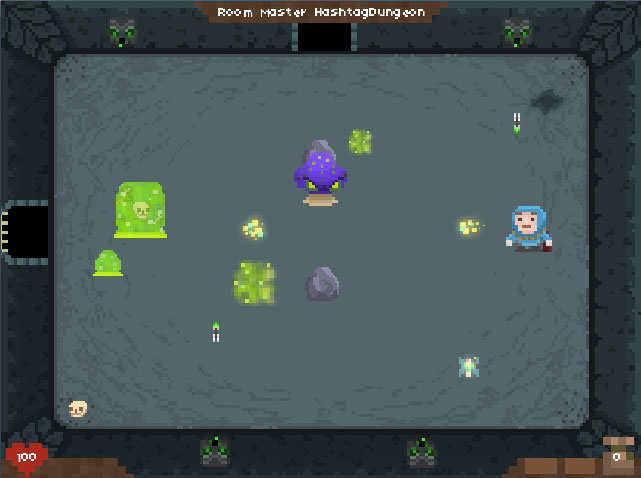 In fact the game plays out a lot like Binding of Isaac except for the fact that you’ll be able to contribute to the game using Twitter. So here is how this will work. There is an official Twitter account tied to the game and from this account the developers can tweet out coding that will be then used by the game to generate new content. Players who know a bit of coding can do the same by attaching #HashtagDungeon to the end of their tweet when tweeting this account.

There are a couple other social elements to the game as well, like being able to leave messages on the floor that other players can see to provide hints or maybe grief fellow players. There is also a basic room rating system with a leader board for the top rated designers. – Kieran Hicks, #Dungeon developer

The coding in the tweet will determine the content that appears in each dungeon. This allows for the generation of unlimited content as long as the developer and players tweet coding to the official Twitter account for the game to use. It’s pretty ingenious. As for the game’s release, #Dungeon will be arriving on to mobile and PC later this Summer.