Alright, we don’t post anything about iPhone or iOS generally at all, mainly because we are an Android gaming news website. So if we are posting something related to an iPhone, although the game Flappy Bird itself was on Android, you know it has to be a pretty decent WTF moment.

With that said, apparently the hysteria around Flappy Bird reached a new level when someone put an iPhone 5 up on eBay for sale with the game installed on it. Now that in itself isn’t a big deal, but what is a pretty big WTF is that it sold for $94,000. Sure there have been crazier things that have happened on eBay but $94,000 for an iPhone with a free game on it is pretty insane. 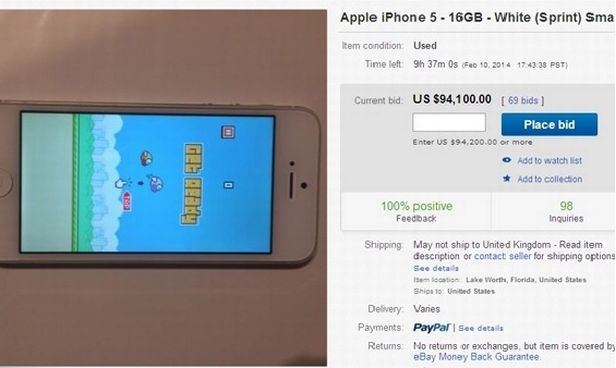 It does get even more interesting with the fact that shortly after it sold the listing was taken down off of eBay. This happened right before the purchase was confirmed as having gone through. The current rumor is that eBay took it down due to the listing broke some of the rules eBay has for posting listings. This isn’t confirmed at all though, only a rumor.

Doing a quick search has yielded even weirder auctions going on related to Flappy Bird including a pencil drawing from an 8 year old with a $1,000 bid on it. There are also a couple of Galaxy Note 3 phones on there, one with a buy-it-now price of $3,400. In fact there are plenty of Android devices on there with the game installed for sale.

What a strange world we live in sometimes.