Swordigo Review: The Return of the Platformer is Finally Here

With devices nowadays becoming more and more powerful, good platformer games are harder to come by. Platformer games in the mobile segment often offer too little to get gamers hooked. It is understandable as fully-rendered 3D adventure games often offer more customization and content altogether thus increasing expectations, even for 2D platformers. Swordigo is a mobile platformer that does not fall into the same pit that most games of this genre do. The guys over at Touch Foo outdid themselves on this one as Swordigo follows the side-scrolling genre while implementing the same elements of surprise and puzzle solving reminiscent of classic platformers like the Mega Man and Tomba! series.

The beauty of this game lies on many facets and one of them is the simplicity of the controls. Players are presented with touch screen buttons for moving, jumping, attacking, and using an equipped power– all of which can be rearranged. The in-game menu can be accessed by the pressing the upper left hand side of the screen while the upper right hand side is for the power switcher. Turning from one direction to the other is not an issue in this game, but there are times when the accuracy of jumps can be a little frustrating. 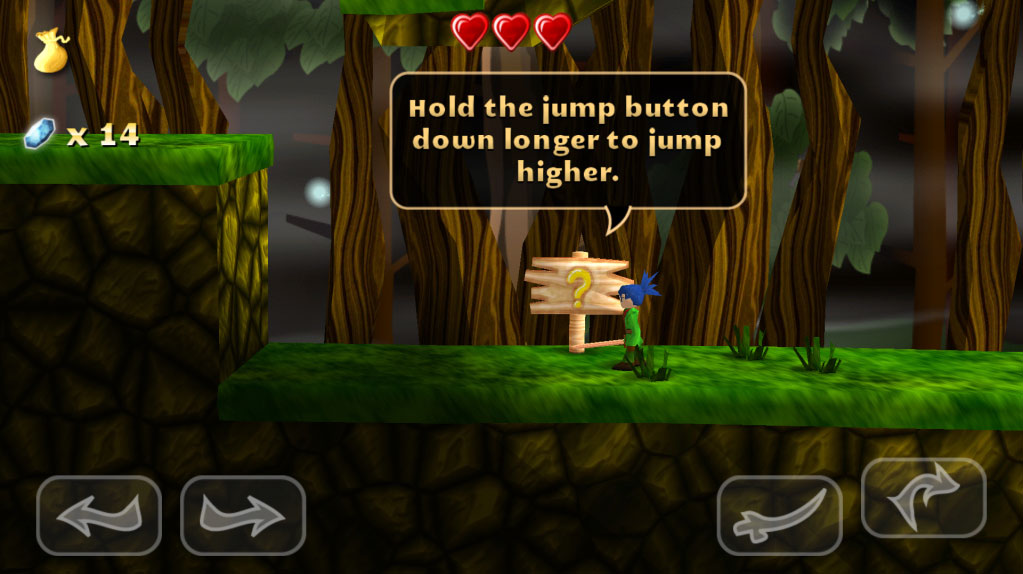 Initially, Swordigo felt like a regular side-scroller in which players hack across a multitude of monsters and make their way through the different areas, hopping about from platform to platform. However, the game becomes increasingly difficult as the diversity and the level of the monsters you are pitted up against picks up. The game will also have players exploring areas more than once as alternate paths are present in almost every stage of the game. There are also areas that players have to come back to as these will only be accessible after obtaining certain powers.

Deeper in the game, players will be forced to navigate through puzzle obstacles and challenges in order to proceed to the next area. These various puzzles add to the allure and challenge of Swordigo and ultimately remove the boredom and repetitive feeling of the genre. 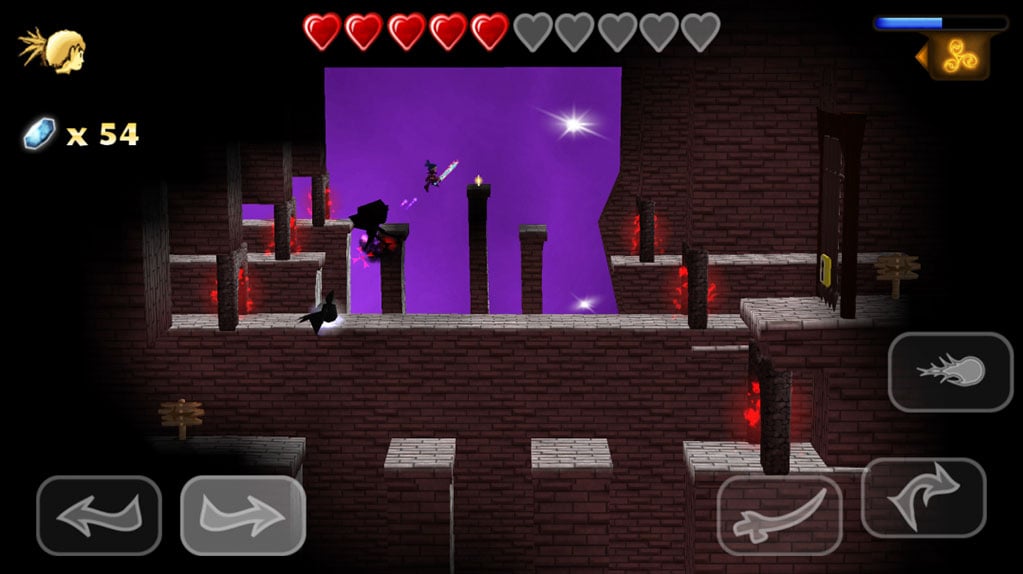 A good addition to Swordigo’s gameplay that is not available in most mobile side-scrollers is the ability to purchase weapons, armor, and enchantments meant to bolster the player’s equipment. The game also offers in-app purchases for 2 items: a coin doubler and a compass (trust me, you can lose your way in the game despite it being a side-scroller), both of which are not really necessary to finish the game. Additionally, some weapons can be found as treasures in hidden areas throughout the game.

If there is any room for improvement in this category, it would be the lack of combos when attacking with the sword. It is quite difficult to fend off bats especially when they come in bunches (there are a lot of these critters) as attacking while airborne feels quite limited. It would have been better to have an upward thrusting attack and a downward attack when coming from a jump.

Swordigo is a 3D rendered side scroller with almost kiddie graphics (especially the monsters) during the start of the game. As the plot darkens, the look and feel of both the monsters and areas change. The game makes good use of foreground and background elements enhancing the 3D feel. At times, there would even be 2 to 3 layers of background platforms, all of which can be accessed by the player. 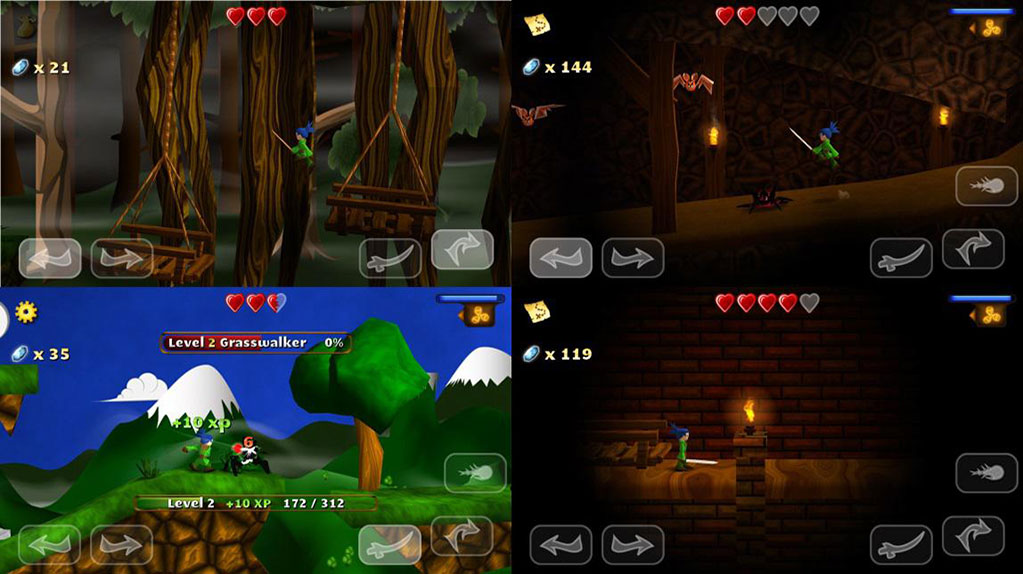 A very distinct characteristic of Swordigo is the use of dynamic lighting in the different stages. Swordigo features a diverse selection of stages and the dynamic lighting gives these levels a more complete feel, whether it is a dark dungeon or an open plain in a high area. This makes otherwise simplistic graphics more alive and suited for the different parts of the story. The game also makes use of various camera zooming and angles to contain important information in single frame. For example, if a large obstacle or puzzle presents itself before the player, the camera will zoom out automatically in order for the player to see the whole area and plan accordingly. This is definitely a very handy feature for platformers.

The game uses repetitive sound effects much like any platformer. However, it also utilizes simple, yet well-composed scores that deepen the feel of the levels and the different situations throughout the story. This (along with the dynamic lighting) helps transform Swordigo from what initially is a light and simple game to a deeper, darker, and more complete game towards the middle and the end.

Swordigo redefines what a platformer in the mobile device segment should be like. The various challenges and alternate paths keep players engaged and balance the repetitive elements of games in this genre. It offers a long playing experience almost unimaginably cramped into a 47MB file and a lasting impression that leaves one asking, “Why haven’t I played this before?”

– Gameplay: 4/5 [The diversity of the levels, monsters, and puzzle-challenges will keep youplaying despite doing the same thing, which is beating up the bad guys and exploring areas. The game utilizes the platformer/side-scrolling genre very well.]
– Graphics: 4.5/5 [The dynamic lighting combined with automatic camera zooms and angles provide a deeper feel to every situation and level in the game.]
– Controls: 4/5 [Simple controls will last you throughout the game making it easy to pick this game up and play.]
– Sound: 4.5/5 [Well-made scores distinct for every stage complete the feel of dungeons, forests, castles, caves, and other areas.]
– Overall: 4.5/5 [A mobile platformer worth playing, Swordigo will have you exploring,hacking, jumping, and slashing your way to defeat the evil forces. It will have you occupied for a good 5-8 hours total.]