What do you call a man with a spade on his head? The genre of mining or maze building has been popular since the classic Dig Dug was released by Namco in Japan, and Atari Inc in the West. There have been numerous popular remakes of the formula including countless flash games, the widely popular Motherload, a personal favorite of mine Gem Miner for android, and even something like Terraria has arguably just subverted the old formula.

Doug Dug is a new title from The Electric Toy Company that aims to reinvigorate the genre with a direct nod to Namco’s 1982 classic Dig Dug. The name alone evokes Namco’s title, whilst the graphics look like a mash up of retro pixelated goodness with some tell tale whiffs of Minecraft come Terraria. The new release will have you swiping around, avoiding the dirt above you, hungry for the chests and ores below. 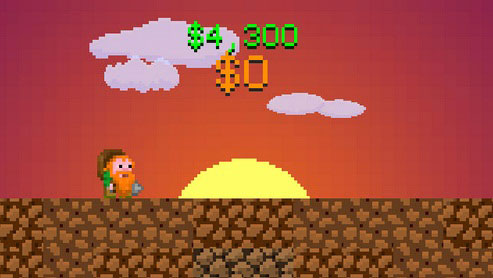 The humor of the game looks great, complimenting the pixelated graphics and satisfyingly casual atmosphere. Players are greeted with: ‘This is Doug, Doug the dwarf. Doug wanted treasure. So Doug Dug. And he dug and he dug… Deep into the heart of the Earth. And this is what he found…’ when they open the game, and ‘congratulations, you have reached a new low’ whenever you dig further than before.

There looks to be plenty of action here from: dougging (hehe), opening chests, finding ore, upgrading your equipment, laying explosives, killing spiders, and even some sort of aardvark looking thing and lava.

Doug Dug is currently out for iOS at £0.69. PocketGamer assures us it will be landing on the Play store soon. Whenever that means. The reviews for the game look promising, the majority coming in at 5 stars on the iTunes store. Oh, and did I mention? No IAP. Good work ya little bearded dwarf.

However, if you can’t wait and your thumbs are itching for some immediate mining action I highly recommend Psym Mobile’s Gem Miner 2, link below. You can also check out the Doug Dug above trailer to see the game in action.