Humble’s big 14 day long spring sale is now over, so it’s time to get back to the usual bundle series. This time we have their Humble Bundle for PC and Android 10 available, with some pretty sweet games on it.

As usual, the “PC and Android” bundle series includes 3 games for whatever price you chose, followed by 4 games available for all who beat the average price at the time of purchase, and (usually) 3 more mystery games which are revealed at the start of the second week and available for everyone that paid more than the average price. All games are multi-platform (PC, Linux, Mac and Android) and DRM-free, with soundtracks included. This makes Humble’s bundles generally a ridiculously good deal especially for us Android users. So let’s have a look what they bring us this time.

For any price you put on the bundle, you’ll get:

and for those who beat the average price:

I would put this among one of their best PC and Android bundles on release so far if not THE best, seeing the amount of awesome games on it. For me in particular, the highlights are Symphony in the basic pack, Metal Slug 3 in the beat-the-average pack. Since everyone has a different taste though, I’ll throw in a quick description of each of the games, so you can get an idea what they are. 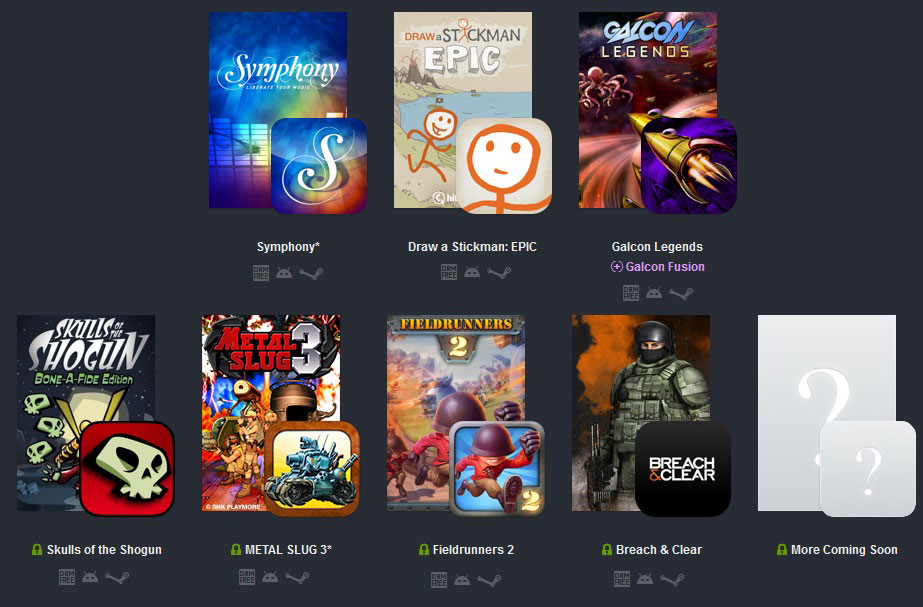 Draw a Stickman: EPIC – this is a really weird one to explain. I’d say it’s an adventure game, where you actually have to draw things to progress, for example, you can draw an axe for your character to cut down a tree with, or rain clouds to put out a fire. I haven’t tried it myself yet, but it definitely got my attention from the previews I saw.

Galcon Legends / Fusion – this one is a space strategy…-like. The idea is that you have a planet that builds-up space-ships, which you send to other planets to take them over, which will provide even more ships to take over more planets, with the objective to take over everything with mass-assaults. While I haven’t played this game, I’ve played similar ones and I really enjoyed them so I expect this one to be really fun. The “Fusion” version is pretty much the same game, except a multiplayer-variant so you can have those epic battles with your friends.

Symphony – simply put, this is a rhythm-based shooter, similar to Beat Hazard. The game works by taking music you have on your device (or the one that comes with the game) and generating levels and enemy patterns from it, making each song its own unique level. There are also unlocks and ship customization as you progress through the game. I played this one a lot on PC and I can safely say it’s a game most people will enjoy.

Breach and Clear – this one is a turn-based tactical shooter. You pick a squad, customize it and take on missions. The main mechanic is picking entry points and paths which your squad will follow, including which way to face and how to move there and any item-use you want. The way you enter and where you enter in a room in particular is key to winning missions, since entering facing left, while the enemy is actually to the right will most likely end up with more casualties than necessary. This one I played a while back on my phone and enjoyed it a lot, however I would recommend playing it on a tablet if possible.

Frieldrunners 2 – one of the leading tower-defense games. This one is really fun, especially if you like TD games. The visuals are very well made, nice, clean and colorful, making sure you don’t struggle to see what’s going on. One thing I personally like about it is that most of the time you have free-tower-placement instead of pre-defined spots like how most games do it, so you can build your own maze and creep paths, giving you much more freedom for strategic thinking. While I wouldn’t call it better than Kingdom Rush (each has its unique charm), it’s definitely a must-try TD game.

Metal Slug 3 – this is a 2D sidescroller shooter and one of the best in that category. The Metal Slug series is well known for over-the-top action with highly detailed sprite-based graphics, accompanied by fantastic music. Unlike other games that are just mediocre ports, SNK Playmore completely re-did the game adding visual options and Bluetooth multiplayer, instead of just wrapping it in an emulator-app. It’s a game I highly recommend.

Skulls of the Shogun – a pretty nice turn-based tactics game. This is one that deserves its own review since there are a lot of things to be said about it. In short – you start with a few units to fight an enemy group, you move around, haunt rise-fields to get rise, which will allow you to spawn more units at shrines, defeat your enemies and eat the skulls they drop so you can regenerate health and become a demon (for extra killing power). It’s not a complex game by any stretch of the imagination, but it definitely looks pretty fun, much like Hero Academy.

At the time I’m writing this, the average price for the bundle is $4.87. Should you get it? Yes, without question. All the games are high-quality and all sorts of fun, so there’s no reason you should miss out on it if you have $5 and you’re looking for a good purchase.

You can check out the video trailers and buy the bundle over at the Humble Bundle website: https://www.humblebundle.com/

We will keep you updated on the bonus games once they’re added.