Dark Lands Review: Runner or Action-adventure? Why Not Both?

Dark Lands is a hybrid game containing elements of an endless runner and an action-adventure game, complete with endless running evasion tactics and a full combat system for dealing with those pesky enemies blocking the player’s way. Released earlier this May, Bulkypix’s Dark Lands packs a long playing experience into 2 content-filled game modes. Without question, its crossbreed characteristics will turn some heads but how does this marriage of an action-adventure x endless runner x platformer really play out?

It’s quite difficult to find a game with the exact same mechanics as this one because of its hybrid nature. If you’re familiar with Vector, it is probably the game that comes closest to what Dark Lands offers – minus the combat of course. Dark Lands is still primarily a 2D endless runner which shifts to a more action-adventure approach when there are monstrosities in the immediate vicinity of the player. The character automatically stops his running and prepares for a confrontation with the enemy right in front of him. This does not stop the other enemies from mounting attacks on the player though. Luckily, the monsters’ attacks are limited to melee and simple projectiles only – all of which require only timing to counteract. In these situations, the character can only either defend himself with his weapon or attack. In a way, engaging with these fiends may feel like a mini-game to the player’s endless running. 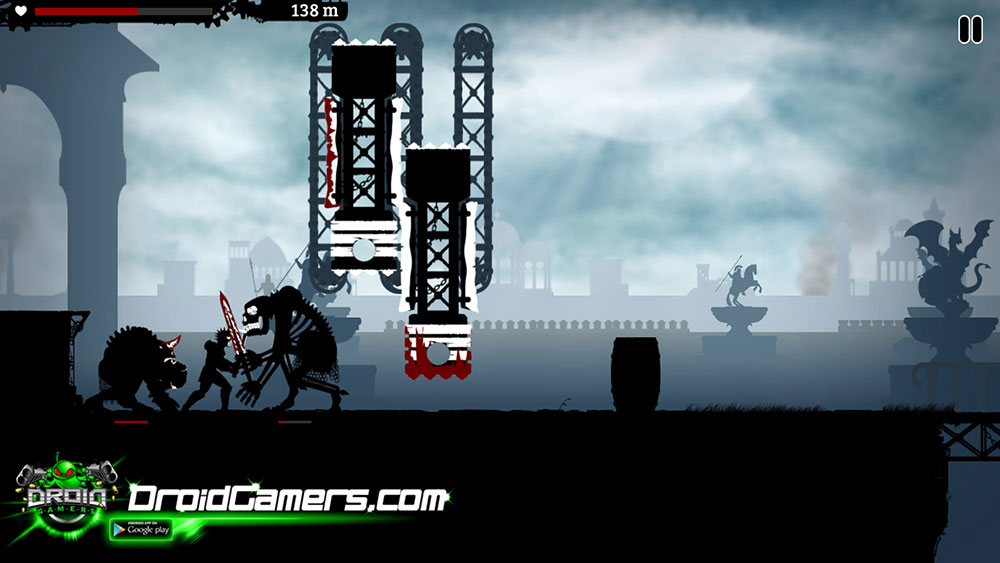 The players however, cannot go back or explore areas like a pure adventure game. Unlike like traditional runners, the game introduces a life bar system which eliminates the “one hit-game over” experience in more traditional runners. Further strengthening its action-adventure side is the presence of multiple bosses and the changing of stages. The presence of traps and other hazards which necessitate a hefty amount of jumping and sliding are of course still present. Players are also able to upgrade their characters base stats (health, damage, agility) as well as upgrade equipment such as head/chest/arm/leg armor and offensive armaments.

An amusing feature of the game is the fact that the environment is not only there to burden the player alone. Traps and other obstacles can be used against opponents when positioned and timed well. At the same time however, bad timing and carelessness can sometimes have the players choosing between Scylla and Charybdis because of the deadly combination of trap placements and enemies.

The controls are simple with this game being more of a runner. Dark Lands uses the traditional swipe up to jump (twice to double jump), swipe down to slide controls. However, the developers also added an option to stop running in order to survey the area for a while which can be done by holding down one finger each on the right and left sides of the screen. The same is done for defending. Instead of just halting, the character automatically defends using his sword when the same controls are used in the presence of an opponent. Attacking is done by tapping with one finger. 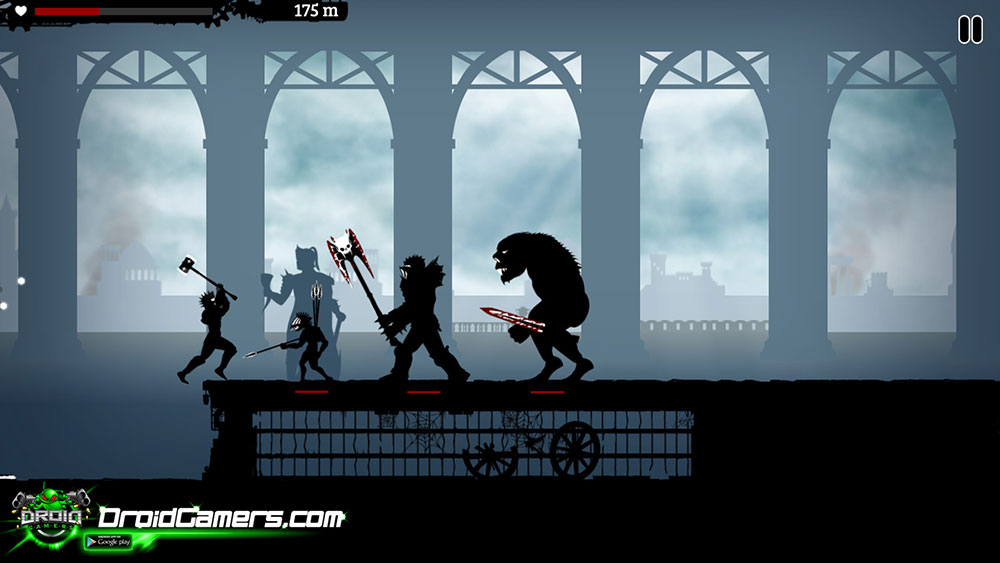 My gripe with these controls comes in twofold: 1) Inconsistency of jumps, and 2) Problems with defending. There are instances when my character can do triple jumps and while this is amazing, the inconsistency of when I could do triple jump or just the usual double jump makes it a hit or a miss. Sometimes my character may wind up in a surprisingly favorable situation but at times he could end up in peril. Defending can be a problem when the screen is pressed prematurely in anticipation of an attack. If the distance between the character and the opponent is not closed, the character will only stop and will not use his sword to defend. This can be a nuisance against bigger opponents with longer weapons. Thankfully, it’s not all that bad because the character can defend against projectiles flawlessly.

Dark Lands features simplistic, flat graphics that fit right with the minimalistic trend nowadays. The game is comprised of mostly silhouettes and a few polishing details to weapons, traps, and the environment in general. The game also features rich backgrounds that change upon the defeat of a boss. Although these backgrounds differ in color and design, they all project the same eerie, melancholic, shadowy ambiance of Dark Lands. A good point to remember is that because of the minimalism in the design, it is very possible for new players to have a bit of struggle in discerning which of the objects in the setting are safe and which can harm the character. This is just a small problem as players would soon understand and adapt to the game since the learning curve isn’t all that steep. 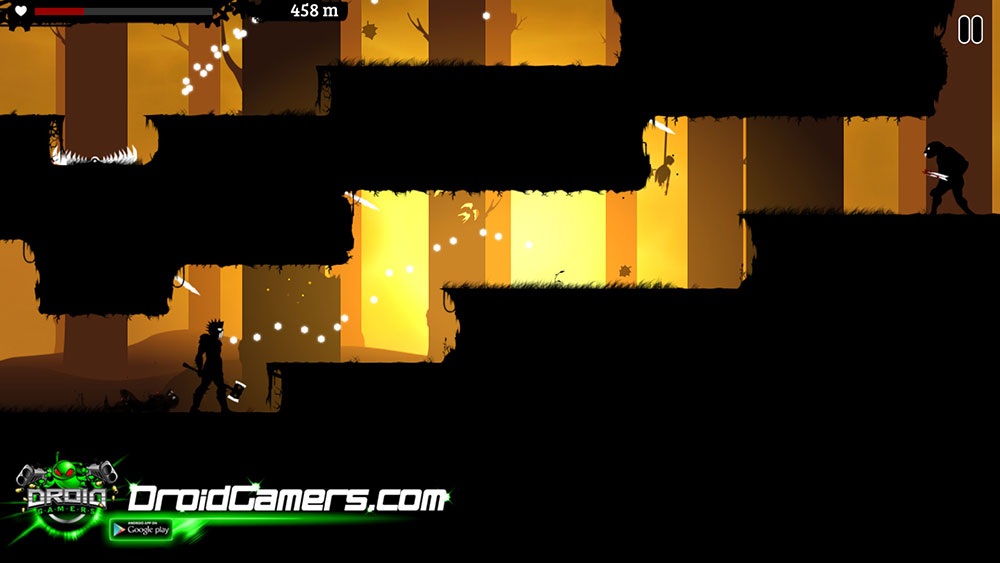 The in-game sound effects are repetitive as anyone would expect from a runner or an action-adventure but the background music is a different story. There are multiple scores which play at random, and all are well-fitted into the atmosphere and vibe that the game aims to establish. Melancholic, gloomy, dim, and unforsaken are just some of the words that may pop into mind upon focusing on the game’s soundtracks. This, coupled with how the game was graphically designed, emphasizes the desolation of the areas and the struggles of the character.

Whether one wants to call Dark Lands an endless runner or an action-adventure game, one thing is for sure. This is a hybrid game with enough elements from the genres mentioned above to excite and keep the players entertained. Its gameplay brings a refreshing adjustment of pace to runners and adventure games alike without straying away from the basics of these genres that we’ve all come to love.

GAMEPLAY: 4/5 – A change to the usual endless runners, Dark Lands brings a refreshing experience with a decent amount of content.
CONTROLS: 3/5 – Does its job but has a few quirks here and there.
GRAPHICS: 4/5 – Simplistic but accomplishes its aim of bringing a dark feel
SOUND: 4/5 – Compliments the graphics well and ultimately completes the atmosphere of the game.
OVERALL: 4/5 – Dark Lands is still more of a runner but with the new things it innovatively introduces into its gameplay, it would be difficult to pass on this one.