Apple has a long history of antagonizing its competitors, be it the award winning “1984” Super Bowl commercial which depicts IBM as a totalitarian menace, the “Toasted” ad which ridicules Intel processors for being too slow, or the long running “Get a Mac” ad campaign which pit a svelt and witty Justin Long (“Mac”) against a frumpy and stodgy John Hodgman (“PC”). Given the aforementioned legacy, no one should be surprised when Apple takes jabs at Google and its Android operating system. What is surprising is watching Tim Cook get on stage at WWDC (World Wide Developers Conference) to spread misinformation.

Update: June 6th, 2014 9:08am PST: A June 4th report issued by Google confirms that all versions of Android 4.X account for 84.3% of current Android installs. Furthermore, the distribution data reveals that 58.4% of Android users are running Jelly Bean (Android 4.1-4.3), a recent version of Android.(see image below)

There is a marked difference between satirizing a competitor, and the outright manipulation of facts in order to mislead an audience. The issue at hand is far greater than OS market share or fragmentation. The WWDC fiasco boils down to a lack of integrity and professionalism. I respect Mr. Cook’s leadership abilities and business acumen, but I do not support the skewing of facts.

– The Facts: iOS 7 includes nine iterations between 7.0 and 7.1.1. Based on Mr. Cook’s chart, he seems to be comparing all versions of iOS 7.X against a single version of Android 4.X. A January report issued by Google confirms that all versions of Android 4.X account for 77.4% of current Android installs.

Furthermore, the distribution data reveals that 59.1% of Android users are running Jelly Bean (Android 4.1-4.3), a recent version of Android. In sum, usage of Android version 4 is comparable to usage of iOS version 7. iOS still leads update adoption by 12%, but such a discrepancy is far less pronounced than the gap Cook attempts to portray. Even if Tim Cook is implying that 89% of users are running iOS 7.1.1, his comparison still rings false once my next point is taken into consideration.

– The Claim: Tim cook asserts that, “less than 1 out of 10 of their customers are on their latest versions.” Cook further adds, “that means these customers are not getting great new features. They’re not able to run the latest apps[…]”.

– The Facts: Most current games and apps require Android 4.0, including recent titles such as Dragon Quest VIII. Unity Game’s recently released ARPG, Archangel, will even run on Android 2.3.3. Since 77% of all Android users are running some version of 4.X, running current apps is mostly a non-issue.

Then there is the claim about “missing out” on features. Sure, numerically speaking, most iOS users are running the latest version of iOS. However, the user experience, in terms of features, can be worlds apart for iOS users running “old” hardware with the “same” version of iOS as every other user.

When Siri was introduced in iOS 5, iPhone 4 and iPad 2 users would quickly learn that even though they could update their device to iOS 5, there was no inclusion of Siri. Only users with Apple’s then latest device, the iPhone 4s, could use Siri. Mind you, the iPhone 4 launched in 2010, while iOS 5, Siri and the iPhone 4s all debuted in 2011.

The real kicker is that the first generation iPad Mini, a device running a similarly speced SoC (System On  Chip) as the iPad 2, does include Siri functionality. In other words, there is no real hardware limitation preventing Siri from running on the iPad 2. Apple simply elected to intentionally downgrade iOS 5 on their previous devices in the hopes of coercing users into upgrading to newer devices.

iOS fragmentation is a real thing and is perhaps one of the best known examples of planned obsolescence. In fact, it isn’t uncommon to see feature compatibility charts pop up online after Apple releases a new version number of iOS. Ultimately, even if a user is running the latest version of iOS, it does not mean that they will be able to take advantage of every new feature. Below, you can see a compatibility chart for iOS 7 and which devices have missing features. 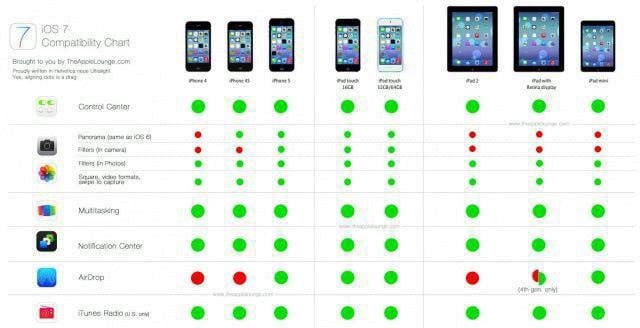 Though no iOS 8 feature chart is available at the moment, Apple did announce that the iPhone 4 is being skipped entirely. Meanwhile, the original Galaxy S, an Android phone of similar age as the iPhone 4, can run Android 4.4 thanks to a recent update from Cyanogenmod.

The Facts: Tim Cook cites a well known statistic from a Cisco report: 99% of all known mobile malware targets Android. Mr. Cook even had another pie chart slide on hand to illustrate his point. But, as Samuel Clemens was known to say, “there are three kinds of lies: lies, damned lies and statistics.” 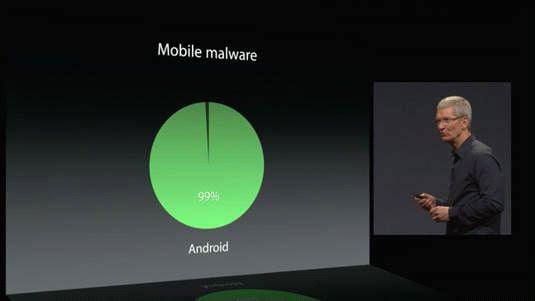 So what is the issue? Mr. Cook follows up with a decontextualized quote from a ZDNet article. 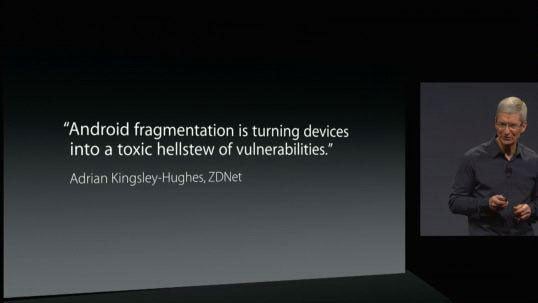 Adrian Kingsley-Hughes is a respected technology author, computer programmer and tech columnist, so if anyone has the qualifications to opine about technology, Kingsley-Hughes is a top candidate. However, there are individuals with credentials of greater relevance and deeper insight on matters of Android security.

Symantec, the Internet security firm responsible for Norton Antivirus, has reported information that is a bit more telling than the blurb and statistic referenced by Mr. Cook. In fact, Mr. Cook neglects to mention the findings of this report altogether.

Android may be the target of more malware, but that comes down to pragmatism. Android has a far larger marketshare and is therefore more valuable as a target for thieves looking to mine identity data and/or steal money. On the other hand, Google is clearly no slouch in platform security as evinced by Symantec’s findings.

If Cook is truly interested in conveying the benefits of iOS, he would not have to dig deep for proper examples. Even though Android has a commanding lead in marketshare and activations, the majority of app revenue is still generated on iOS. What better way is there to entice developers to create software for Apple’s platform than to remind developers that most of the spending is happening in Apple’s ecoystem?

Although Google’s Play Store offers an extensive library of apps, Apple’s App Store still has the greater volume of apps and far more exclusive content such as Paper, Street Fighter x Tekken and Infinity Blade. What better way to draw in consumers than to highlight this advantage? Afterall, it isn’t as if consumers are lining up to shun an abundance of software options.

For reasons unknown, Tim Cook decided to forego the above considerations and instead took the stage and leveled a series of incomplete and erronious accusations. Baffling would not even begin to describe such decision making.

When objectivity better serves one’s goals, why resort to manipulation and deceit by omission? I understand that Apple is engaged in an all-out-war with Google, including a proxy battle via courtroom antics with Samsung, but does conflict require Mr. Cook to engage in such a publicly flamboyant display of unprofessional conduct?

I only hope that Google takes the high road at I/O later this month, lest I find myself having to write a second debunking article.