Samsung and Barnes & Noble Team Up For Co-Branded Nook Tablet

On Thursday, in an impressive effort to bolster consumer interest in its well received Nook line of tablet computers, Barnes & Noble Inc. has announced a partnership with Samsung Electronics Co. to release a co-branded Nook tablet. The upcoming device will be a re-purposed Samsung Galaxy Tab 4, called the Galaxy Tab 4 Nook. The co-branded tablet is expected to launch in August, with Nook software pre-installed on the device.

On the matter of whether or not the Galaxy Tab 4 Nook will run on the stock configuration of the existing Galaxy Tab 4, Ms. Keating clarified that the upcoming Nook “will be a custom device.” Sadly, Ms. Keating was not at liberty to discuss the extent of the modifications. When asked about the product launch window and pricing, Ms. Keating replied that, “the new Nook will be launched in August. At that time, we’ll announce more details about the hardware and the exact launch date.” 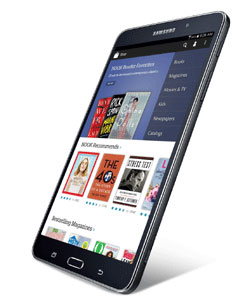 The current Galaxy Tab 4 sells for $199 and features the following technical specifications:

Barnes & Noble’s Nook line is known for its remarkably aggressive pricing and compelling hardware. The latest entry in the Nook series, the Nook HD+, sells for an unbelievably low $179, powered by the TI OMAP 4470 (comparable to the Snapdragon S4 Pro) and the Power VR SGX544, the same series of GPU that powers the Samsung Galaxy S4. The expectations for the Tab 4 Nook are high, but only because Barnes & Noble has set a precedent upon which it is likely to deliver.

Partnering with Samsung marks Barnes & Noble’s third Nook related venture with a tech firm. In 2012, Microsoft became an investor in the Nook brand, contributing some $300 million and taking an 18% stake in the brand. 2013 followed with Barnes & Noble courting Google to add the Play Store to the Nook HD and Nook HD+. 2014 will see Samsung taking over hardware development duties from Barnes & Noble.

The latter development will improve Barnes & Noble’s financial position, as contracting with a third party will free Barnes & Noble from the burden of investing in R&D and hardware production. As noted in the press release:

Working with Samsung on co-branded tablets will allow the Company to reduce its exposure to the substantial cost structure and other financial commitments that accompany ownership of the hardware production aspects of the NOOK tablet business. Going forward, the Company will be able to focus on its proven expertise in acquiring and delivering the best digital reading experience to grow NOOK content sales.

With a rather front loaded first half of 2014, it is definitely exciting news to have a new hardware launch to look forward to this coming August. We’ll be sure to follow this story closely to keep you all up to date on the latest developments for the new Galaxy Tab 4 Nook.