Before even getting into the shadowing or the fighting, my ninja senses were immediate alerted after spying the obtuse amount of permissions the “free” title required. I shrugged it off and hoped for the best. 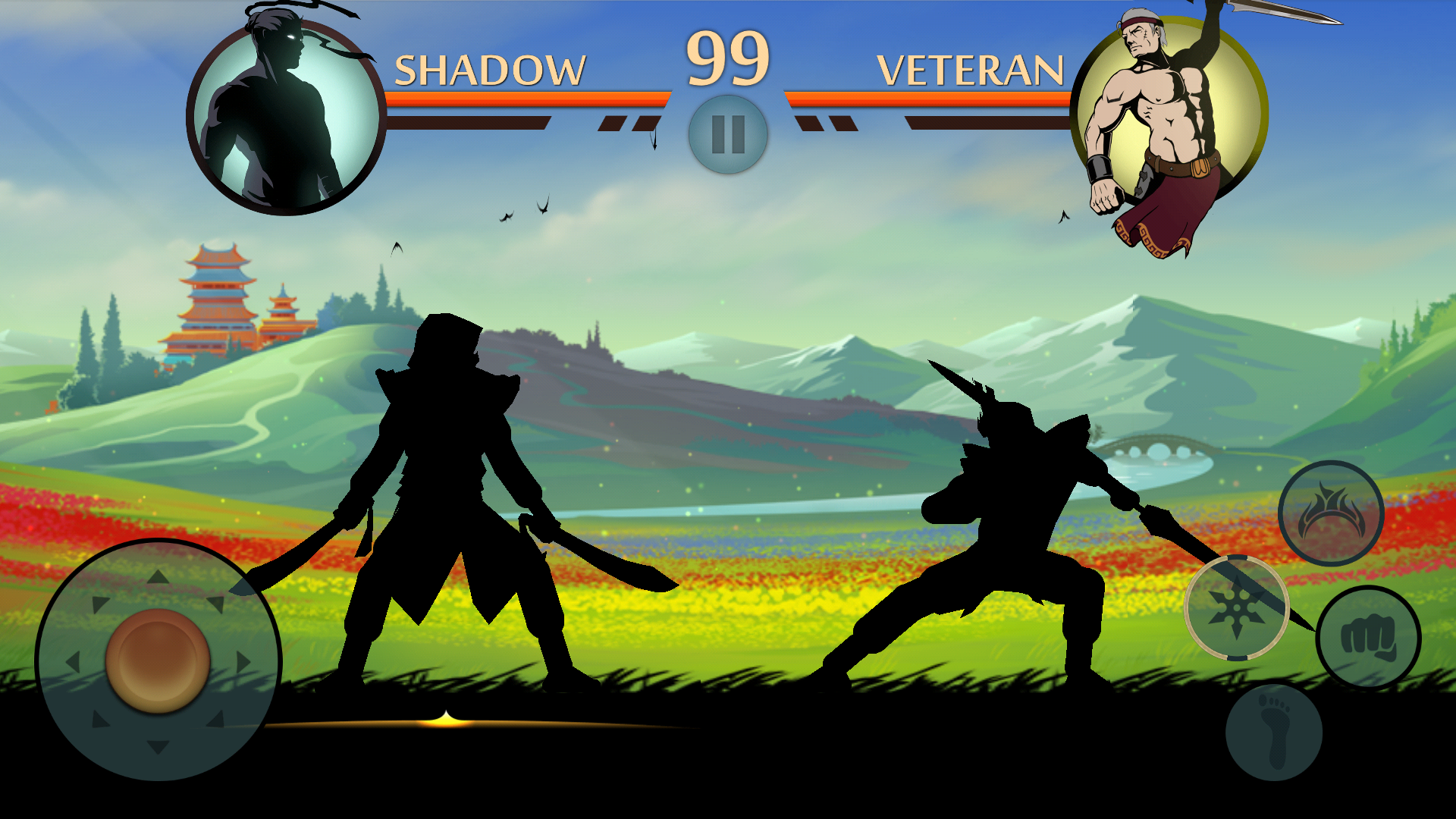 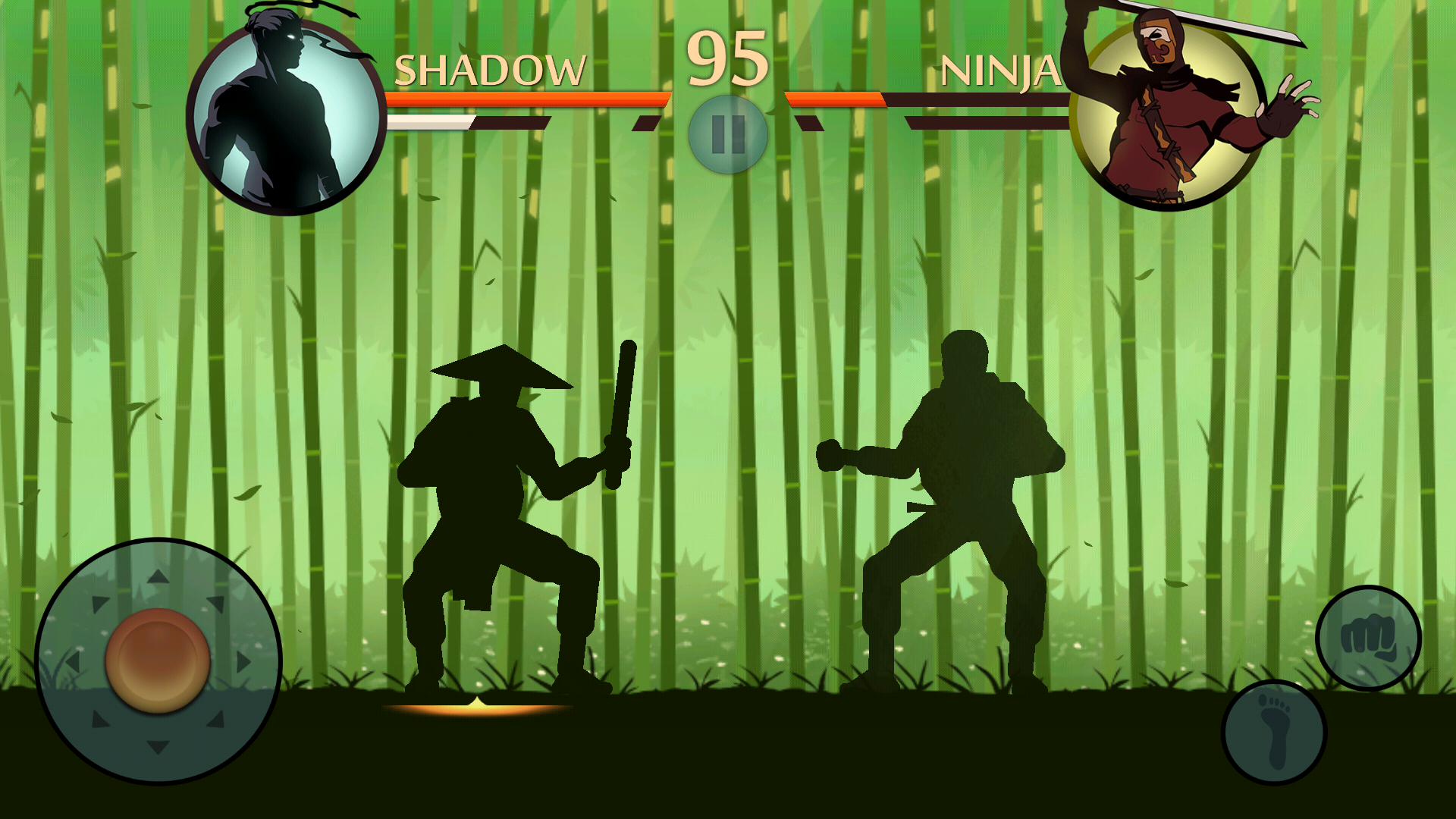 The game looks great. Fighting characters are realistically modeled in 3D yet are rendered as silhouettes against a variety of moody backgrounds. I’m still not certain whether the choice for the pitch black foreground characters is laziness on the texture artist’s part or an artistic choice, I have my suspicions.

The animation and maneuvers are realistically depicted based from real to life combat forms and martial techniques. In addition to fists and feet, weapons animations are fluid and deadly. Impacts smack hard, and opponents who are struck by an attack flop around realistically taking advantage of a robust rag doll physics engine. It all looks very well animated and very shady.

The sound effects are a mixture of stock *thwacks*, *biffs*, and blade *shrings* that one would expect from such a title. Voices are limited to a series of incoherent grunts and “oofs”. Seeing how the story isn’t the selling point, there’s really no requirement for voice acting. Although there is a nice animated intro piece with high production values at the beginning of the game. The soundtrack is a forgettable fusion of traditional oriental instruments and driving electric guitar riffs attempting to build tension during battle. The OST is for sale and tries quite hard to sound badass. Although I found it un-annoying, it’s pretty forgettable and full of fried cheese wonton.

The gameplay is where a seasoned sensei might begin to see a dull edge upon Shadow Fight 2‘s flashy prop sword. The combat isn’t bad, it could use some serious refinement however. I like the pacing of the fights. They have a slow, methodical stand off or show down feel toward them. The combat relies more on timing and critical strikes as opposed to button mashing x77 hit combos and juggling opponents indefinitely into the stratosphere. In fact that strategy will get you quickly killed, patients wins the bouts. However, in close quarter situations, the pacing can become drastically frantic. I found it best to flip away from close proximity situations, although each weapon has different reach advantages, and are ideal to particular distances. You’re more or less forced to trade in your weapon after each level, so knowing each weapon’s strengths and weaknesses is paramount. 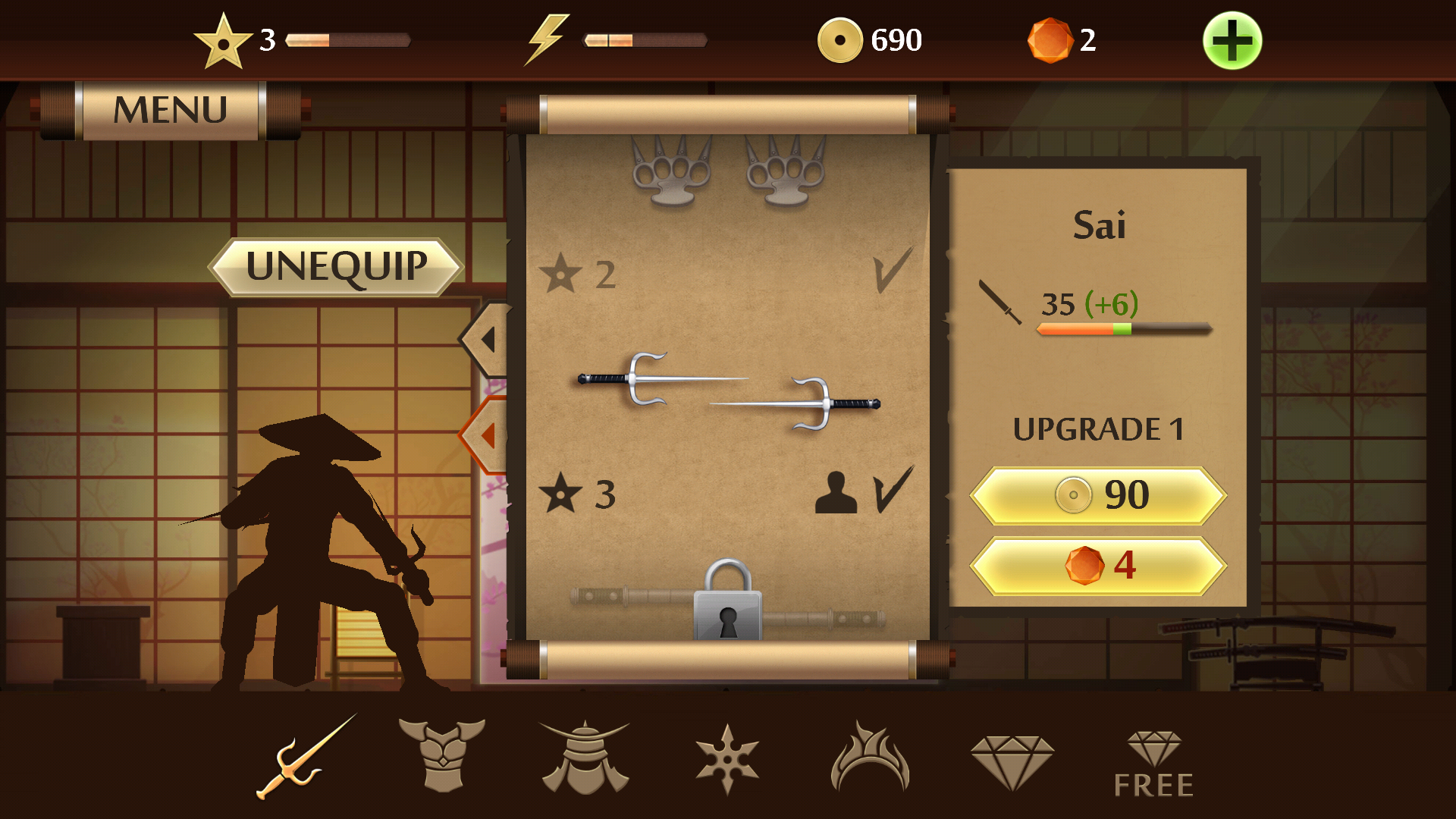 It is quite satisfying to see a well placed thrust kick land squarely on top of an opponent’s unguarded dome, rewarding the you with a headshot critical hit. However hit detection is seriously flawed. There are plenty of instances when attacks looked like they should have contacted and did not and vice versa. I unsuccessfully threw a stationary front kick toward an enemy and whiffed, while they in exchange made brutal contact with my character by throwing the precisely exact same type of kick, without either of us budging to close the gap. Lower abdomen hits have registered as headshots. It gets especially confusing and frustrating while in close quarters. The action appears as an amorphous black blob of swinging limbs and blades. A cluster shadow where you can’t tell who’s who and button mashing will still get you killed. Hit detection looks great when it works, which is about two thirds of the time.

Shadow Fight 2‘s controls on a phone (Galaxy S4) are unequivocally atrocious! The two attack buttons, punch and kick, are pinhead small, missing the desired move is almost mandatory in the heat of combat. EVERY match I’ve played, there were multiple mistakes I’ve made due to the poor layout of the controls. The directional pad is way too small; I’ve jumped high to fly the dragon when my intention was to crouch the tiger. Far too often you are punished with an iron fist for making the wrong move, which is fine, but not if the controls are at fault. The stated “feature” that Shadow Fight 2’s controls are optimized for touch screen, is like a tasteless fortune from a sour cookie. This is a game that almost requires physical controls, or at least a very clever swipe system that will negate the use of the abysmally “optimized” virtual controls. If I had a gem for every instance of wonky controls costing me the match, I’d never have to watch a 30 second ad again, but more on that later. 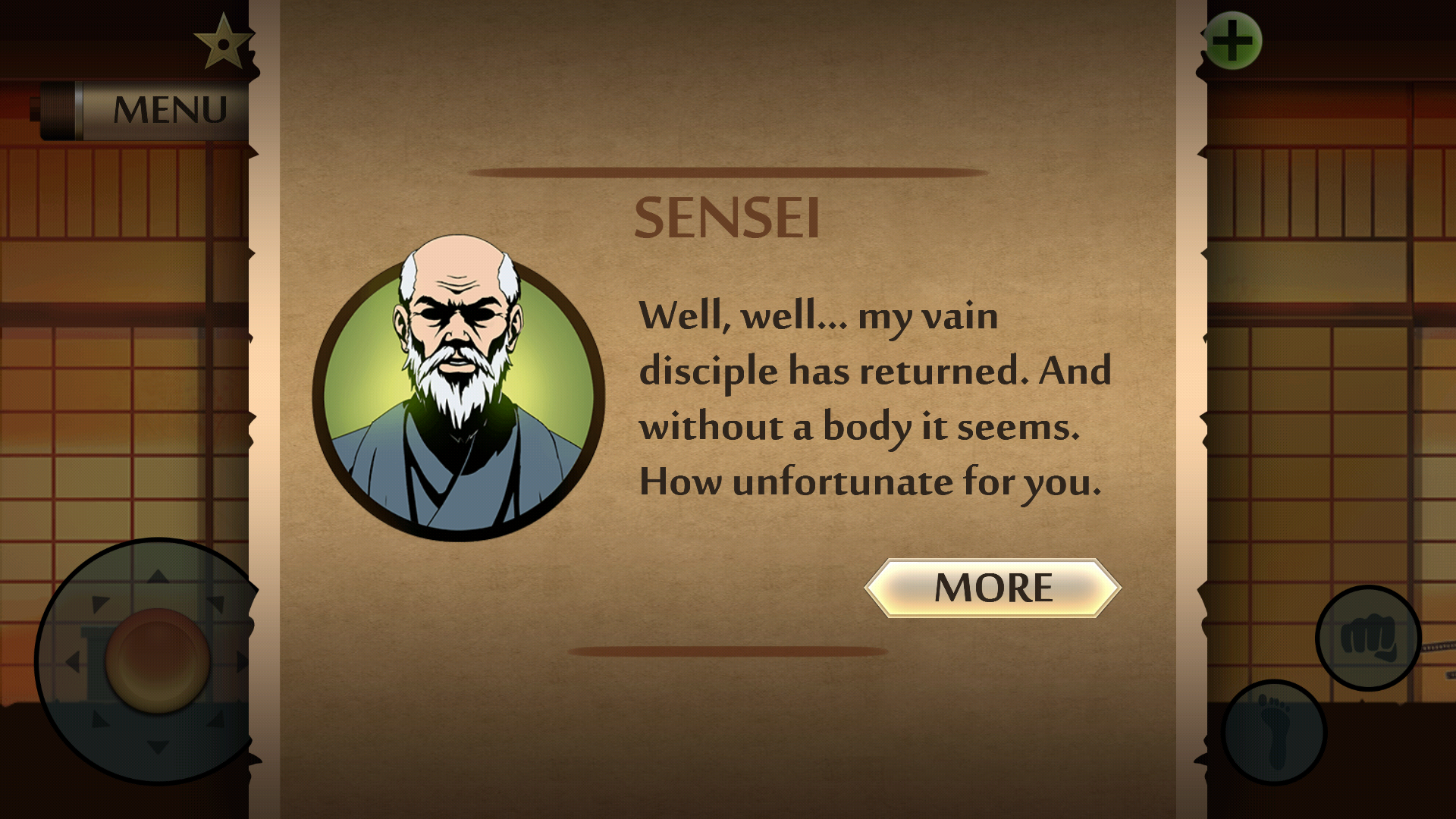 As the game starts you are presumptuously insulted by your new/old master as you return from whatever happened in the first Shadow Fight. You are given a quick tutorial of the basics, which are fairly bare-boned as far as having any resemblance to an RPG. There are a few modes: A Story, which pits you against a series of increasingly difficult guards in the hopes of defeating a demon boss. There is an uninspired sudden death style arena with waves of enemies, with minimal payout. There are also timed duels, meaning that upon completion of said duel, you have to wait for a timer to count down until engaging in the next duel. Lastly there is a tournament, where you more or less have to defeat a succession of increasingly difficult “characters” or more shadow opponents. Kill one move on to the next, but level up first. It is all a very tedious grind unless you’re willing to more or less pay your whole way through with IAPs. Which brings us to the implemented currency system.

As expected, there are two currencies of course in this freemium title, and another even more despicable element, that I’ll get to. All work in coherence to ensure even the deftest of ninja will struggle to grapple hook his way over the eventual pay-wall/difficulty spike/death grind. Even the most dishonorable and wily ninja is going to have to line up at the gates and pay the toll like everybody else. I mean seriously, what Ninja pays to do anything? Aren’t they just supposed to just flip out, throw a smoke bomb, revealing a pile of corpses strewn about, or something? Anyway, we’ve got your standard coins along with the dreadfully shiny gems, both of which are always in short supply. As if that wasn’t enough, Shadow Fight 2 has decided to incorporate an energy bar that drains after each fight. After 4 fights, many of which you will often lose in later levels, you must pay to replenish your energy to continue losing. There is however another option, if you want to call it an “option”… 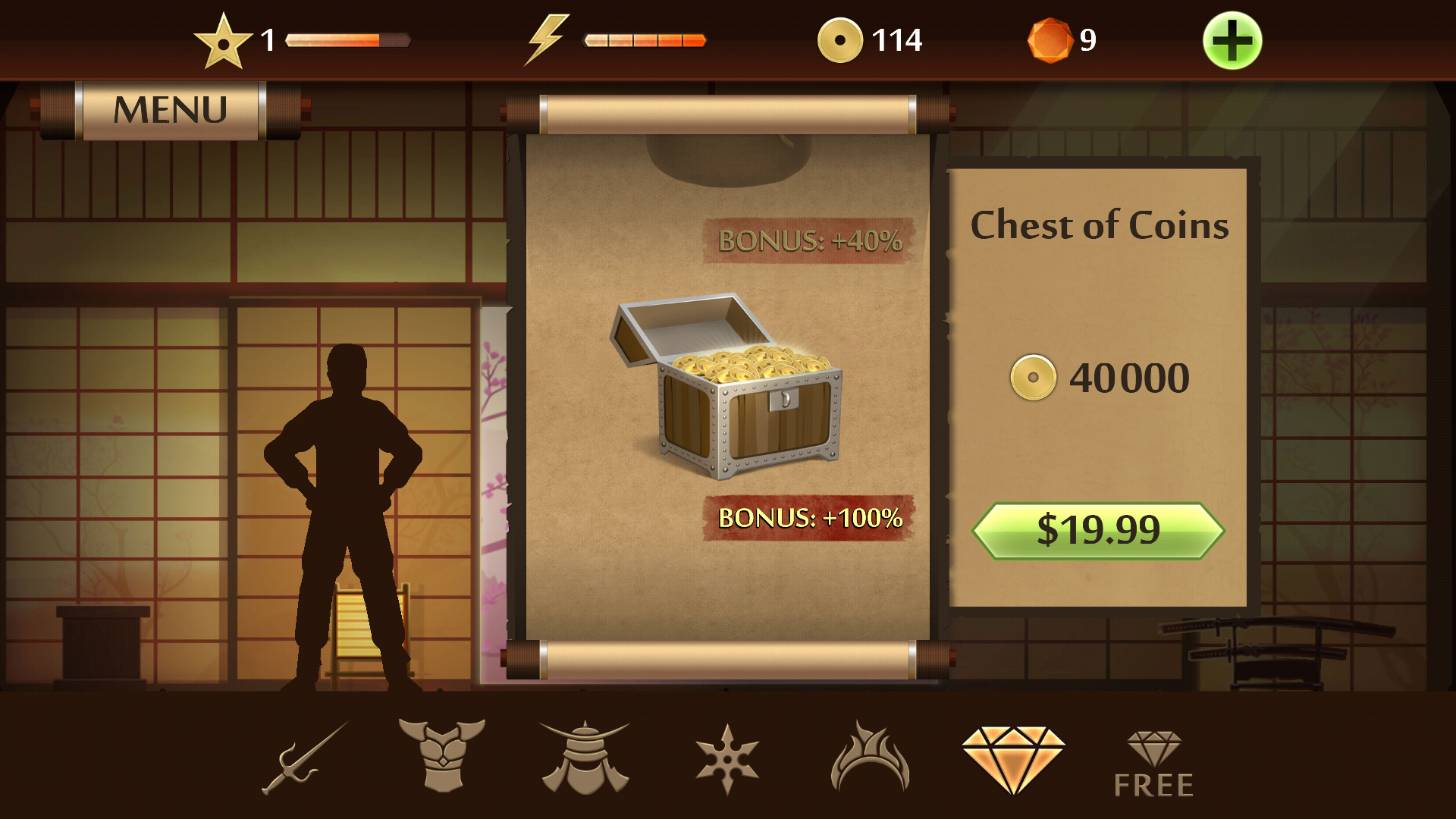 You can watch 30 second video commercials for other games and television shows that would make Bruce Lee trip over himself and Chuck Norris’ beard fall out. After slogging through the grueling 30 seconds, you are generously rewarded with a single block of energy (1/4). That equates to one more fight, after which you will be forced to repeat the process. The same method can be used to obtain one single gem, which amounts to nothing, considering how many gems it takes to buy even low level items. Each video actually leads you to another freemium title with  the exact same business model, and so the vicious cycle continues. Say that you can fork over a few bucks, well it won’t last! It’ll only be a matter of time before the jewels run out again and that’s how it goes. After watching enough of these mind numbing videos, you’d rather take a shuriken to the eye!

Shadow Fight 2 DOES have the potential to be a very good if not great game! They just blew it and went the greedy path, and sadly it worked. If only they had focused more on refining the controls and improved some of the combat mechanics instead of focusing on how to milk players as best they could with a nickel here and a dime there. They could’ve marked the game at a reasonable price or at least had some sort of unlocking feature for say, $2-$5 that I’d I would’ve been happy to pay. Or maybe even a coin multiplier. I’ll say that while mechanically speaking, Shadow Fight 2 is refreshingly solid and unique, its business plan however, is not. It’s all too familiar, actually…

As a side note, I’ve actually underwent some rather extensive training and conditioning myself. My dojo, of course, was a mystical realm, that existed in ancient times. Very few today exist, they are only whispered about in legend. Many disciples would gather at these dojos and socialize and train together. I’m speaking of a video arcade of course! They were chocked full of similar tournament fighters as Shadow Fight 2. Some games went on to become great legends, and others scornfully remembered as shameful disgraces. Shadow Fight 2 is strictly an isolated individual experience, which aims to trap the single player into a more or less pay-to-play system, not unlike the arcades that I remember, but there’s no social element. This game could really benefit from a local vs. mode, and without having to pump gems into your phone please! Something is missing. It has potential but the business model got in the way. A ninja smoke screen has apparently been thrown in the eyes of the vast majority of the 5,000,000 downloaders who gave Shadow Fight 2 a full five star rating. Why do people accept this? Grasshoppers.