Disney Tsum Tsum is a puzzle game that has been a success in Japan, and has now been available in the United States for about a month. As a Disney fan I was enticed by the Disney characters used in the game. As a jaded gamer I was skeptical of whether I would actually enjoy it or not, I’m not particularly thrilled by these kind of timed puzzle games. I was pleasantly surprised by my reaction.

Based off of a line of plush Disney toys called Tsums, the plushes themselves come in three different sizes that can all be stacked together. This is important to know because the game is based around this concept. The opening cut-scene depicts the Tsums playing at night in a Disney Store, then stacking themselves before the store opens. The game itself has you connecting as many of the same Tsums as you can in one minute game sessions.What makes Disney Tsum Tsum unique is that each Tsum has a different ability. For instance when you use a Minnie Mouse Tsum, you can connect her with both Mickey and Minnie Tsums, which helps you achieve larger combos, higher scores and more coins. Occasionally a large Tsum will be dropped into the game, when you connect these with other Tsums it helps you both in your score and amount of coins earned.

Each game uses a heart that can only be replenished by waiting or by spending in game coins. The coins may be easy to come buy, but you only earn a little of them at a time. As of writing this I have three Tsums, and get about 75-150 coins per game. Coins are the main currency of the game, and are used to buy more Tsums. However Tsums are expensive and are chosen randomly when you buy one. 10,000 coins buy a Tsum from the Happiness Box, which consists of the main Disney characters (Mickey, Donald, Goofy, etc.) along with Winnie the Pooh characters. There are only so many that can be picked so if you end up getting one you own it will level up that Tsum, of course there is a level cap of 5.

The Premium Box plushes have a wider selection of characters, including a roster of Pixar plushes, but come at the price of 30,000 coins. As mentioned earlier you don’t earn many coins per game, and the only other ways to get coins are by inviting friends to play, or by purchasing them with rubies. This is my first review with DroidGamers, so you may be unaware that I am not a fan of micro-transactions. 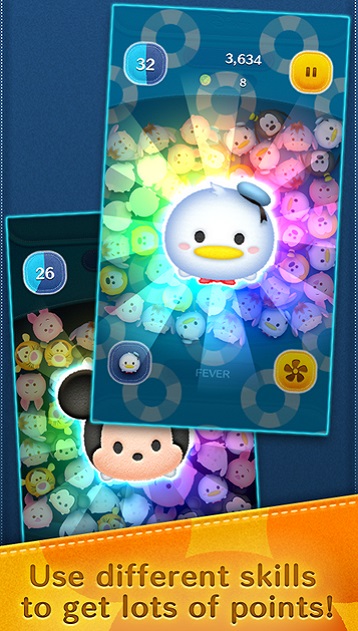 Rubies can be used as a way of getting large amounts of coins fast. However you rarely receive them, so if you want to earn them you have to spend real money. This is an example of a game that I really wish had a premium version available I would love to to play it without messages telling me that I can get more coins by spending my rubies. I’m not asking for the game’s publisher not to make money, I would just rather give it to them in a different way.

Honestly I have been having a lot of fun with this game, The cute Disney Tsums have made me really want to buy some of the real plush, and I’m sure that is what Disney is hoping for, I just don’t like constantly getting offers to spend money, and I also don’t appreciate that you always have to be online to play the game (you have to start an account with Line, the game’s publisher). However, I know as someone covering Android games, this is what a lot of the industry has to offer.

I wouldn’t mind spending money on this game, but personally it feels wrong to spend my own money just to make the game easier. Even though those parts do bother me, I still recommend you check the game out. Its cute, addictive, and fun.