The dust has just about settled from Flappy Bird’s viral success, a success so great it prompted its creator Dong Nguyen to pull it from Google’s Playstore and Apple’s App sore, and he’s released another one.

Nguyen’s latest creation takes the maddening Flappy Bird formula, turns it on its side, changes the graphics from Mario-esque to Donkey-Kongesque, and makes it slightly harder. I found Flappy Bird addictive for a few days before I got bored and uninstalled it. It was a hard game, but after playing it for maybe forty minutes I could get past at least three or four pipes every round- no problem. 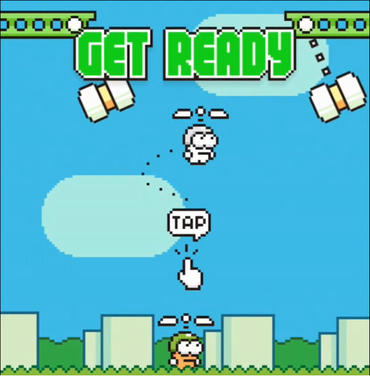 Maybe I’m just not as nimble as I was a few months ago, or maybe I’ve had a lot more coffee tonight, but Swing Copters is infuriatingly difficult. The cute little bug-eyed helicopter shoots, and he really shoots, from side to side, and tapping changes his direction. Leave him enough time to gain momentum and he zooms of with the inertia of that stone head from the opening credits of Monty Python’s Life Of Brian. My high score is still two. Perhaps I’m not cut out for this..

So it’s basically the same game, still free, on its side, with different graphics. It knows what it is trying to be, and it does it very well. Some people will love it; a lot of people will hate it, and it’ll be interesting to see if Nguyen will pull it down if it reaches similar levels of notoriety as Flappy Bird. Oh, and there’s already multiple clones of it out.