If you are looking for a high-quality Game Book Adventure, all you have to do is visit the Play Store and search for Tin Man Games. They have over twenty titles available to download. Known for their Fighting Fantasy adaptations, this time around, they chose to go a different route. They created an interactive graphic novel. You are the main character and you are a superhero in Titan City. Thus begins your foray into fighting crime and standing for justice in Steve Jackson’s Appointment with F.E.A.R.

What is most enjoyable about this title is that Tin Man Games stays as closely as possible to typical comic book illustration, story lines and language. The in-game music fits perfectly with whatever is taking place in the panels. If you enjoy reading superhero comic books that are more whimsical in nature, then you will more than likely enjoy Appointment with Fear. The game controls require only touching the screen to advance the panel or choosing what you will do next. This is where Appointment with F.E.A.R. really shines. It is all about the choices you make. 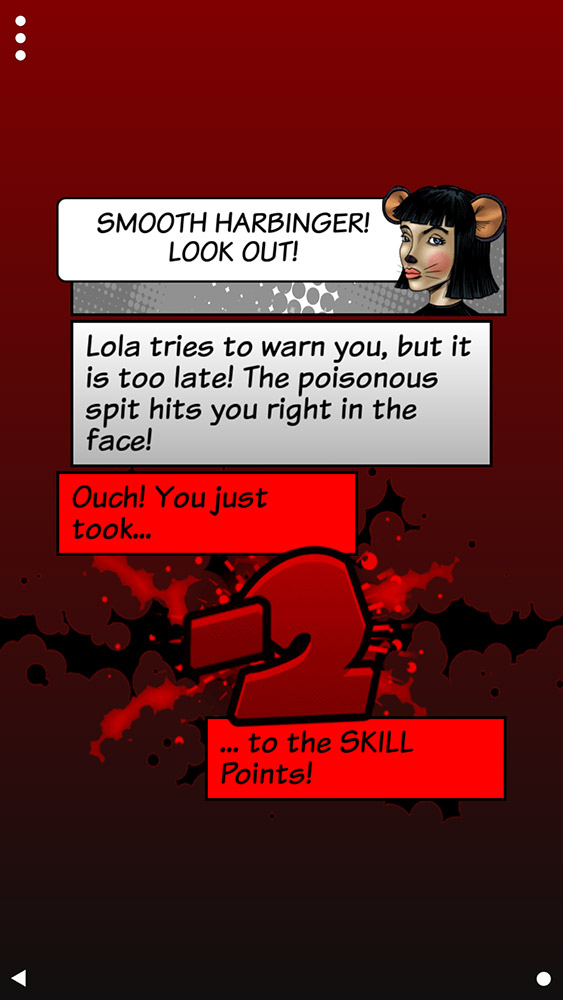 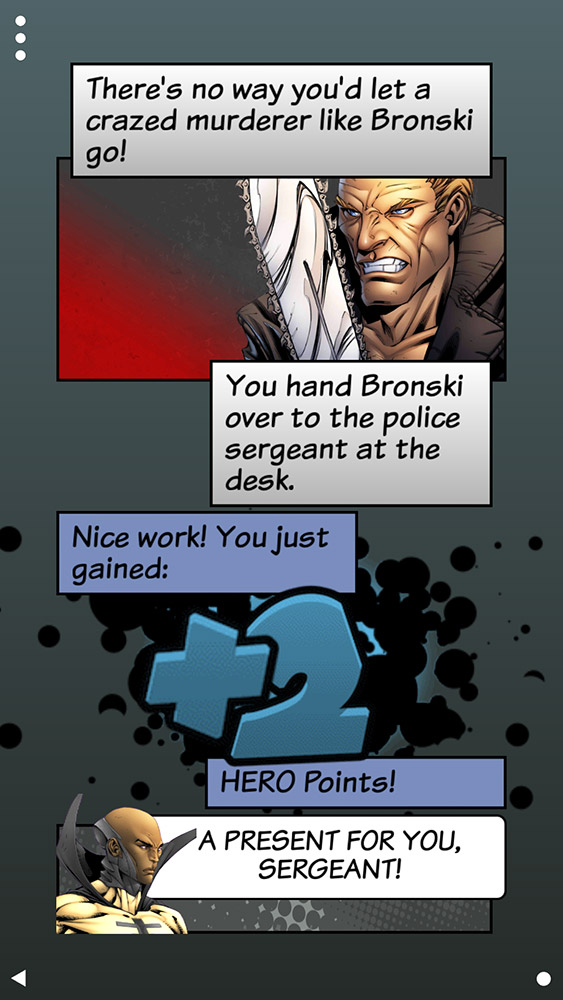 The game begins with a little bit of back story and then you have to choose your gender. This is a great thing because it is something that is still missing in a lot of games today. After you choose your gender, you pick out your costume/look. There are a myriad of choices here. The only thing more important than your costume or your super power, which you get to choose that too, is your superhero’s name. The list of names is pretty extensive. I would have liked the option of creating my own super hero name, but I understand how that would have made things more complex. I finally settled on Smooth Harbinger, a journalist that has psionic abilities. I was ready to take on Titan City… or so I thought.

Travel back to the 1980s as a super powered defender of justice in this all new edition of Steve Jackson’s Appointment with F.E.A.R.! This dynamic edition is stylized as an interactive graphic novel. Your choices guide you towards new villains, super dilemmas, and ultimately, the Titanium Cyborg himself! As Titan city’s courageous and incorruptible champion of law and order, use your super powers to protect its innocent citizens from danger and deviousness of a host of super-villains bent on taking over the world! – Tin Man Games 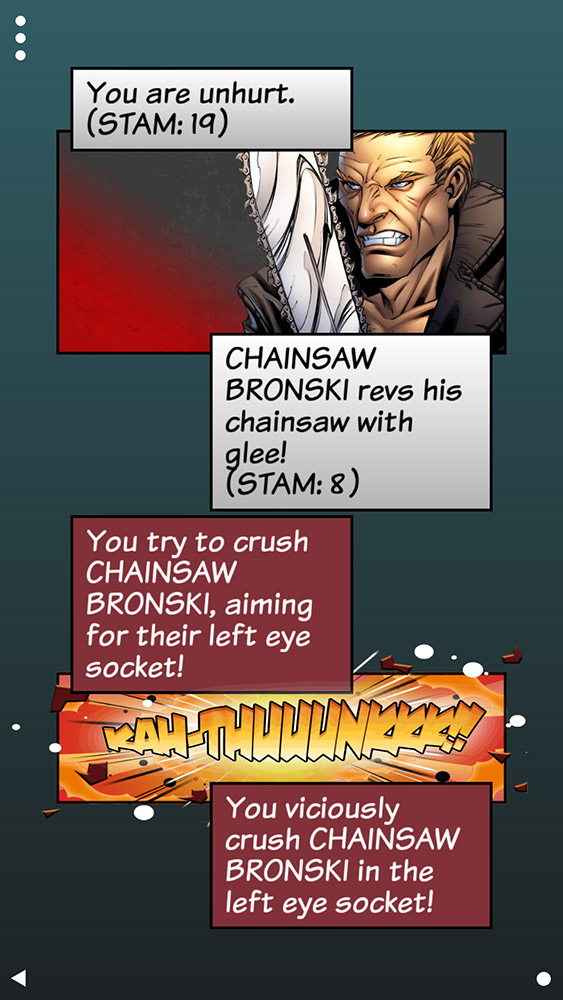 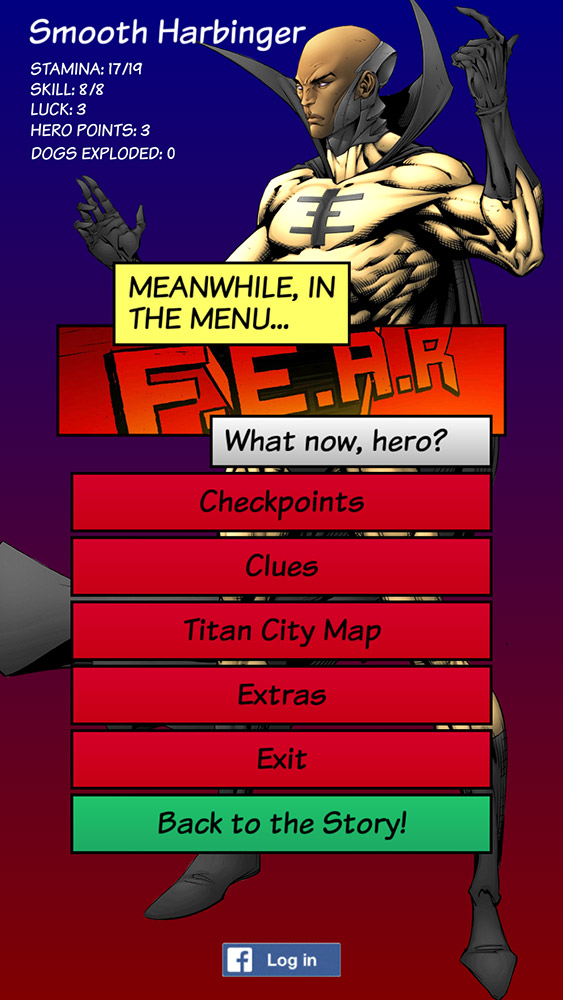 How good of a crime fighter are you? That largely depends on what you choose to do when you meet a villain. When you meet a villain you will know what their stamina is. Your character has the following points to maintain: Stamina, Skill, Luck and Hero Points. What you choose to do in battle will affect your stamina as well as that of your opponent. Once your stamina or your enemy’s stamina is depleted the battle is over. You have three choices in each battle and the severity of your choice of attack will impact that of the enemy. Your skill points must be higher to be able to complete some of the attacks. The main goal of the game is to find out where the top-secret F.E.A.R. meeting is taking place in Titan City. You have three days to find out before something unthinkable happens. In this adventure you will have to fight the Titanium Cyborg and many of his henchmen. If you are successful finding clues and solving crimes in Titan City you will gain hero, skill and luck points. Luck points are used to obtain better in-game trading cards.

Appointment with F.E.A.R. is an enjoyable Game Book Adventure. If you have never played a Game Book Adventure on your mobile device, this is an easy one to get into and very accessible from beginning to end. It is available to download in the Play Store for $2.99.