The Walking Dead Pinball Review: A Decent Attempt At Bringing The Franchise To Pinball Fans

Some background: As a life-long fan of video arcades since their beginnings I’m also a tremendous fan of pinball machines. It has only been in the last few years that video emulation of pinball has gotten close to matching the experience. In terms of commercial pinball video games there are two very different camps: On the one hand you have Pinball Arcade that places an emphasis on making reproductions of actual physical machines, on the other you have Zen Pinball that keeps the broad strokes of physical machines in mind but abuses the fact that there are no limitations to what they can do, making only original tables. While, on the whole, I will admit I’m more inclined to enjoy the best converted Pinball Arcade machines there are several Zen Pinball machines I’ve gotten some quality hours with. Rather than have my reviews for these tables go over the merits of the game engines themselves, we’ll assume that the people reading the reviews are familiar with the base games already and are only really interested in a review of just the table itself.

The Walking Dead is a juggernaut of a property. What started as an excellent black-and-white comic has now additionally spawned a popular television series about to begin its fifth season and two “seasons” of a video game, both with 5 episodes a piece. While there are many overlaps between the comic and the TV series, they remain somewhat distinct from each other, with the television series lagging long behind the comic while also having added several characters the comic never included. The game series, while taking place in the same “universe” has thus far stayed completely separate from the other two properties, with the original season (which this pinball is based on) focusing primarily around a young girl named Clementine and the former convict who quickly became her protector, Lee. 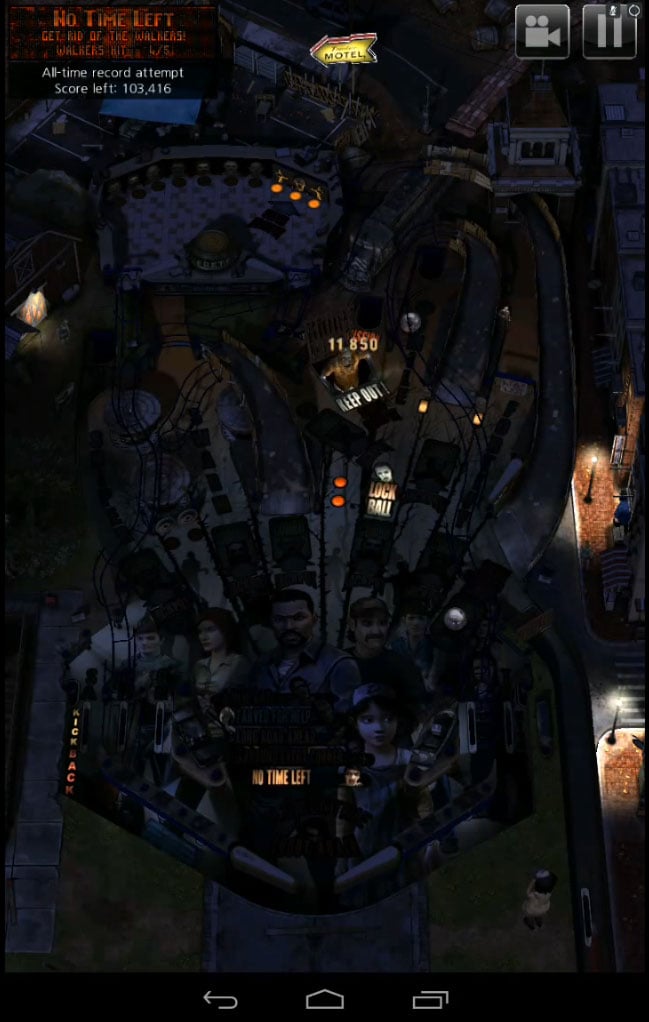 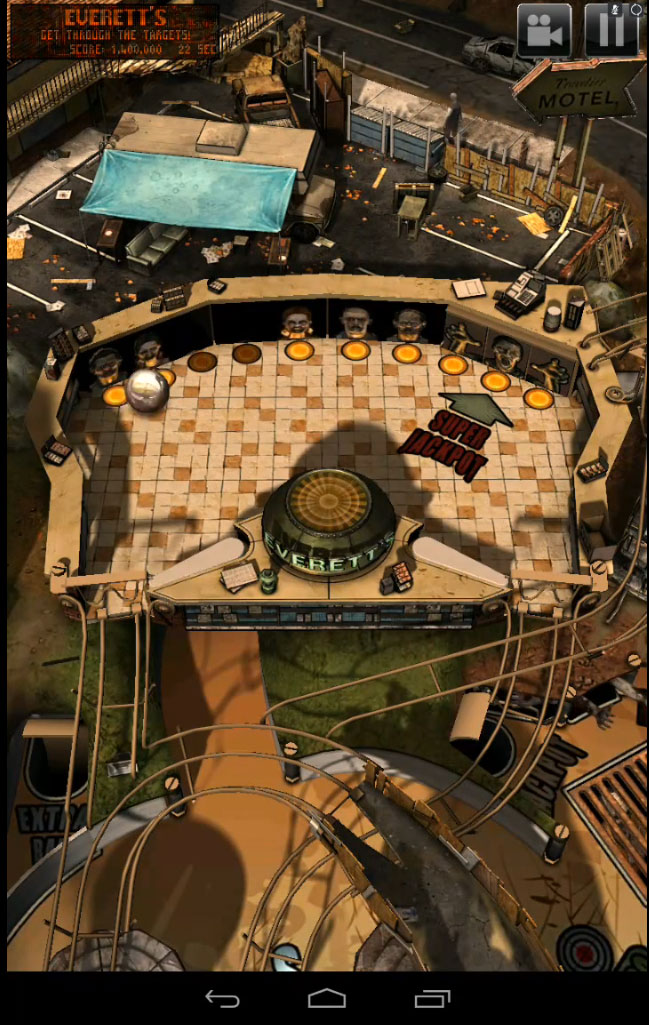 Visually the game is unmistakably matched to its source material. There are small representations of multiple locations found in Season 1, pictures of most of the core characters in the center, and 3D models of both Lee and Clementine in the foreground. While the game, as a whole, is generally pretty smooth and attractive, it does occasionally suffer a small stutter for no particularly discernable reason. While I had mentally pictured playing a pinball table on a tablet to be an experience that would favor playing in portrait mode, being able to see the entire table at once, it may be my habit from both PC and the PS Vita to have settled in to playing in landscape mode most comfortably.

There’s a decent amount of speech from the characters in the game tied to specific events happening on the table, and the unmistakable growls of zombies help to maintain the game’s theme overall. A few particularly overused speech samples began to get annoying at times, but in general the sound is appropriate and works well with the game.

Getting down to the most important element in the game, the actual gameplay, I have some good news and some bad news. For people who are fans of, and have fully played through, the original game this can be a pretty cool stroll through events and tough decisions made over the course of the game. All 5 chapters are represented with decision events that are taken straight from the game. Depending on how long ago you may have played their impact and significance will likely vary. Some decisions stood out firmly in my mind while others I somewhat remembered but couldn’t attach the consequences that may have surrounded the decision at the time anymore. Still, it prompted some great gaming memories. 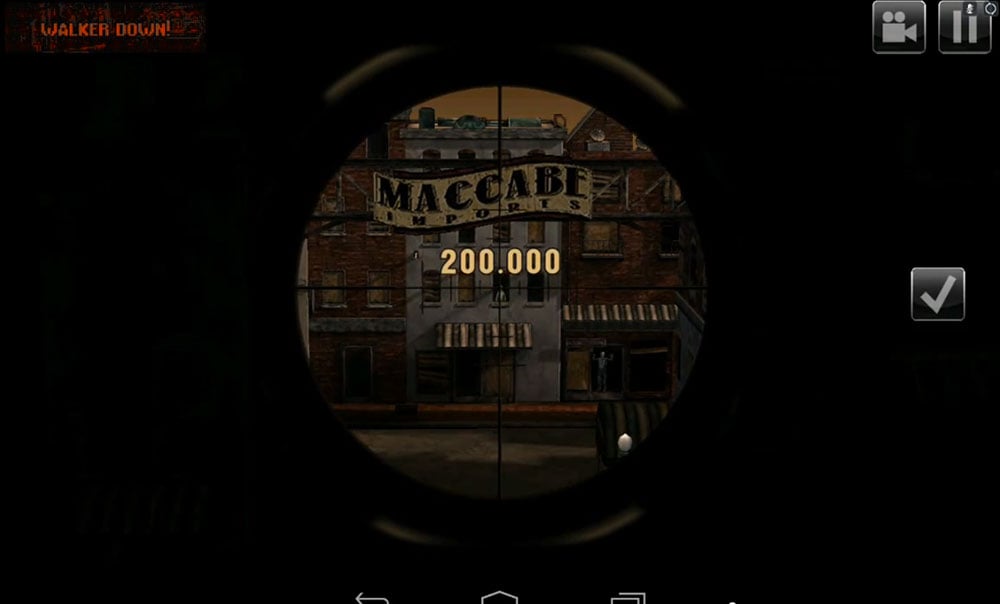 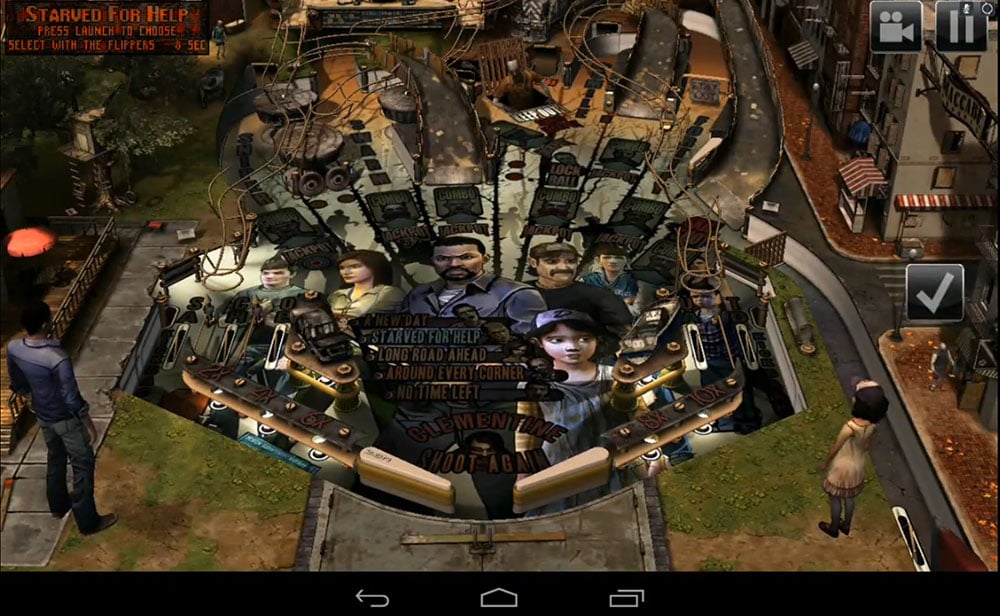 Now, for people who haven’t played the original game I’m not quite sure what to say. If you may be thinking about playing the first season at some point you may want to consider avoiding the table outright until you play the game. Not to say the event decisions are necessarily spoilers, since they lack context or attactment to characters that made the decisions in the actual game carry more weight (more on that later), but the story in Season 1 is excellent overall and made more powerful by the shock of some challenges you were faced with. This situation makes it very difficult to make a general statement for whether or not the gameplay is noteworthy as I do think people without exposure to the original game will more likely be baffled by most of this structure, but in the end you could certainly play the game fine without knowing why you were doing things one way or another. Beyond making decisions tied to the 5 episodes there are some mini-game modes like a simple sniping challenge and a miniature playfield.

In the end these digital pinball tables are measured by how likely you are to want to return to them specifically rather than choose another table. In order to keep the playing field as fair as possible I’ll only measure this table against the many Zen tables I already have. In the end I think I’d put this somewhere roughly in the 60th percentile range, certainly ahead of the majority of their original tables, but outclassed by several of their Star Wars and Marvel tables in particular. Consider, that’s as a huge fan of the original game (narratively I’d put it in the top 5 for games I’ve ever played). The tough thing here is I’m not entirely sure what I’d change to make the table’s experience better. It’s almost like the trap is having chosen to model after the game, rather than the comic or the show. By choosing the game you would gravitate to the decisions that made it so memorable, something the table is trying to do.

The issue becomes that what made those choices matter was how they fit into the story and the flow of the game, something that people unfamiliar with the game wouldn’t have any hope of appreciating and that even fans could get a jolt of memory from but it is still all very disconnected. What made the decision important and noteworthy was making it in the moment, it simply popping up two options with no context and no real reflection of the impact of your choice nullifies its value. I’d like to say that there’s something truly special about the way the table itself plays, but I’d consider it a very ordinary, though fun, table. That leaves the game changer as the property itself and it just doesn’t quite work, probably for just about anyone.

I’d consider it a worthy and earnest attempt but aside from pinball collectors (guilty), or tremendous fans of the original game or property, I find it tough to whole-heartedly recommend over several better options for Zen Pinball out there.