Mines of Mars review. Light on story, heavy on mining

Mines of Mars is a side-scrolling RPG from Crescent Moon games. For those that aren’t familiar with them, they also created the FPS called Neon Shadow, RPG RavenSword, and a slew of other games covering all sorts of genres. In my experience with their games, they don’t slouch. So to little surprise, this pattern holds with Mines of Mars.

The premise of the game is simple: players assume the role of a miner on the planet Mars, who crash lands there at the start of the game. Being the sole survivor, you set out to begin mining for your employer. There’s a bit of a mining town on the surface of Mars, comprised of refineries (for your raw material to be refined into something with monetary value), a station that refills health and fuel, along with another that refills all ammunition, an in-game arcade, and a shop where players are able to exchange your findings for upgrades in your firearms, by purchasing more and better ones, as well as upgrading mining equipment so players can press further into the planet where they’re digging. 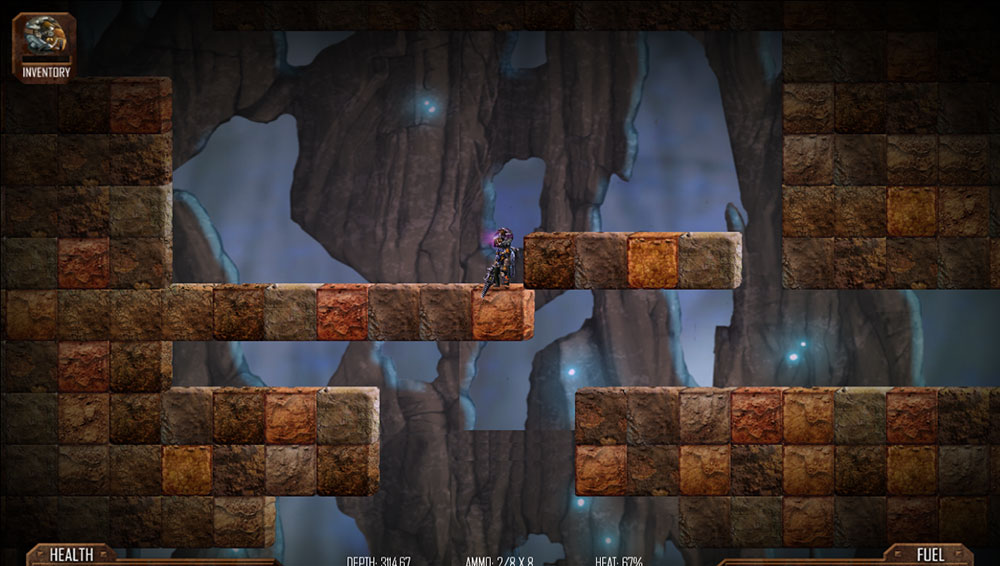 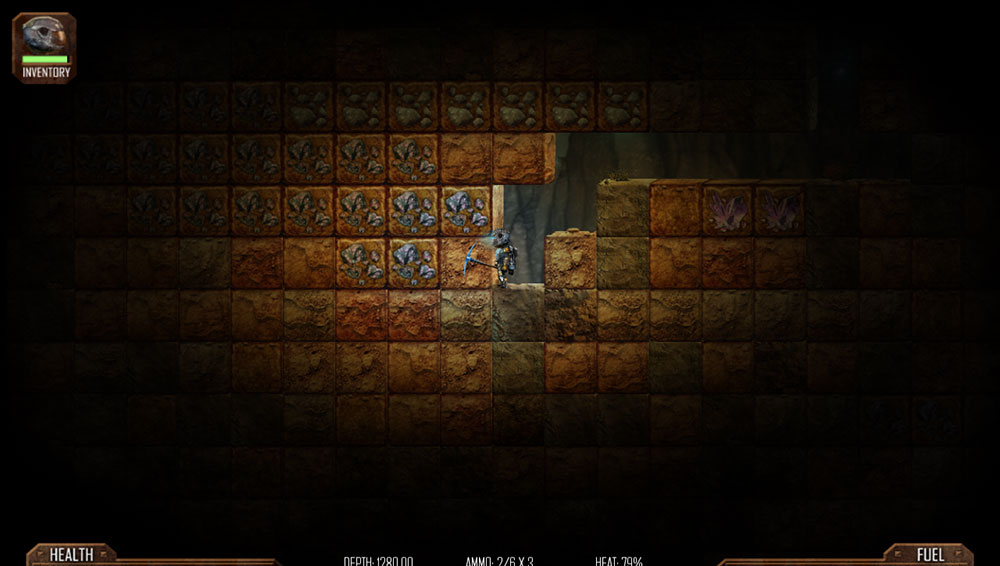 There’s a panoply of equipment, all of which is there to enable you as the player to be a better miner or better defend one’s self. Whether it’s a better jet pack to return from ever increasing depths while consuming less fuel, or an improved helmet for better visibility, so you are able to see more of the surrounding materials, better boots to run faster, or even better pick-axes to dig faster, there’s definite room for players to improve how they go about their business. Purchasing upgrades with your ore and gems unlocks the next in succession for that part; buying the shotgun unlocks the .357 revolver for purchase, upgrading to the bronze ax unlocks the cobalt one in order to dig faster, and so forth. There’s a limit to how much the miner can “carry” during one trip, so the size of storage bins can be upgraded as well, requiring return trips to the surface when unloading is called for, to occur less often. As you progress through the game, you begin to unveil a mystery about the sentient life forms that are indigenous to the planet, and why they wish you to leave. While that’s a compelling basis for a story, it wasn’t fleshed out very well and culminated with an underwhelming ending. All of this is played in a two-dimensional fashion, a la Dig Dug (if you’re familiar with that throwback game) only much more involved and on a MUCH larger scale.

In addition to the raw materials that are found beneath the surface, there are lifeforms that players encounter while mining on Mars. Some of them are hostile, others aren’t. Some of them (serving the purposes of a “boss”) are quite large and live in self-contained dungeons, and the miner is, upon defeating them, rewarded with a variety of things ranging from minerals and ore to upgrades that are otherwise unattainable. And should the miner die, he is simply cloned again, back on the surface. If the player had any mined materials in his or her possession, those are forfeited to help pay for the “cost” of cloning. The same penalty is applied to the miner should he run out of jet fuel and be unable to return to the surface which is akin to death, practically speaking. There’s also something called the “Offering Pit”, where players can offer portions of their refined accumulations in return for some obscure artifacts or chachkies. The more rare and greater the quantity, the better for chance you get an artifact instead of more raw materials. 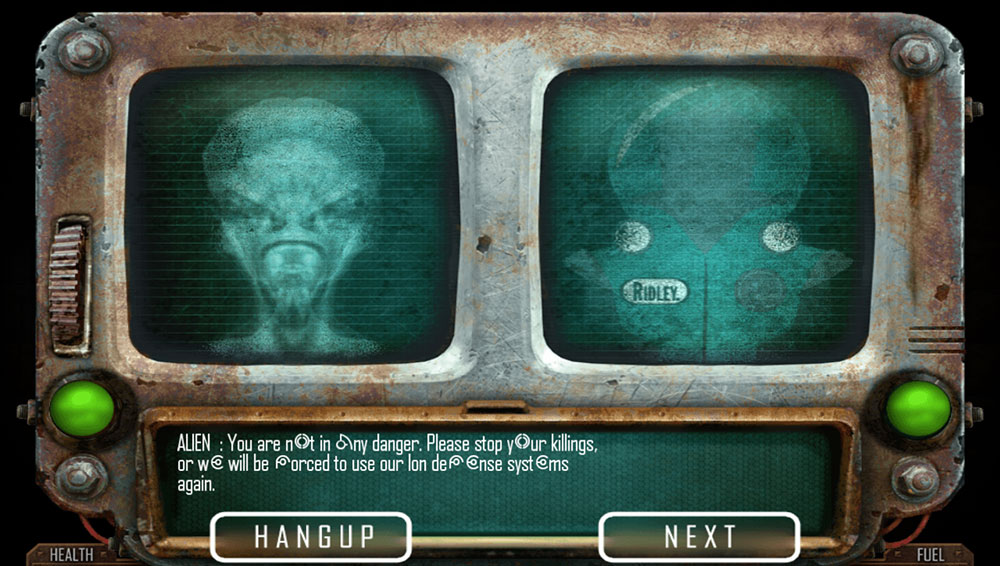 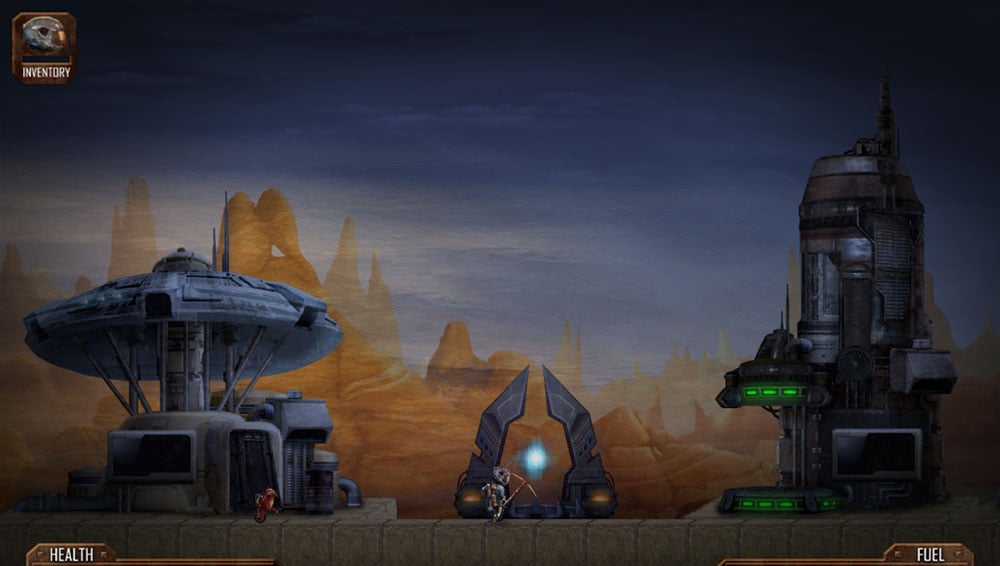 The controls for the game are a fairly straightforward use of gestures with the horizontal movements controlling the direction in which the miner is digging or running/walking, swiping downward for digging down, and up for the jet pack, all controlled on the left-hand side. Firing weapons and jumping are controlled in similar fashion on the right-hand side. There are no virtual buttons or joysticks to speak of. The sound track is very low key. The simple and repetitive tunes play a very subdued role in the game. There are times when you hear the soundtrack, and times when it isn’t played at all. While facing the boss monsters, there’s a more upbeat tune that fits with the anticipated action. Given the level that the sound track is de-emphasized to, while not completely trivial, it seems to work all the same as it pops in and out of the player’s experience.

On the whole, this game is fairly solid. It’s lengthy and well balanced (though from what I read online, the minerals and ore needed tweaking in earlier versions a. It strikes me as having been fixed). If you’re not looking for an involved story, or appreciate sandbox style games, this will be for you.