Out Now: Hit the Sand with Beach Buggy Racing from Vector Unit

Vector Unit has released a sequel to its popular racing title Beach Buggy Blitz. The new game, Beach Buggy Racing, is now available to download for all racing fans that enjoy more arcade type racing. If you are unfamiliar with Vector Unit, they have produced high-quality, visually engaging racing games such as Riptide GP, Riptide GP 2, Shine Runner and of course Beach Buggy Blitz. Some of you may know their game Hydro Thunder Hurricane which was released on the XBox 360. What is amazing, is that Vector Unit produces such amazing games with a team of four people. If you like fun racing with lush visuals, power-ups, big air-time, zany characters and vehicles, Beach Buggy Racing is for you. 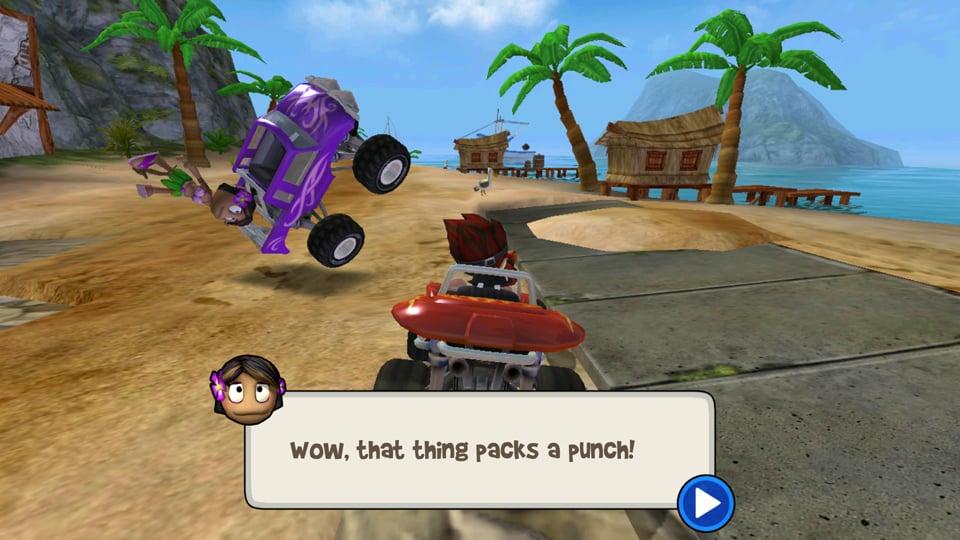 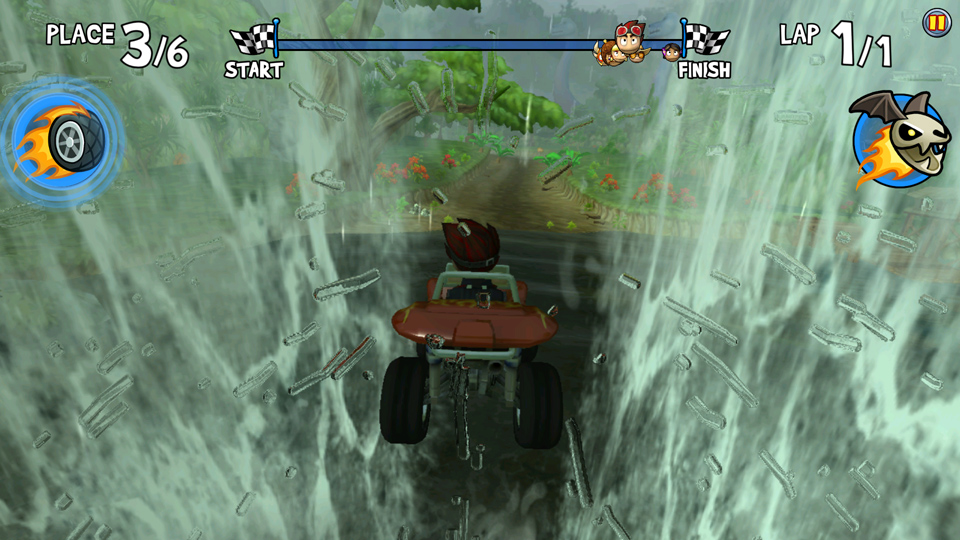 Vector Unit has always impressed us with the graphics in their games. Riptide GP and Riptide GP2 were often used to show what is graphically capable on mobile devices. Beach Buggy Racing is released to coincide with the Nvidia Shield Tablet 32 GB-LTE that will be available at the end of the month. The good thing for the Android gaming community is that the game is also currently available for all Android devices. Continuing with their focus on producing fun and graphically compelling games, Beach Buggy Racing has a multitude of things to offer for those that enjoy arcade racing on their mobile devices. 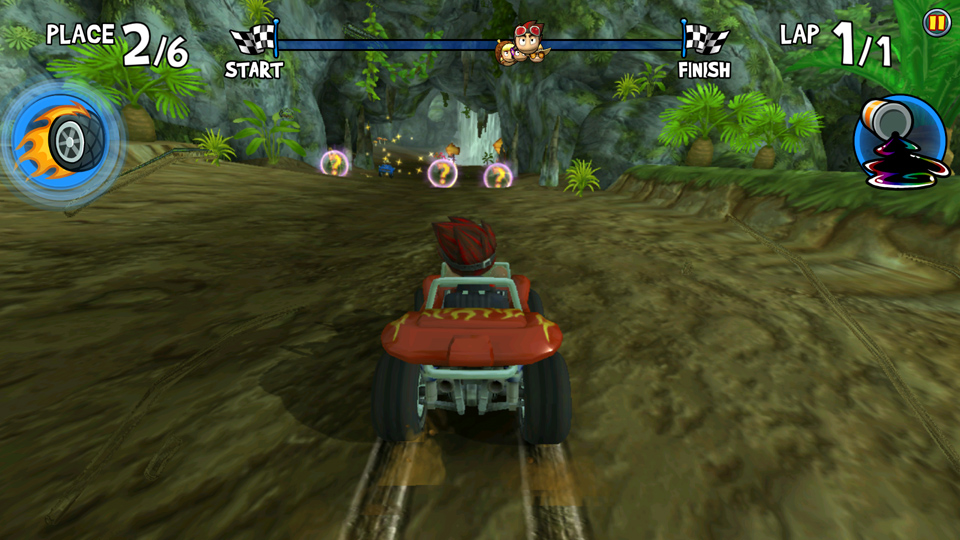 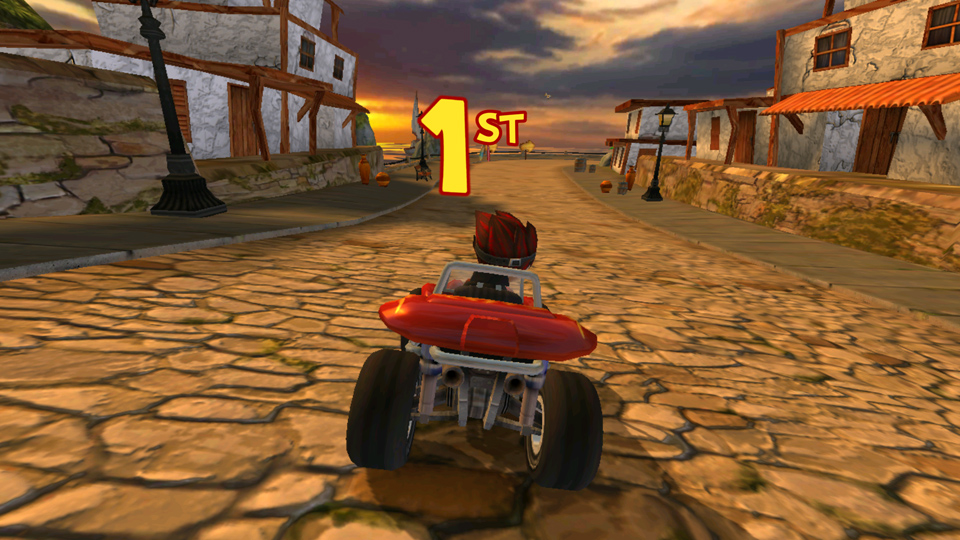 My brief amount of time spent with Beach Buggy Racing was enjoyable and challenging. First, as mentioned previously, the game’s graphics are really, really good. I was not playing it on an Nvidia Shield Tablet, but I was still impressed and can’t imagine how nice it would look on the Nvidia Shield. That being said, graphics alone don’t make a good game. Vector Unit shows in Beach Buggy Racing that they know how to make a good racing game. Having twelve different tracks and multiple types of racing goals makes this game worth playing. If you enjoy kart racing games, you should be right at home with Beach Buggy Racing.

There are plenty of power-ups placed throughout the game. This allows you to slow down your competition and this happens a lot. You have to think about who is ahead of you and who may be sending a rocket from behind you to kick you off course. At the top of the screen in a simple graphic line and it shows who is ahead of you and behind you and their proximity. This is helpful when planning an attack. It would be nice to have a smaller image of the map too, but there isn’t one, so you have to get familiar with the tracks to get the best times.

The controls in the game are extremely responsive. The tilt controls are probably the best in a racing game that I have experienced in a while. The other options include two types of touch setups and you can use a USB/Bluetooth controller. I like the fact that Vector Unit has given gamers multiple options with how to control the karts in the game.

The game is broken into different racing series.You start of with ‘Easy Street’ which has eight races and a boss race. Winning the boss race unlocks the next racing series, which in this case is the ‘Coconut Cup.’ That follows with six other racing series, so the game does have quite a bit of depth. In each race you are competing for the quickest time or other types of goals. If you win you get three stars. The amount of stars also helps to unlock the next race within the series. If you finish first, meaning you get all three stars, you are awarded a ticket. Why a ticket you ask? Well, you get coins as well, but tickets are what matters the most and here is the reason why. Beach Buggy Racing is a free-to-play title and this is the only thing thus far that has been a little bit disappointing. 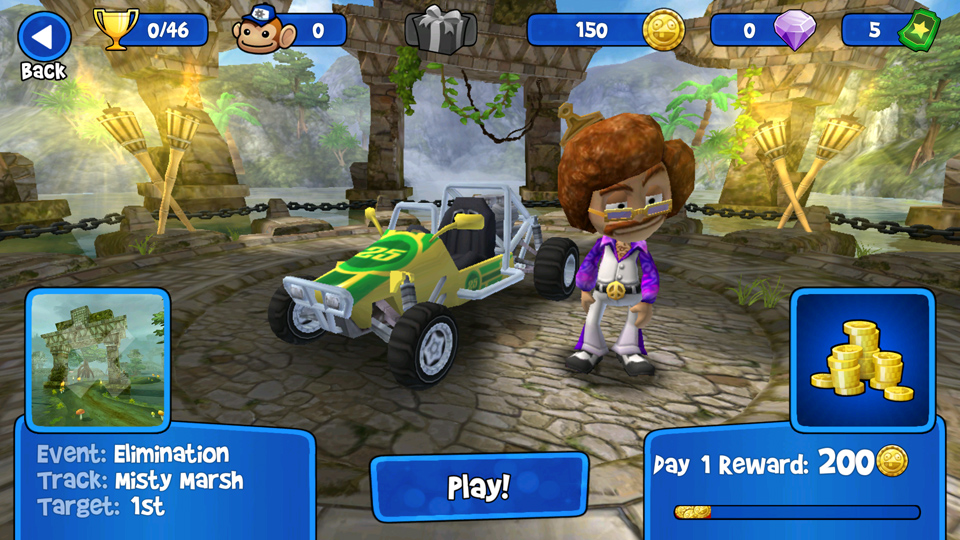 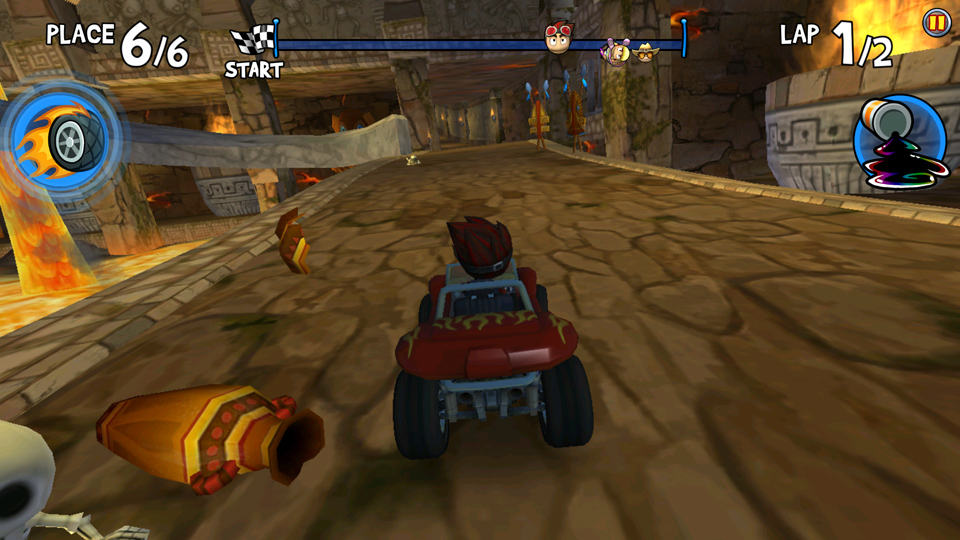 Each race, which there are many in this game, require a ticket. If you don’t win that race, you will have to try again and it will cost you a ticket. As with most with most free-to-play titles, you have to wait for a while if you run out of energy, or tickets in this case before you can play again. I was disenchanted when I ran out of tickets and saw I had to wait twenty minutes before my five tickets were replenished. Yes, twenty minutes! Talk about taking you out of the game! I think I was more frustrated about this with Beach Buggy Racing because it really is fun playing and it has that affect on you that you really want to go another round when you don’t win.

Now, all is not lost here. There are different options that allow you to keep playing if you don’t have any tickets. You can purchase 5 tickets for two gems, watch a video/ad for one ticket or Go Premium for $4.99 which presumably makes the game ad free. I am not sure how this affects the ticket structure since I have not chosen this option yet. I want to confirm with Vector Unit about the ticket structure if I drop the $4.99. So at least they have given you have some options. The videos range from 15-20 seconds, but that is a lot less time to wait than twenty minutes or less depending on where you are in that time cycle. The in-game currency consists of gems, coins and tickets. Gems are awarded for completing achievements and coins for making it in the top three in a race. You use gems to hire grease monkeys to tune up your car, coins to upgrade your car or to buy new vehicles or to customize it.

Overall, Beach Buggy Racing is a game that you shouldn’t miss. Even though it is free-to-play, it is definitely worth a download for you to try out. Whether you continue playing will be based on how the in-app structure affects you. If you expect to be racing for a while, you have to be patient or at least use the different options to aid you in progressing. The game is integrated with Google Game Play Services with Cloud Saving and 46 achievements. It was nice starting off on my phone and then moving to my tablet by having a cloud save game present. If you enjoyed Beach Buggy Blitz or really enjoy kart racing arcade type games, Beach Buggy Racing is available to download now. I enjoyed hitting the beaches at full speed with this game, maybe you will too.